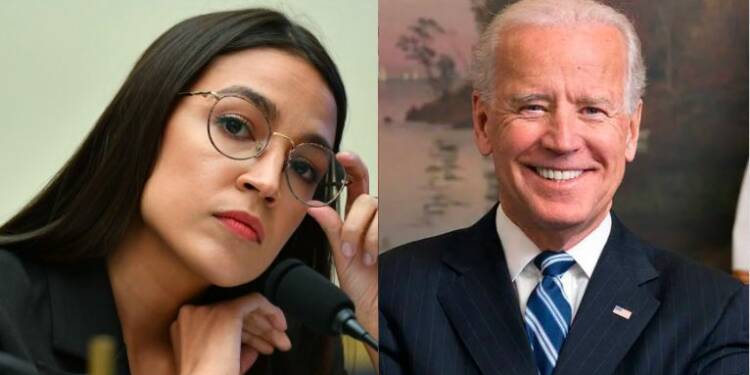 During a virtual town hall meeting late this week, far-left Rep. Alexandria Ocasio-Cortez (D-NY) praised Democrat President Joe Biden, saying that his agenda has “definitely met the standards” of the far-left and that he has been “very impressive.”

Ocasio said on Friday last week, “One thing that I will say is that I do think that, by demonstration, President Biden has definitely exceeded expectations that progressives had. You know, I’ll be frank, I think a lot of us expected a much more conservative administration. And I think that his, not only what has ultimately come out, but the active invitation and willingness and collaboration with progressives in his first 100 days, or almost 100 days, has been very impressive.”

Although Biden attempts to depict himself as a centrist, he vowed on the campaign trail that he will be the “most radical,” or far-left, president in history, a fact that even a far-left Washington Post columnist recognises.

Ocasio-Cortez’s remarks praising Biden for promoting a radical left-wing agenda come as the administration struggles with a crisis on the southern border that many have blamed on Biden’s policies. The Mexican government claims Biden’s policies “are stoking illegal immigration and creating business for organised crime,” according to Reuters.

The Biden administration is reportedly preparing to raise the number of migrants released into the United States who were arrested illegally attempting to enter the country by up to 800 per cent, according to reports released late this week.

The move comes as Biden’s border crisis has worsened, with CNN reporting that US officials estimate they could encounter 2 million illegal migrants attempting to cross the southern border illegally this year. That is more people than Alaska, Vermont, and Wyoming put together.

However, the Republicans, especially those, whose states are facing turmoil due to Biden’s policies are gravely concerned. Rep. Vicente Gonzalez (D-TX) warned earlier this year that, “Well, my concern at this in the recent weeks in my district, migrants who made it across the border, who even pass the line of MPPs [Migrant Protection Protocols], who were 5,000 folks that have been waiting for two years across the border, made it across the Rio Grande Valley were processed and released. If that is the message that we send to Central America and around the world, I can assure you, it won’t be long before we have tens of thousands of people showing up to our border.”

“And it’ll be catastrophic for our party, for our country, for my region, for my district, in the middle of a pandemic, in an area where we’ve lost over 3,000 people in my small congressional district,” he continued. “So, I think we need to have a better plan in place. I think asylum seekers should be able to ask for asylum and be processed in their home country or a neighbouring country. And we shouldn’t have a policy in place that impulses people to make this 2,000-mile trek where cartels and human traffickers are enriching themselves.”

The Biden administration has squandered no chance to demonstrate its contempt for middle America and Republicans. It is almost as if they want to describe “healing America” by excluding those who voted Republican. Joe Biden campaigned on the idea of a “united” America. However, after becoming President of the United States, his policies, executive orders, and speeches have placed enormous strain on the country’s social fabric. Biden’s political decisions have been so influenced by the left agenda that many Democrats have felt betrayed. And Biden must be feeling good about his work because that is what being appreciated does to you.