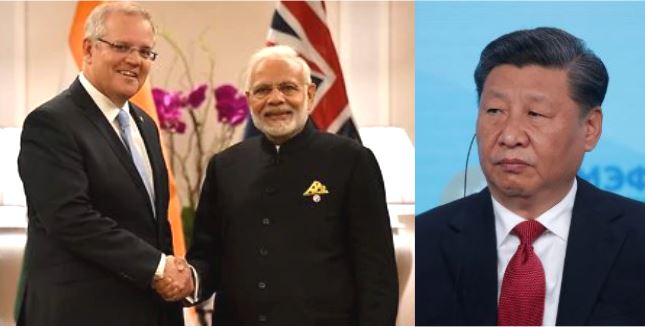 The Indo-Pacific is often perceived as a strategic hotspot ready to dictate world affairs, but there is a looming threat, threatening to destabilise the region- the People’s Republic of China. Over the past one year, the China threat has grown exponentially, as the paper dragon has turned more belligerent than ever. Beijing’s biggest foes- New Delhi and Canberra, are therefore chalking out a strategy to meet the threats posed by the Communist nation.

Strategic analysts wonder as to when and how will China get offensive and escalate matters into an armed conflict. But what top Generals and other military commanders in these two countries have started realising is that China is already engaged in what defence experts call “grey zone” warfare. Sydney Morning Herald has reported that Australia’s retired Major General Adam Findlay briefed Australian Special Forces soldiers about such warfare last year.

General Adam Findlay, the then Special Forces Commander, who still advises the Australian Defence Force, had reportedly given a candid and confidential briefing to the Special Forces which comprise the fiercest combatants in any military force.

The ex-Major General asked his troops and officers, “Who do you reckon the main [regional] threat is?”, before answering, “China”. The retired Major General went on to explain China’s “grey-zone” warfare strategy. He said, “They (Chinese) know that western democracies have peace, and then, when they cross a line, we get really angry. Then we start bombing people.”

General Findlay added, “China said, let’s be smarter. Let’s just play below the threshold, before it goes to war. Let’s achieve things strategically without having war. So, now we have a new dimension.”

Similarly, in February, India’s Chief of Army Staff, General MM Naravane too spoke about “grey-zone” warfare in reference to the ongoing military standoff between India and China. General Naravane did not directly mention China but he did say that as the adversaries expand the “contest to the grey zone”, there is a “dire” need for modern militaries to be as proficient in competition as hardcore “kinetics”.

“Kinetics” in military terminology is a reference to the use of lethal force in the form of traditional weaponry like artillery, tanks and fighter aircraft. But as General Findlay pointed out China has been using “political warfare” without going into kinetics.

Such warfare includes the use of intelligence operatives, Special Forces, cyber warfare, intelligence diplomacy, foreign interference, disinformation campaigns, quick mobilisation of troops and power protection, use of non-State actors, trade wars and other economic actions, covert and overt military raids or small-scale strikes and other tactics that fall just short of an actual war.

Till now, China was contesting in the “grey-zone” but now Australia and India are ready to hit back at China in the same dimension of warfare. Over the past one year, China has attempted political interference and propaganda campaigns inside Australia’s political system, as well as its University campuses. Beijing also tried to weaponise its trade ties with Australia.

On the other hand, India and China have been locked in a tense stand-off in Eastern Ladakh near the Line of Actual Control (LAC)- the de facto Sino-India border.

As for India, the armed forces of the country have already had a lot of experience in “grey-zone” warfare. In 2019, when General Naravane, then General Officer Commanding (GOC)-in Chief of India’s Eastern Command had warned that if China entered grey zone 100 times, we (India) did the same double that number of times.

The deployment of Special Forces could be perceived as a statement of intent regarding the operationalisation of the Armed Forces Special Operations Division (AFSOD) – India’s initiative to draw Special Forces, troops, from all three military wings.

Moreover, India has operated successfully in the “grey-zone” on its Western front for quite some time. In 2016 and 2019, Indian military forces carried out cross-border strikes against terror outfits in Pakistan-occupied territory without igniting an actual war. In future, the efficiency of such strikes can be improved with synergy in Special Forces, and technology infusion through the use of armed drones and advanced attack helicopters.

Ultimately, India and Australia will have to move towards civil-military fusion in order to meet the China challenge. The Indian Army Chief too said, “We need to shed the classical war and peace disposition and enhance cross governmental fusion in order to win aggressively in the competitive space.”

With “grey zone” warfare, we are moving into an era of long periods of military tensions and no power can afford to get caught napping. It might seem as if the intensity of warfare is dying down, but in reality, such warfare might lead to greater human and financial costs because there will be long periods of no war, no peace conflicts during which military forces will be engaged.

Even the US military academy has warned about China’s “grey zone” warfare. It stated, “National security leaders should look closely at what Chinese officials’ words and China’s military actions say about how the People’s Liberation Army might actually fight a war.”

China has been trying to change the art of warfare. But with Indian and Australian military commanders pre-empting the Chinese plan, the two countries are now ready to hit back at the Communist nation in the language it understands.