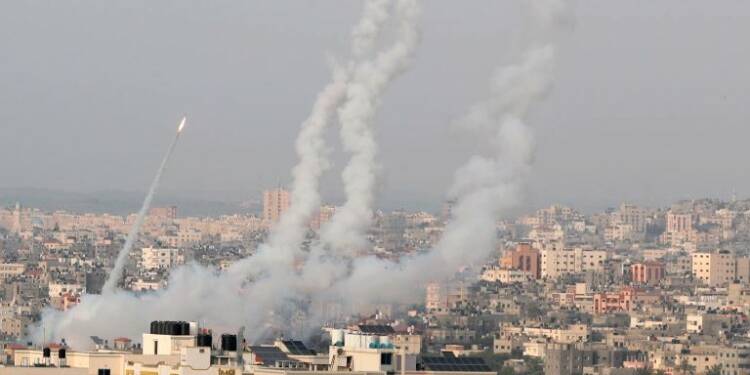 The media coverage of the Jerusalem clashes and subsequent rocket fire has disproportionately focused on Israel’s actions, whether it was the airstrikes or the threatened evictions in Sheikh Jarrah and clashes at the al-Aqsa Mosque. This is not unexpected, but it has also contributed to framing the current conflict as largely a result of Israel’s alleged violence, rather than a cycle set in motion in part by Hamas. The Iranian and Turkish newspapers, predictably, have the most anti-Israel news. Both Iran and Turkey back Hamas.

The state-run Anadolu Agency in Turkey has around a dozen reports on Israel, each of which is more anti-Israel than the last. One claims that Israel has killed 24 people, while another claims that Israel has detained Arab protesters in Jerusalem and allegations of “Israeli assaults on the al-Aqsa Mosque. Ankara has incited anti-Israeli protests in Turkey, despite the regime’s suppression of other protests, such as the latest May Day demonstrations.

Turkey uses the COVID-19 pandemic to silence any opponents, then promotes anti-Israel demonstrations, which are fuelled by pro-government media. Turkey has stated that it would “defend” Palestinians. Anadolu also claims that its journalists in Jerusalem were targeted.

Ankara has communicated with Jordan’s ruler, claiming that Israeli forces are “storming al-Aqsa.” This is a largely made-up lie. Anti-Israel critics use the phrase “storming al-Aqsa” to make it seem as if protecting the Temple Mount against aggressive demonstrators is “storming.” Nowhere else on the planet is securing a holy site referred to as “storming.”

According to Turkey’s Foreign Ministry, “many innocent people” have been killed in Gaza. The “brutal repression” of Palestinians in “al-Quds,” as Press TV refers to Jerusalem, has also been highlighted in Iranian newspapers. Al-Quds is also the Arabic and Islamic term for Jerusalem, but major media replacing the word with “Quds” reveals a political agenda that goes beyond terminology.

According to Press TV, the events unfolded as the Palestinian resistance launched Operation Al-Quds Sword when Israel killed 25 people in Gaza raids. This gives the impression that Hamas launched rockets at Jerusalem in revenge when the contrary occurred.

“Israel launches airstrikes after rockets fired from Gaza in day of escalation,” according to CNN. “Jerusalem tensions boil over with rocket fire, and at least 20 people have been killed in Gaza,” according to NBC. This effectively captures a more realistic view of what occurred.

According to the BBC, there have been “pleas for calm as violence escalates.” The Guardian, on the other hand, tried to highlight the “twenty-four dead in Gaza following the spread of Jerusalem violence.” The Palestinian rocket fire – which targets Jerusalem and fires about 200 rockets at Gazan communities – is highlighted in the majority of reports. The topic of the rocket fire was often pushed to the bottom of papers or made to appear as revenge for whatever Israel had done.

The rockets were launched on the anniversary of Israel’s 1967 Six-Day War conquest of Jerusalem’s Old City and eastern suburbs, according to NBC, “After Hamas set a deadline for Israel to evacuate its security forces from flash points in Jerusalem and free Palestinians detained in recent clashes, explosions and air raid sirens were heard in Jerusalem.”

“At least 24 civilians – including nine children – have been killed amid a new wave of Israeli airstrikes on Gaza, which continued throughout the night through Tuesday morning, according to the Palestinian health ministry,” the Independent said. Gaza health officials told The Independent that the youngest victim was ten years old. After the outbreak of violence in the West Bank, Gaza, and Jerusalem, more than 700 Palestinians have been wounded, including around the al-Aqsa Mosque compound.

Until the reader gets past the first few paragraphs of the article, it is unclear if Hamas has fired any rockets. According to the paper, Israel launched a “wave” of airstrikes, killing children, and then Hamas fired rockets. The report did note, however, that the UK had condemned the attack on Israel.

According to Fox News in the United States, “Gaza militants were killed as Israel hits Hamas.” This seemed to be one of the few headlines that named Hamas as the perpetrator of incitement and attacks against Israel. “Israel strikes Gaza after militants launch rocket attack,” CBS said. At the very least, the headline included a timeline of how this latest dispute had unfolded.

Many people have shared a video without the background of Israelis cheering at the Western Wall on Jerusalem Day as a fire rages near the al-Aqsa Mosque on social media. The video is framed in such a way that it seems that Israelis are celebrating al-Aqsa attacks when the background is vastly different. The rioting in several parts of Israel and the West Bank, as well as Hamas’s incitement, appear to have received little attention. The global media has painted the incident as one of the Israeli aggressions but in reality, Hamas launched rocket attacks on Israel.