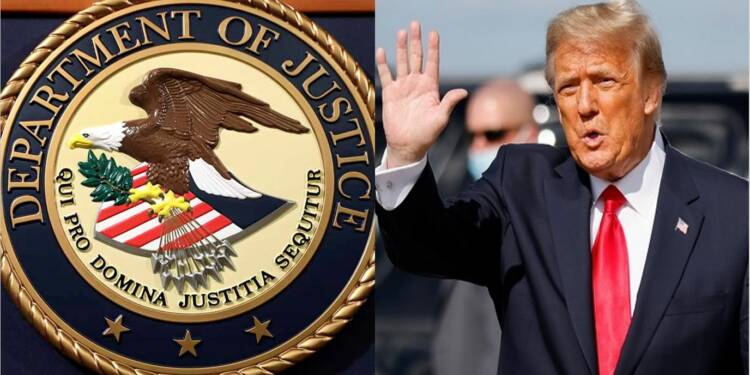 On Monday, the Justice Department filed an appeal of a federal court order requiring it to issue a 2019 memo in its entirety, which Attorney General Bill Barr used to exonerate then-President Donald Trump of obstruction of justice. The appeal was filed late Monday night, after the department made parts of the memo public, though the majority of it was heavily censored.

Officials from the Justice Department’s Office of Legal Counsel penned the memo, which discussed the detailed facts set out by special counsel Robert Mueller in his final report on Russia’s meddling in the 2016 US election and whether Trump attempted to impede justice during the inquiry.

Barr stated at the time that he cleared Trump of obstruction charges “after consulting with the Office of Legal Counsel and other Department lawyers,” but he did not make the memo public. Citizens for Responsibility and Ethics in Washington responded by filing a Freedom of Information Act lawsuit to obtain the memo.

On May 5, US District Judge Amy Berman Jackson ordered the memo to be published in its entirety, stating that the DOJ’s justification for keeping it under seal as a “deliberative document” was false. On Monday night, the Justice Department released a page and a half of the memo, with significant parts of the document analysing Trump’s behaviour as outlined in the Mueller report from a legal perspective still redacted.

Now: DOJ notifies the court that it will appeal a judge's order to release a March 2019 memo re: not prosecuting Trump for obstruction in the Russia probe. More to come shortly. pic.twitter.com/BiXXX7qNKQ

Mueller had failed to draw a verdict on the allegation that Trump obstructed justice, citing Justice Department guidelines against the prosecution of a sitting president.  However, OLC officials wrote in the newly published unredacted parts that Mueller’s stance “might be read to imply such an accusation, if the confidential report were released to the public. Therefore, we recommend that you examine the Report to determine whether prosecution would be appropriate” to resolve any potential legal ambiguity,” the memo said.

The recently released memo stated that there was insufficient evidence in the Mueller report to charge Trump with obstruction of justice, although the exact grounds on which they arrived at that conclusion were vague due to the fact that that section of the report was redacted.

Judge Jackson argued in her order for the DOJ memo to be released that Barr had wrongly asserted that he was acting on the document in not prosecuting Trump, when in fact he had already made the decision.

“The letter asserted that the Special Counsel ‘did not draw a conclusion – one way or the other – as to whether the examined conduct constituted obstruction,’ and it went on to announce the Attorney General’s own opinion that ‘the evidence developed during the Special Counsel’s investigation is not sufficient to establish that the President committed an obstruction-of-justice offence,'” Jackson wrote. However, the OLC’s memo “calls into question the accuracy of Attorney General Barr’s March 24 representation to Congress” and “raises serious questions about how the Department of Justice could make this series of representations to a court,” the ruling said.

In its Monday filing, the DOJ said that “its briefs [to the court] could have been clearer, and it deeply regrets the confusion that caused. But the government’s counsel and declarants did not intend to mislead the Court.”

The full unredacted memo is expected to shed fresh light on one of the most pressing issues surrounding Mueller’s investigation: why the special counsel failed to render a “standard prosecutorial decision” on whether Trump obstructed justice.

Barr told reporters that Mueller’s decision was not influenced by long-standing Justice Department guidelines that say a sitting president cannot be indicted. He said that in fact, Mueller’s determination – or lack thereof – was prompted by the inconclusive nature of the evidence.

After backstabbing its Five Eyes partners and prostrating before China, New Zealand senses a storm coming