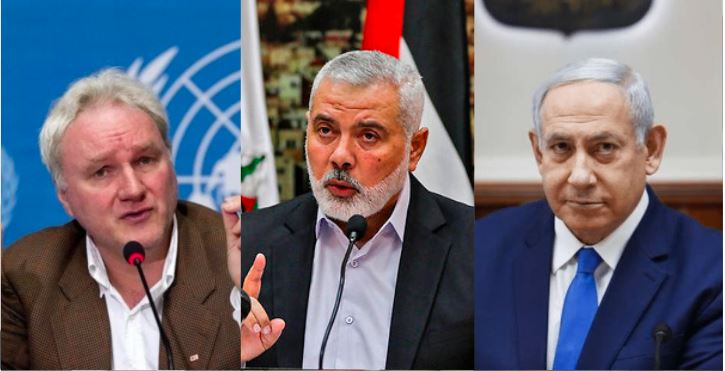 When Matthias Schmale, the Gaza Strip director of the UN Relief and Works Agency (UNRWA), told Channel 12 on Sunday that Israeli strikes during the recent Hamas-Israel conflicts were “precise” and “smart,” he was merely expressing the facts as he saw them.

Schmale was queried about the IDF’s claim that its military operations on terrorist targets were particularly precise in an interview with journalist Arad Nir. “I’m not a military expert, but I would not dispute that. I also have the impression that there is a huge sophistication in the way the Israeli military struck over the last 11 days, so that’s not my issue. I’ve had many colleagues describe to me that they feel that, in comparison with the 2014 war, this time the strikes felt much more vicious in terms of their impact. So yes, they didn’t hit – with some exceptions – civilian targets, but the viciousness, ferocity of the strikes was heavily felt,” he replied.

He stated that around 60 children had been killed in Gaza, with 19 of them attending a UNRWA school. “I think the precision was there, but there was unacceptable and unbearable loss of life on the civilian side,” Schmale stated.

Former IDF spokesman Peter Lerner, on the other side, praised Schmale for his “candid interview” and “for sharing your opinion that Israeli strikes were indeed precise, conducted with a huge sophistication.”

Thank you @matzschmale, @UNRWA for your candid interview w/ @arad_nir & for sharing your opinion that Israeli strikes were indeed precise, conducted with a huge sophistication, and huge ferociousness, but mostly not civilian targets. Indeed all loss of civilian life is tragic. https://t.co/E6lOvBwMUl

In response to Lerner’s tweet, Schmale stressed that “all loss of civilian life (on both sides) is not ‘tragic’ but unacceptable!”

However, it didn’t take long for Gazans to react angrily to Schmale’s words, accusing him of defending Israel and demanding that he be reprimanded and fired. Several Palestinian rights organisations accused Schmale of “indirectly complimenting the precision and sophistication of the Israeli Army, whereas Israel is regularly perpetrating war crimes and crimes against humanity against the Palestinian people,” according to a joint statement.

The words startled Hamas, which accused the UNRWA staffer of posing as a “military analyst for the occupation army” in a tweet. Hamas said in a statement that the comments were “a complete distortion in favor of the Zionists, including an attempt to exonerate the occupation of the murder of 254 Palestinians, more than 40% of them children, women and the elderly.”

For the record, the Hamas-run Gaza Health Ministry, which does not distinguish between terrorists and civilians, claims that the Israeli attacks killed at least 243 Palestinians, including 66 minors. The IDF, on the other hand, claimed to have killed 200 terrorists and that some of the civilian deaths were caused by Hamas missiles that missed their target and landed in the Strip.

Opponents of Israel’s conduct during Operation Guardian of the Walls claim that the IDF deliberately targeted people, although Israeli officials have consistently said that the IDF did all possible to avoid civilian losses, including alerting civilians ahead of airstrikes.

Israeli military officials confirmed that the air campaign’s collateral damage resulted in civilian casualties. The IDF stated a missile hit on an underground bunker in the Shati refugee camp mistakenly caused the collapse of two homes, killing ten people, including eight children, in one of the deadliest cases.

According to the IDF, such deaths were the tragic result of Hamas’ policy of operating in densely populated areas and utilising civilians as human shields. Here’s the essence of the problem: The IDF strives for precision, focusing primarily on terrorists and military installations. Hamas, on the other hand, shoots rockets against Israel without discrimination in the hopes of killing as many Israelis as possible.

Schmale ultimately had to offer an apology to the Palestinians. On Tuesday morning, he said, “Recent remarks I made on Israeli TV have offended & hurt those who had family members & friends killed & injured during the war that has just ended,” he tweeted, “There is no justification whatsoever for killing civilians. Any civilian killed is one too many. It is simply unbearable that so many innocent people have paid with their lives.”

The absurdity of Hamas’ grasp on Gazans and UNRWA is demonstrated by this entire incident. It is terrible that Schmale felt compelled to apologise for open words that spoke the truth after being terrorised on social media.

George Floyd was a hoodlum who was killed and got famous. What legacy is the BLM talking about?