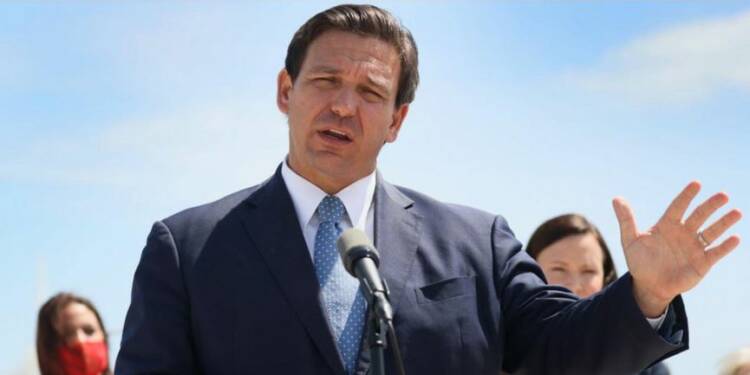 The “Fairness in Women’s Sports Act” specifies that males are barred from participating in women’s sports from middle school through college, including intramurals and club teams, based on the biological sex recorded on a student’s birth certificate. Republicans have praised the bill for “protecting the integrity” of girls’ sports. More than 20 other Republican-leaning states have joined Florida in pushing similar measures.

On Tuesday, the Republican governor made a show of signing the bill, citing a well-known example of transgender high school sprinters from Connecticut outperforming their peers on the track. “In Florida, girls are going to play girls sports and boys are going to play boys sports,” DeSantis said, speaking at a private school in Jacksonville.

On stage, DeSantis, backed by Trinity Christian Academy student-athletes, streamed a video of transgender athlete Terry Miller winning a race in 2019, before introducing one of her competitors, Selina Soule, to speak to the crowd. Soule, a Connecticut high school track and field athlete who has been vocal in her opposition to transgender athletes competing, told the crowd that losing to transgender females was “frustrating” and “demoralising.”

Ahead of his re-election and likely presidential run in 2024, DeSantis has signed into law a slew of conservative-leaning bills from the GOP-led Legislature, including measures cracking down on Big Tech, lifting Covid regulations, and tightening voting regulations.

Democrats, for the most part, oppose the policy, stating that it is unjustified in the state, that it promotes transphobia, and that it discriminates against transgender kids. At least one group has threatened to sue the state of Florida over the bill.

Since 2013-14, 11 transgender athletes have requested for participation in sports through the Florida High School Athletic Association’s participation policy, which permits kids to petition to play sports regardless of their birth certificate gender. Democrats tried to use this rule as an example of why the law in Florida was unneeded. The sole instance of transgender athletes in the state that lawmakers could bring up during the discussion was bowling.

Democrats were eager to point out on Tuesday that DeSantis signed the bill on the first day of LGBTQ Pride Month, a move Democratic Agriculture Commissioner and potential 2022 gubernatorial candidate Nikki Fried called “particularly cruel.”

The Human Rights Campaign announced shortly after DeSantis signed the bill that it would fight it in court, arguing that it is “driven by discriminatory purpose and not supported by truth.” A similar law recently passed by West Virginia lawmakers is being challenged by the American Civil Liberties Union.

President Joe Biden’s policy has practically crushed feminist initiatives to improve equality and has met with widespread opposition, implying that the President made such measures that have stretched the societal fabric solely to advance his left-leaning political goal. This also demonstrates the progressive democrats’ grip on the present administration, which is left-leaning.

By signing the law to prevent Biden’s executive order, DeSantis has taken a bold stand against the left-leaning agenda which echo through the White House. Moreover, his resistance to protect the state of Florida is commendable.