Trump destroys Biden’s 130 days of work in just one interview, and Democrats won’t have any answer 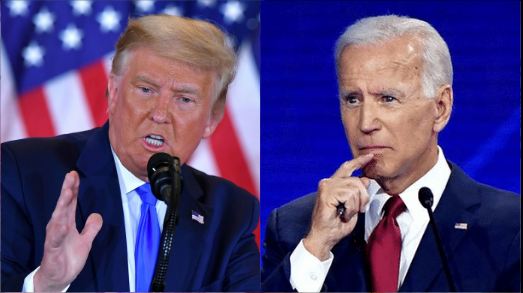 Trump delivered his America First, MAGA views in a wide-ranging phone interview, ripping Fox News and lamenting the Democrats’ turn against Israel, a softened approach to China that allows it to “get away with murder,” defunding police movements that lead to massive crime increases in the United States, and the destruction of women’s rights.

Trump claimed that his successor has to do “nothing” to avoid difficulties at the border, with China, the Middle East, and North Korea, and that President Joe Biden’s actions are “destroying our country.” “All he had to do is nothing,” Trump told Newsmax’s Dick Morris. “We won’t have a country; they’re destroying our country,” he added.

But, as Trump pointed out, the trade agreements with the United States, Mexico, and Canada (USMCA) and phase one with China have been so effective that even Biden has yet to sabotage them by unravelling them.

“If he would have done nothing, we would have had right now the strongest border in history,” Trump told Morris, echoing comments made in an exclusive sit-down interview Tuesday with “Cortes & Pellegrino.”

Biden has been chastised for causing a migrant crisis at the border and quite rightly so. Resuming catch-and-release of illegal border crossings, suspending the Trump administration’s asylum seeker policy, and embracing illegal immigration Biden has stirred up a border crisis of unprecedented levels  just to advance his left leaning agenda and keep the progressive democrats content.

“I had everything worked out with the other countries, whether it’s Guatamala, Honduras, El Salvador, Mexico,” Trump said. “And even Mexico, stay in Mexico. In other words, these people ought to stay in Mexico, and they couldn’t get into our country. “And he ended that. It’s just crazy what they did.”

Trump added “the question is do they do it out of incompetence, which I happen to think, or they do it because they really believe open borders are good for this country? Which they are not.” “We had the strongest (border) in the history of our country,” Trump said. “Very few people (crossing). Drugs were way down. Human trafficking was almost stopped. “

“We did things that were amazing, and you take a look at what’s happening now. And let me tell you: They’re letting people from prisons. They’re opening their prisons. Their prisoners are coming in, their murderers, their drug addicts, and drug dealers, by the way. “And the human traffickers are coming in. They’re letting them in. They want them in. They don’t want them in their country, so they’re saying, ‘send them to the USA.’ “And we’re accepting them, because they’ve opened up the borders, Dick.”

It’s not just the US border that Biden has “destroyed,” according to Trump. Renewing “hostility” with North Korea has resulted from his government’s approach to resolve a severe nuclear danger left over from the Obama administration.

According to Trump, China and anti-Semitic groups have grown more powerful in the post-Trump era. “I think what’s happened to Israel is one of the great injustices,” he said. “If you look back 10 or 12 years ago, Israel was so protected by Congress. Congress loved Israel. “Now, especially if you looked at the House, the House doesn’t like Israel. The House is protective of anything other than Israel.”

By advocating for transgender participation in female athletics, the Biden administration is conducting an attack on women’s equity, which is a complete reversal of a stated purpose. “This is insane and it’s going to destroy women’s sports,” Trump said. Who’s going to – how do you compete?  “It’s so ridiculous. I can’t even believe we’ve got to have a conversation about it, actually.”

The major point of note here is that former President is correct in his criticism of the Biden administration. Since day one of his tenure, Joe Biden has reversed numerous policies and and has critically attacked and destabilized the foreign policy of the United States. Moreover, by opening the borders at the time of a Pandemic can be clearly seen as a decision which lacks proper deliberation especially now that the policy reversal has resulted in a major border crisis.

Moreover, the policy which has effectively killed the feminists efforts to progress equality has also met with a lot of resistance, which ultimately says that the President made such decisions which has strained the societal fabric only for a single motive; to advance his left leaning political agenda. This also displays the hold the left leaning progressive democrats have over the current administration.

As is the case with China, Biden has been soft on Chinese belligerence, whether it be South China Sea, Taiwan or even Chinese actions in the US. By allowing Chinese corporations such as Xiaomi and doing away with the State department website page which deemed the Chinese Communist Party as a threat, Biden has allowed the CCP to take precedence and has bowed down effectively to the party’s reign and actions.

Moreover, with Israel, Biden’s changed stance had been on display since he assumed office. His hesitancy to communicate with Israel, which is the United State’s most major ally in the middle east, emboldened anti-Israeli sentiments. Besides, he resumed the US funding to Palestine, further lighting up anti-Israeli sentiments in the region which when deduced to the bare minimum can be seen as one of the major reasons which led to the latest and deadly confrontation between Israel and Hamas.