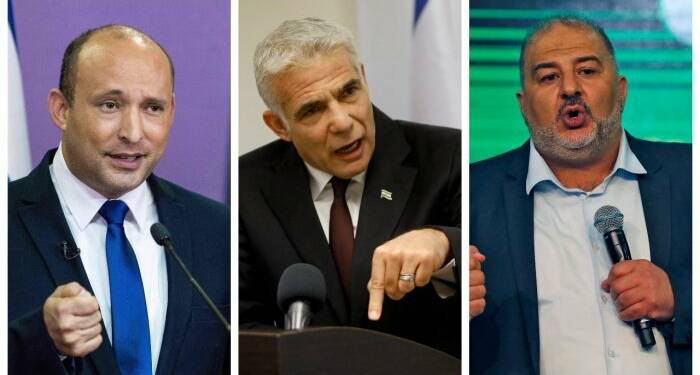 Israel’s opposition parties with polar opposite interests and ideologies banded together and barely signed an agreement on Wednesday night. This is a big shift in the political calculus of the country as the coalition will unseat Benjamin Netanyahu for the first time in 12 years. While there are many concerns regarding how long this coalition of polar opposites will last, the country faces a very dangerous possibility of ending up following a pro-Palestine policy.

The coalition includes an Islamist party and its leader Mansour Abbas, who is being criticised for joining hands with the right-wing Jewish parties in the backdrop of the recent conflict with Hamas. And realising this criticism as well as his importance in the coalition, he is sure to ask for pro-Palestinian decisions and if they are not met, it would mean the end of the ‘Change government’. Thus, the new coalition government will have to either be pro-Palestine or be dead.

In what would be a first in Israel, a governing coalition would include an Islamist party elected by the members of Israel’s 21 per cent Arab minority, who are Palestinian by culture and heritage and Israeli by citizenship. However, as per news reports, its leader Mansour Abbas has been criticized in the West Bank and Gaza for siding with what they see as the enemy. Badri Karam, a resident of Gaza said, “He is a traitor. What will he do when they ask him to vote on launching a new war on Gaza?”

Mansour Abbas is aware of these criticisms and he even understands the privileged position he holds to keep the coalition together. In his initial remarks, he said the coalition agreement would bring more than $16 billion to improve infrastructure and combat violent crime in Arab towns. However, this is just about the domestic policies and he did not mention his view for the foreign and neighbourhood policy that the new coalition government would follow, which is where the devil lies.

The coalition consists of eight parties from across the political spectrum with the shared goal of toppling Netanyahu after a record-setting 12 years in power. The alliance includes hardliners previously allied with Netanyahu, as well as center-left parties and the Arab faction headed by Mansour Abbas. However, as they succeed in their goal of toppling the government of Benjamin Netanyahu, the new government will need to formulate a new policy vis a vis Palestine and this is where the coalition partners will be required to pay heed to the demands of their fellow companions from the Islamist party.

Mansour Abbas will make sure that the new government follows pro-Palestinian foreign and neighbourhood policy. He will hold the coalition government on his wishes and whim when it comes to the West Bank settlements as well as making concessions to the Palestinians and even Hamas at the expense of Israel. This is because the arithmetic of the coalition provides for only two options, either the government follows a pro-Palestinian policy and gets the support of the Islamist party or loses their support and Israel heads for another round of elections.

Read More: Fear of Netanyahu unites power greedy parties and Palestinian agenda peddlers: A disaster for the people of Israel

This is among the many reasons why Benjamin Netanyahu has been lashing out at the coalition members. Netanyahu lashed out at his foes on Thursday, signalling that he will continue to exert pressure on former ideological allies who joined the Lapid-Bennett coalition. He wrote on Twitter, “All members of Knesset who were elected with right-wing votes need to oppose this dangerous leftist government.”

The ideological right in Israel is about to commit hara-kiri by extending support to the coalition just to see Netanyahu leave office. Just for the sake of gaining power, the coalition is vomiting a blunder and cornering itself. Going ahead, it will have only two options, to either follow a pro-Palestine policy or self-combust itself.