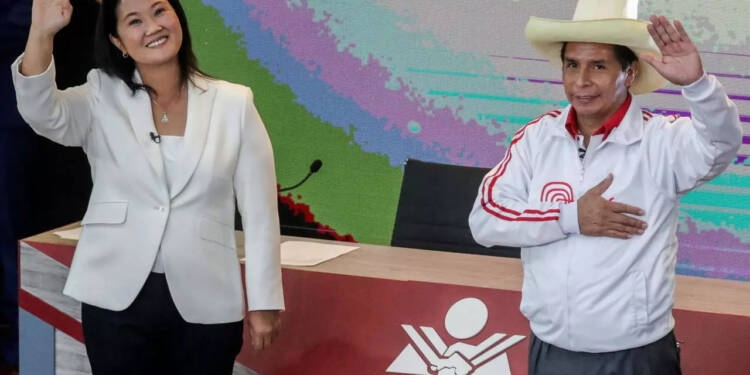 The presidential election is hanging on a knife-edge in Peru. Two candidates are vying for the top position in the Peruvian government. In one corner is the daughter of Jailed Peruvian autocrat, Keiko Fujimori, who is battling to form a right-wing government and, in the opposite corner, is the socialist Candidate Pedro Castillo, a teacher by profession.

Early on Monday, conservative Keiko Fujimori held a razor-thin lead in Peru’s presidential election, but socialist Castillo Pedro was closing the distance, setting up a possible photo finish. But whoever forms the government in Peru, what is becoming very clear is that Chinese firms in Beijing are going to lose big in the South American nation.

Pedro Castillo, the socialist candidate who is favoured to win the run-off vote on Sunday, has proposed higher royalties on mineral sales and has floated a plan to renegotiate long-standing tax accords made by previous governments. He has proposed more than tripling the state’s share of mining revenues to 70% and utilising the proceeds to improve healthcare and education while also lowering economic inequality.

If Castillo were to win the election and carry out his plan, Chinese mining companies such as MMG Ltd (1208.HK) and Aluminium Corp of China (Chinalco) (601600.SS) would be the hardest hurt, according to a Reuters analysis of official data.

Meanwhile, if a staunch right-wing government is formed under Keiko Fujimori, the consequences for the Chinese companies could be a lot steeper. Fujimori is fighting for capitalism and market forces and thus would open the industrial sector to more competition thereby increasing the pressure over Chinese companies.

Over the years, Chinese companies have had a monopolistic hold over Peru’s mining industry which has one of the world’s largest copper reserves. Chinese mining companies have established themselves as major players in Peru’s mining industry. Peruvian copper is used for everything from construction to the creation of electric automobiles, and the Asian country is by far the greatest client.

With the economic recovery in China already under duress due to a trade ban on Australian goods, problems in Peru would not bode well for the CCP. Besides, the CCP is also trying to fight fires domestically due to the demography crisis which will severely impact the Chinese economy.

Thus, even though the Peruvian presidential election could go either way between a socialist or a capitalist government, Chinese companies will be the biggest losers.

The clever games of Egypt: Egypt’s entry into Gaza has put Hamas in an extremely uncomfortable position