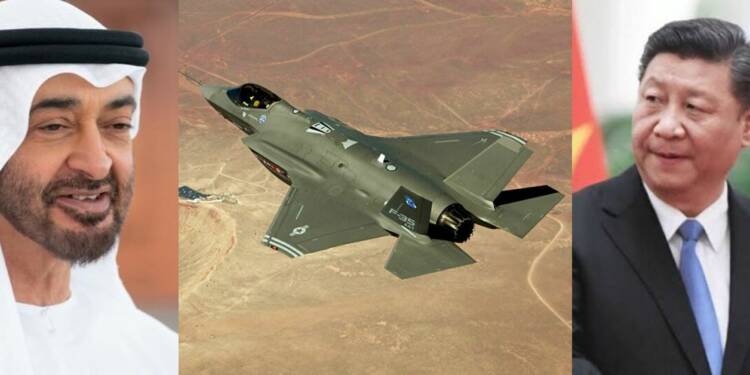 There is some really bad news coming China’s way, as the Middle East seems poised to kick the paper Dragon out of the region. Two particular developments are bound to hurt China badly- one, the UAE has got elected to the UN Security Council as a non-permanent member. And two, US President Joe Biden is asking the UAE to turn completely anti-China if it wants to save the F-35 fighter aircrafts deal.

Now that we do know that Biden is following the broader Trump policy in the Middle East, the UAE’s entry into the UNSC comes as very good news for Israel and the US, though it hurts China’s regional ambitions. Meanwhile, the Biden administration has asked the UAE to drop China’s Huawei equipment from its networks over the next four years or run the risk of termination of its fifth-generation F-35 fighter aircraft deal with the US.

The fact remains that the UAE will now feel compelled to dump China. The F-35 fighter aircraft and American drones carry a lot of value for the UAE. The F-35 deal is believed to be one of the major reasons behind Abu Dhabi’s decision to sign the Abraham Accord and normalise relations with Israel.

So, you can expect that the UAE won’t think twice before giving up Huawei for the American defence equipment. And since, China is really psychotic about Huawei, dropping the telecom giant would be tantamount to giving up China itself.

As for the US, it has officially made a point- Washington is going to exclude China in the Middle East. Thus, has significant implications for a country like the UAE that wanted to maintain autonomy in its foreign policy between China and the US. But with the Biden administration asking Abu Dhabi to pick a side, the sense of such autonomy is getting eroded.

Also, it is that much easier for the UAE to dump China now. Beijing’s “vaccine diplomacy” in the UAE and Bahrain has turned out to be a major PR disaster. Firstly, Chinese vaccines are not proving to be effective at all. And then, Beijing is showing the gumption and temerity to suggest that the Gulf countries take a third dose of the Chinese vaccine. Chinese President Xi Jinping is testing UAE’s patience at a very critical time.

The UAE and Bahrain, on their part, are replacing China’s Sinopharm and making Pfizer/BioNTech shot available to their people. This is a sign of the direction in which the UAE is moving.

As American vaccines enter the Middle East, the UAE is being effectively made to turn anti-China. And if China is facing some serious setbacks in the Gulf region, then it is truly a pleasant development for Israel. The Jewish nation has only recently realized that China is not their friend.

For a long time, Israel wanted to maintain autonomy in its international relations and sustain business ties with China, despite being a US ally. It used to defend Chinese investments like the one in Haifa port. But during the Gaza war, the Chinese State media went full-blown antisemitic almost at the level of Iran.

The Chinese government too had no qualms in using pro-Palestine propaganda, with the object of harming the US and Israel. Ultimately, the Israeli embassy in China had to rebuke Beijing-backed antisemitism.

It is clear that China has prioritized Iran’s interests over its relationship with Israel. So, now the UAE and Israel will join hands to kick China out of the region. In this context, the UAE is going to play a big role entering as a non-permanent UNSC member. The presence of the UAE strengthens Israel and weakens China at the powerful body.

The UAE is getting elevated to a non-permanent position at the UNSC at a time when the Gulf nation is undergoing unprecedented transformation. Diplomatically, Abu Dhabi has been warming up to the free world and strengthening ties with democratic countries. The UAE President Khalifa bin Zayed Al Nahyan is liberalising UAE and moving it in a progressive direction. He is making the UAE remarkably different from Islamist regimes.

The presence of the UAE in the UNSC will therefore also spell bad news for Islamist-authoritarian regimes like Turkey. And given its close ties with Israel and the US, Abu Dhabi can help keep a check on what Turkey might be up to in sensitive regions like the Eastern Mediterranean, Syria, and Libya.

The UAE is quickly shifting towards the US and Israel, and China is going to get dumped in the process. This is good news for the free world especially in the context of Abu Dhabi’s non-permanent membership in the UNSC, whereas China and other such authoritarian bullies stand to lose big.