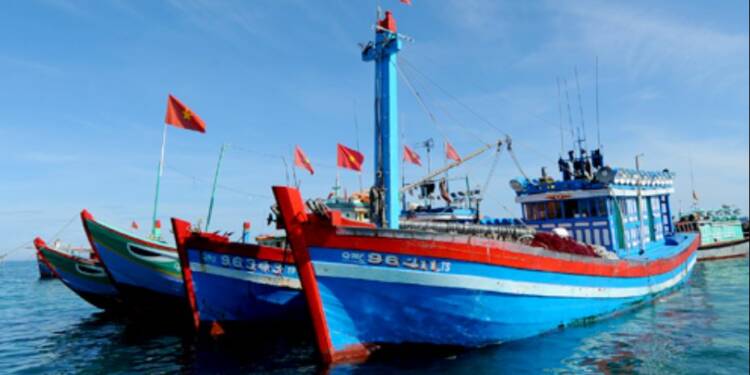 (PC: FRESH NEWS / This image has been used for representational purpose only)

On June 9, a militia squadron was founded in Vietnam’s southern province of Kien Giang, which borders Cambodia and is the largest location in the Mekong Delta. Reconnaissance and marine exploitation are the duties of the militia squadrons.

In the South China Sea, China enjoys harassing others. It terrorises ASEAN neighbours who disagree with Beijing’s claims in the disputed area. Chinese fishing boats are frequently used as maritime militias. China utilises so-called fishing vessels to harass other countries’ fishermen all throughout the Western Pacific, particularly the contentious South China Sea. China’s terror rule is about to come to an end, as Vietnam has built up its own fishing militia and China has been left clueless.

The squadron is the first of its sort in the Mekong Delta, and the second after the first was established in April in Ba Ria-Vung Tau, in the southern region of Vietnam. The southwestern waterways were considered crucial for both national security and economic growth by Vietnam. The standing militia squadron is tasked with two missions: sovereignty defence and economic development, and it is managed by the Kien Giang Military High Command.

Patrolling, reconnaissance, and protecting sovereignty over the sea and islands, as well as maritime exploitation, are among its responsibilities. One of the responsibilities of the marine militia is to educate people about the laws governing national defence and security, as well as fishing and fisheries protection. At the same time, the squadron patrols and performs reconnaissance in Kien Giang’s seas in order to carry out sovereignty protection tasks.

In late 2019, a plan to develop maritime militias was announced, with the formation of such a force in 14 coastal regions. Maritime militia actions, according to the Central Military Commission, are critical for the security of territorial seas in the current situation.

One of the primary points achieved in Vietnam’s 2019 Defense White Paper is the militia and self-defense forces.  In it, the country reiterates its motto of “defending the Nation from afar,” which entails exhausting all non-military options to prevent the homeland from being harmed in the first place. The purpose of the “all-people” defence concept is to employ these other capacities to “prevent and push back the risks of war,” while the armed forces remain “at the core” of the system.

It also emphasises the “four no’s” policy, which includes no military alliances, no affiliation with one country to counteract another, no foreign military base on Vietnamese soil to act against other countries, and no use of force or threats of force in international relations.

For a long time, Vietnam has been preparing to mobilise a powerful naval militia. The Southeast Asian nation passed a law in 2009 allowing its marine militia to conduct military responsibilities such as patrols and surveillance at sea. Vietnam has also given the maritime militia the authority to confront and evict foreign vessels that enter Vietnamese reefs and islands.

In the context of China’s ambitions to stretch its muscles in the South China Sea region, the marine militia is becoming increasingly relevant. The Chinese People’s Liberation Army Navy (PLAN) and Chinese maritime militia have been battling for control of disputed South China Sea features for years. Beijing’s Xi Jinping administration aspires to rule over the entire area.

Vietnam is obviously becoming a source of concern for China. Then there’s the horrible humiliation Beijing suffered at the hands of Hanoi during the Sino-Vietnamese conflict in 1979. China is concerned that if tensions in the South China Sea develop, it would be subjected to another humiliation at the hands of Vietnam. It also has significant diplomatic and economic clout. It has been stealing Japanese firms and other corporate entities as they leave China in quest of new opportunities. As a result, Vietnam has far too many weapons to threaten China, the most powerful of which is, of course, its maritime militia.