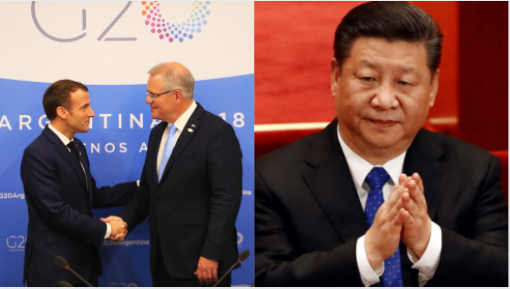 Australia and China are fighting a clear diplomatic battle, which clearly shows signs of turning kinetic in the foreseeable future. But there is an imbalance. Australia being a peace-loving democratic nation did not really develop a huge military force, whereas China- an expansionist nation with a totalitarian regime has amassed a huge military force. Today, China is a bigger military than Australia, both in terms of men and machines.

China, being the bully that it is, would have no qualms in using its military firepower against Australia. However, Australia now has France by its side, which is tilting the balance in Australia’s favour. French President Emmanuel Macron has subscribed unflinching support for Australia, which is bound to bring along cutting-edge French defence technology.

Macron added, “You are at the forefront of the tensions that exist in the (Indo-Pacific) region, of the threats, and sometimes of the intimidation. I want to reiterate here how much we stand by your side.”

The French President also said, “I would like to reiterate how committed France remains to defending the balance in the Indo-Pacific region and how much we consider the partnership we have with Australia to be at the heart of this Indo-Pacific strategy.”

The French support to Australia is already tilting the balance of power in Canberra’s favour when it comes to escalating Sino-Australian tensions.

Australia has been trying to modernise its Navy. Morrison wants to equip his country’s Navy with submarines and upgraded cruise missiles. Canberra needs to upgrade its Navy quickly because the clock is ticking and China’s increasing belligerence leaves a very short window of opportunity that Australia cannot afford to miss.

But some problems have been coming up. Delays and cost overruns are a huge problem in the Scott Morrison government’s deal with the French Naval Group SA to construct a fleet of submarines. Experts are worried if the delivery of 12 attack submarines by the Naval Group SA would be pushed too far into the future, Australia might be left exposed in the Indo-Pacific at a critical time.

But now Macron is coming to the rescue. Australian PM has had “candid” discussions with Macron over delays and cost overruns in the delivery of a new fleet of submarines. Morrison told reporters in Paris that Macron has had a direct role “in ensuring that we’ve seen a much-improved position come forward from Naval over the last six months.”

Morrison added, “We are coming up to important gates in that contract and there have been issues that we have had to address.”

The thing is when Macron gets involved in the Indo-Pacific, he tends to bolster the standing of Australia. And presently, he has promised unambiguous support to Canberra.

In fact, France is already looking to form an axis of sorts with India and Australia, as a part of its Indo-Pacific strategy to contain China. Paris has established interests in the Indo-Pacific like its overseas territory of New Caledonia located near Australia in Oceania. China has been looking to fuel anti-France sentiments and therefore, Macron vouched for a “Paris-Delhi-Canberra axis” in 2018 itself.

France is a powerful military force and a trusted friend of the free world powers in the Indo-Pacific. So, the moment it gets involved in the region, Australia gets emboldened to take on China.