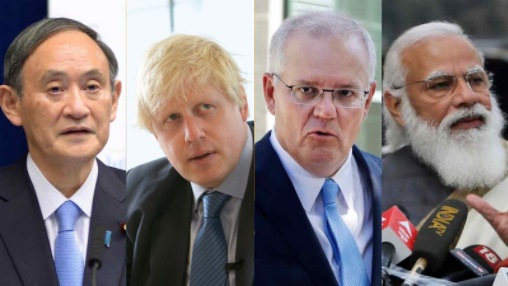 Britain has managed to make a big gain in the Indo-Pacific, and if things move in the same direction, the UK might as well succeed in creating a parallel anti-China Quad grouping in the region. Britain’s Indo-Pacific ambitions are based on closer ties with India, Japan and Australia. And a closer relationship with these countries, which already form an informal strategic forum with the US called Quad, is ramping up British influence in the region.

The UK has thus beaten the EU in its race to a trade deal with Australia. There are cultural similarities between the UK and Australia, with the latter being a part of the Commonwealth group of nations. Also, the Boris Johnson government in the UK and the Scott Morrison government in Australia share similar political ideology, which must have helped the two sides in their negotiations.

Boris has been vindicated in his ongoing race with EU leaders to secure trade deals. Now, the EU and the UK have another big power to race for- India.

A trade deal with India is important for both the EU and the UK. Britain already has deals with Japan, the US and Australia. If it manages to woo India, London will feel secure about its interests in the Indo-Pacific.

In fact, the UK is already leading the race to a Free Trade Agreement (FTA) with India. The two sides have had successful trade talks and they are close to finalising a deal. EU, on the other hand, remains far behind the UK. Last year, India’s External Affairs Minister Dr S. Jaishankar even suggested that the Indo-EU FTA talks have been stuck due to the EU’s reluctance.

So, Boris Johnson wasted absolutely no time in kickstarting intense trade deal negotiations with India, Japan and Australia, after leaving the European Union. The trade negotiations are in line with the larger British ambition of shifting a large chunk of its trade towards the Indo-Pacific region, in a post-Brexit world.

However, if Britain really wants to become an Indo-Pacific power, it will have to check Chinese belligerence in the region. So, it needs to ally with countries that are strongly and unambiguously anti-China in their policies. So, don’t be surprised if Boris chose Japan, India and Australia for post-Brexit trade negotiations.

As these countries, which openly advocate strategies to control Chinese hegemony, the UK itself is becoming more and more anti-China. A report about British military planners formulating plans for the HMS Queen Elizabeth carrier in the Pacific as a part of an international alliance to confront Beijing had appeared last October itself.

In February this year, Japanese and British Foreign and Defence Ministers also discussed ways of ensuring a Free and Open Indo-Pacific (FOIP), in an apparent reference to Chinese belligerence in the region.

Even during the recent G7 summit held in Cornwall, UK, Boris took a dig at Chinese authoritarianism. He signed a new Atlantic Charter with US President Joe Biden that doesn’t name China but involves an agreement to cooperate in areas like human rights, freedom of navigation and lawful use of the seas, apart from a commitment to secure open and free trade between nations. The content of the Charter is quite clearly directed against Beijing.

On Tuesday, Morrison and Boris Johnson held a joint press conference after announcing the historic trade deal. Johnson took the opportunity to come down heavily on China.

Read More: Indonesia is on a massive defence purchase spree to challenge the hegemony of China in the South China Sea

The British PM said, “If you ask me what do I find difficult about the way China behaves, you know, it’s very obvious. And it was clear at the G7, clear at NATO yesterday. I think people are worried about what’s happening to the Uighurs, they’re worried about the general repressions of liberties in Hong Kong, and some of the ways China behaves in its region, and it actually behaves particularly towards Australia.”

He added, “So we stand shoulder to shoulder with our friends.” Boris also said, “That’s why we’re sending a carrier strike group your way,” in a reference to the seven-month voyage of HMS Queen Elizabeth which set sail from the UK in May for the South China Sea.

The UK understands that it will have to collaborate with India, Japan and Australia in the Indo-Pacific and Boris is doing exactly that with a visible attempt to set up a parallel anti-China Quad grouping.