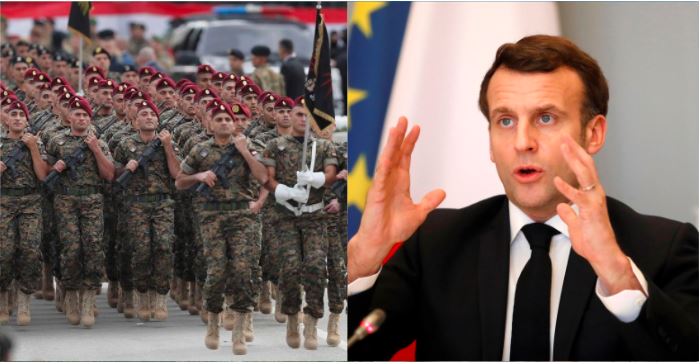 Remember, how a massive, earth-shattering blast in the Lebanese capital of Beirut triggered a political upheaval in the Middle Eastern country last year? French President Emmanuel Macron had then visited Lebanon, a former French colony, supposedly in order to assure French support to the country which has been reeling under several years of political elitism and misgovernance by a Hezbollah-backed political regime.

Now, the Macron administration is seemingly pushing for a military coup in Lebanon. And while phrases like a military coup or regime change might sound strong, Lebanese military rule is actually a better option than an Iran-backed Hezbollah regime.

Presently, all countries are rendering aid to Lebanon, which has been suffering in face of a prolonged economic crisis. But simply put, France is the biggest of all donors for Lebanon. And the Macron administration has made it a point to strengthen the Lebanese military.

A recent French Defence Ministry statement read, “Even if numerous countries have already provided significant bilateral aid, the gravity of the Lebanese crisis calls for increased commitment and coordination from everyone,” to help the Lebanese Armed Forces (LAF).

The French Defence Ministry also stated  that the “LAF remain an essential pillar of the Lebanese state,” and  “play a key role in maintaining security throughout the country.” So, this brings us to the big question – is France is planning a military coup in Lebanon?

Well, present signs do indicate that France wants a strong military establishment in Lebanon. And truth be told, the LAF too doesn’t mind getting some French support. Last month, Reuters claimed that according to sources, Lebanon’s Army chief Joseph Aoun warned France about how an economic crisis in Lebanon had put the country’s military on the verge of a collapse.

On the other hand, sources also said that Paris offered emergency food and medical aid for Lebanese troops in hope of preserving law and order.

For France, preserving stability in Lebanon is crucial. After all, Lebanon remains a country with mixed demography. Lebanon’s estimated Christian population stands at 40 per cent Christian, while the rest of the population is almost equally divided between Sunni and Shia Muslims.

Lebanon, therefore, represents more of a European styled democracy, partly due to its mixed demography and partly due to its status as a former French colony. Even today, Lebanon is seen as the most liberal Arab State. And Macron administration in France clearly believes that strengthening the Lebanese military is the only means of preserving order in the Middle Eastern country.

Yet, Hezbollah remains a challenge in France’s vision of a stable and prosperous Lebanon. Hezbollah remains politically influential in the country, despite all the criticism that the Iran-backed fundamentalist Shia group faced after the Beirut blast last year.

After the massive explosion in Beirut shocked Lebanon last year, Hezbollah started losing support despite a considerable Shia population in the country. All the explosions and storage of weapons targeted against Israel does not make much sense to an average Lebanese. Hezbollah is unpopular in Lebanon because it subjects people to a lack of safety and is generally viewed as representing the wrong side.

Yet, Hezbollah hasn’t been kicked out of the Middle Eastern country. Saad Hariri was renamed as Lebanon’s Prime Minister last year, and even the Iran-backed Hezbollah party did not vote for Hariri, it was being seen as sympathetic to him. This wasn’t an outcome, which an increasingly active Macron would have desired in Lebanon.

For the Macron administration, closer ties with the Lebanese military is a big opportunity to sideline Iran-backed Hezbollah. Lebanon has been unstable for quite some time. So, now it could be looking at either a coup or at least strengthening of Lebanese military with French support. In any case, Hezbollah will lose much of the influence that it exercises in the country and the France-backed military establishment could exercise much more control.