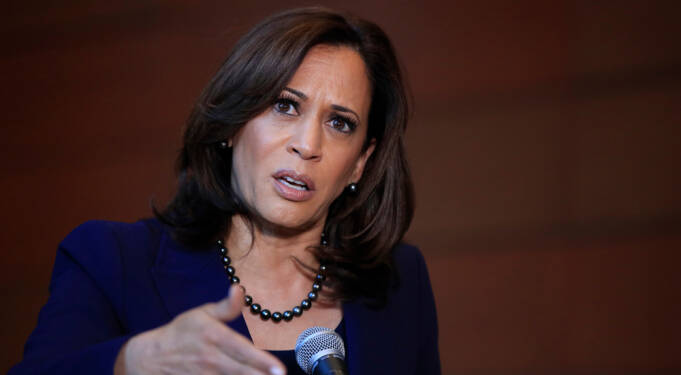 President Joe Biden had given his deputy – Vice President Kamala Harris the responsibility of leading his administration’s push for a brazen liberalisation of the country’s voting system, giving the franchise to just about anybody. The Democrats’ push for an overhaul of America’s voting and the electoral system comes amid a concerted push by Republican states to make the election process more authentic and ‘American’. Republicans want to change electoral leniency in order to ensure only Americans take part in the country’s elections.

In their endeavour to get more and more people under the ambit of America’s electoral system, only to score political brownie points out of the widened voter base, Democrats had touted the controversial ‘For the People Act’, which had passed the House of Representatives in March itself. For the Biden administration, the passage of the brazen Act, which aims at increasing the blue party’s voter base, was a magnificent victory. However, ‘For the People Act’ being passed by the Senate was always a radical proposition.

To somehow ensure that it does, Joe Biden had made Kamala Harris in-charge. She was supposed to make sure that the Democrats secure a victory in the Senate, and pass the overzealous bill aiming to brazenly federalise American elections. Well, guess what? To nobody’s surprise, the ‘For the People Act’ has fallen right on its face, as it failed to even get taken up for debate by the Senate – in what came as a humiliating defeat for the Biden administration and a personal embarrassment for Kamala Harris.

Kamala Harris had previously proven to be a failure on a variety of issues – the biggest of which has been the Vice President’s inability to control the Southern border crisis. Biden had entrusted her with the task of ensuring that the voting reforms proposed by Democrats pass Congress – and she failed miserably at her job.

Kamala Harris, of late, is getting handed the most difficult of tasks by her boss. She is failing to meet her targets on all counts, thereby resulting in her reputation of being an effective leader taking a massive drubbing. Is it a coincidence that Kamala is also leading the Biden administration’s charge on selling the “American Rescue Plan,” advocating Biden’s infrastructure package, representing women in the workforce, highlighting the Black maternal mortality rate, assisting small businesses, assessing water policy, promoting racial equity, combating vaccine hesitancy, and fighting for a policing overhaul all at the same time? We think not.

Someone very powerful seems to be hell-bent on ensuring that Kamala Harris is seen as a failure, and she is not disappointing anyone on that count. By failing to meet her targets, Harris’ bid for winning the next presidential polls is taking a hit with every passing day, as Americans begin viewing her as unfit for public office. Of course, her horrifying fits of laughter are also making the Vice President extremely unlikable.

When the Senate failed to advance the ‘For the People Act’ to the floor even for a debate, Kamala Harris was presiding, and in a defeatist tone, she made the announcement that the motion had failed. In a vote of 50-50, it fell short of the 60 votes needed to overcome a GOP filibuster. All Democratic Senators voted to begin the debate, and the Republicans unanimously voted to block it. Her real failure is not that she could not get the legislation passed in Congress, but that she could not even get the Senate to debate it.

Read More: Looking into the ‘root causes’ of why Kamala Harris is never going to be the President

The ‘For the People Act’ aimed to, among other utopic provisions, set up automatic voter registration, expand early voting, ensure more transparency in political donations and limit partisan drawing of congressional districts. Above all, it almost removed any serious need for voters to produce identification documents for voting. And we all know which communities the Democrats were targeting to benefit most by their random, unverifiable votes.

The Act could have made American elections a tool for the Democrats to keep electing themselves to power. As much as Joe Biden and Kamala Harris would love that, the Republicans have spoilt the party for them, which is why Biden, Harris and Democrats are naturally frustrated.

Joe Biden – by taking some time out of his packed sleep schedule, took the trouble of releasing a statement in which he said, “Unfortunately, a Democratic stand to protect our democracy met a solid Republican wall of opposition…It was the suppression of a bill to end voter suppression—another attack on voting rights that is sadly not unprecedented.”

Effectively, Biden touted Democrats as the ultimate, Avengers-like guardians of democracy, while Republicans were the ones looking to dismantle it. Biden, of course, did not mention that Republicans are the ones trying to protect the sanctity of American elections, votes and outcomes – by ensuring that illegal, undocumented immigrants who are not American citizens are not allowed to vote. For reasons best known to the Democrats, they are up in arms against the GOP for their enthusiasm at protecting the idea of America.

TFI has already explained how it is Biden who is imperilling Kamala Harris’ portfolio and making her an unviable presidential candidate for the 2024 elections for the Democrats. By giving her difficult tasks which are impossible to achieve, Biden is ensuring Harris is seen as a failure. And the President is scoring one victory after another towards ruining Kamala Harris’ track record.