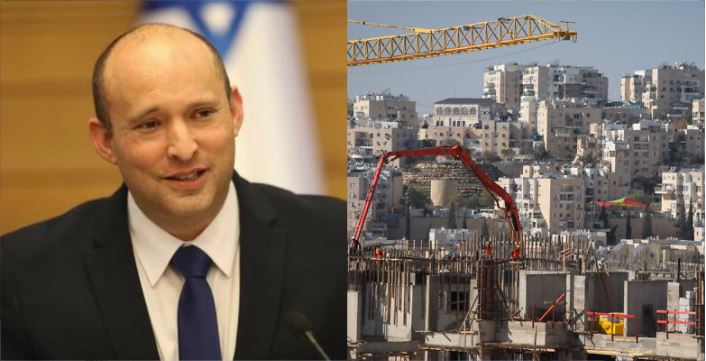 A Defence Ministry panel allowed new construction in multiple West Bank settlements on Wednesday, the first such decision since Prime Minister Naftali Bennett’s new administration took office. The High Planning Subcommittee of the Civil Administration approved 31 projects, including the construction of a mall in Mishor Adumim, a special needs school in Elkana, and synagogues and Jewish seminaries in Karnei Shomron and Kfar Adumim.

The Yesha Council settlement umbrella group, in response to the move, demanded that the High Planning Subcommittee reconvene to approve the construction of West Bank settlement dwellings, not simply public building projects.

“We’ve been waiting for half a year for the approval of homes and it still hasn’t happened,” the group said in a statement, “The building committee must immediately convene to approve the building of housing units throughout the region. We’ve waited long enough.”

Ayman Odeh, the leader of the Joint List, has denounced the Bennett government for authorising any construction in the settlements. “The left caves to the right and sidelines the diplomatic issue, but the right continues to sabotage the prospects for peace and deepen the occupation, the oppression and dispossession of millions of Palestinians,” said Odeh, who heads the prominently Arab Israeli opposition faction.

Two dovish parties, Labor and Meretz, as well as the Arab-Israeli Ra’am party, opposed settlement construction under the current government.

The decision comes after Foreign Minister Yair Lapid announced on Monday that an unlawful West Bank outpost will be demolished in accordance with army orders and that the matter would not cause divisions within the fragile coalition government.

Lapid, who is also alternate Prime Minister, told Zman Israel, The Times of Israel‘s Hebrew sister site, that the community’s fate was not in doubt in his first public statements since taking office. “The outpost will be evacuated,” he said, “It is illegal. It is not at all a question of right or left. It is an order from the army and the civil administration.” Lapid’s comments come a day after the army turned down a settler’s petition to keep the outpost from being demolished.

Local Palestinians claim that they used to work on the land on which the outpost was established, but that they have since been barred from entering the region by the Israeli army. The Civil Administration, an Israeli military entity in charge of Palestinian civilian matters, including land registration in the West Bank, says it has not yet identified who owns the land. Uncultivated land can revert to public ownership under West Bank property rules.

Over the previous two months, the outpost has swelled to almost 50 buildings, housing dozens of families. According to the outpost’s Facebook page, Evyatar keeps the adjacent Palestinian villages connected while connecting the Israeli settlement of Tapuah to the Za’atara Junction and the Migdalim settlement.

The Change Bloc comprises parties from across the political spectrum, united to oust Netanyahu as Prime Minister. Naftali Bennett, whose party received only 6 seats in the Knesset was made the Prime Minister for the first half of the government tenure because of the position of power he held in making the coalition successful. However, it was because of the Ra’am party that the Change bloc was able to drag itself across the magic number of 61 to form the government.

Though this time, Bennett has successfully forced his right-wing policy on the bloc, if he continues to do so, the Change bloc could disintegrate. The Ra’am party has already voiced its opposition to the above mentioned policy but has not roadblocked it from being a reality. But if this continues, and Bennett keeps pushing his right-wing policies over the agenda of his other coalition partners, then it would not take much time for the Change Bloc to fall apart.