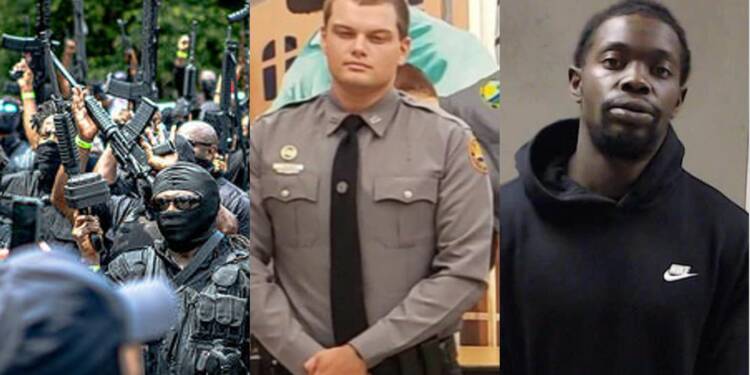 An all-Black nationalist militia has claimed its first victim, belonging to the police. Since the Black Lives Matter (BLM) anarchistic agitations of last year, hostilities towards the police in the United States have incredibly risen. Far-left radicals and Black supremacists have been calling for the police to be defunded, essentially advocating a complete breakdown of law and order across America. It was sometime in 2017 that the “Not Fu*king Around Coalition” or NFAC came into being. Ever since the armed extremist militia has been in the news for all the wrong reasons.

Essentially, the NFAC is an anarchistic organisation that does not rule out violence as a means to fulfil its goals. Now, the NFAC has been accused of shooting police officer Jayson Raynor in the head. The officer was left in critical condition on Wednesday due to the firing by the Black extremist. Thereafter, a massive manhunt was launched against the shooter called Othal Wallace. The manhunt culminated on Saturday morning after cops found the defiant suspect hiding in a Georgia property affiliated with the NFAC militia group.

As he was taken into custody, Wallace told cops, “You guys know who I am. You know what I am capable of. It could’ve been a lot worse,” Daytona Beach Police Chief Jakari Young said at a news conference. The 29-year-old suspect was armed with flashbangs, two rifles and two handguns when police found him in a treehouse just outside Atlanta. The tone in which the shooter spoke made it clear that he had some very powerful, armed and violent friends and affiliations.

The NFAC is an all-Black paramilitary militia based out of Atlanta with members around the nation. In July 2020, it held an armed march at Stone Mountain in Georgia, the site of the largest Confederate monument in the country. When the NFAC marched in Louisville in July last year, a militant of theirs dropped his weapon and injured three other NFAC members with buckshot.

But here’s the real catch. Unlike White supremacist armed groups, this Black militia is not a victim of biased and hateful media coverage in the United States. Except for conservative media houses, absolutely no one seems to see fault with this militia group openly threatening law enforcement officials and Whites.

CNN for instance – the eternal liberal media organisation held a conversation last year with the militia’s founder – Johnson, who is also known as Grand Master Jay. It published a comprehensive report regarding the NFAC, dissecting what the militia really is – and what it is shown to be. According to CNN, “Several militia experts also described the group as a counterpoint to some of the largely White armed groups in the United States, especially those that have been associated with White supremacist and neo-Confederate ideologies.”

CNN quoted the militia founder as saying, “Nobody says anything when other demographics pick up weapons, decide to arm themselves and confront the government over anything from wearing a mask to being cooped up in the house, but when certain demographics arm themselves all of a sudden people tend to act as if the Constitution doesn’t matter.”

The liberal organisation also quoted one professor of history at DePaul University and author Thomas Mockaitis, who outrightly declared, “There’s no moral equivalency when comparing NFAC to White armed groups.”

CNN is not the only liberal media outlet to have adulated NFAC. The media’s pro-NFAC coverage has emboldened the militia group to now begin shooting and attacking police officers. Soon, they could very well be looking to do the same with just about any ordinary White citizen.

Despite Russia’s warnings, Biden is sending the US Navy to Black Sea alongside UK. The repercussions can be grave