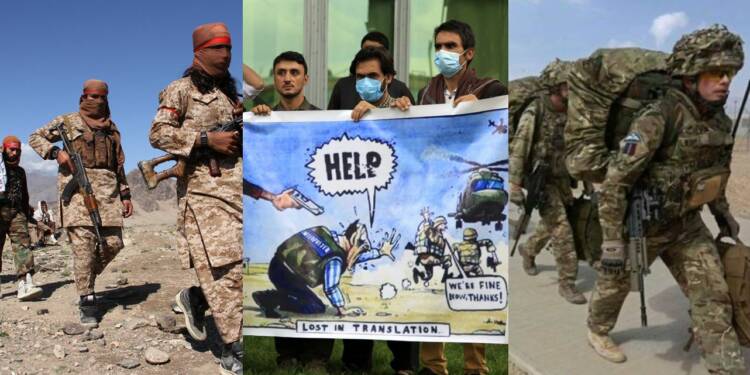 Time is running out for thousands of Afghans who assisted the US as the Taliban reclaim territory as the US winds down its longest war in Afghanistan.

The US war in Afghanistan started in 1999 without producing any strategic gains on behalf of the Afghan government. $2 trillion and 2300 lives were lost as the United States struggled to gain a decisive victory. Under former President Donald Trump, the US started to withdraw troops in a planned manner, however, he lost the election and the withdrawal plan was scrapped and tossed aside, only for Joe Biden to revert to his predecessor’s policies but without plans for an effective withdrawal. A mistake had been made and now the people in Afghanistan who had helped the US troops are being chased by the Taliban.  Afghanistan citizens only sin was to help the US war, and now the United States has left them undefended, underprepared and facing death.

Sherin Agha Jafari is one of 18,000 interpreters and their families targeted by the Taliban when US soldiers leave. He was on his first day as an interpreter with a US combat platoon when a roadside bomb hit his vehicle. “It was my first experience, and it was the worst experience,” he said.

But a much worse situation was yet to arise. Sherin and his father Abdul had gone to sell their family home as Taliban militants came knocking at the door. “We just saw people climbing the walls. People with long beards, guns in their hands. They came inside. They kept questioning. ‘We know who you are,'” Jafari said. He said they had no choice but to try to flee.

White House Press Sec. Jen Psaki and President Joe Biden have repeatedly promised and assured that the Afghans who risked their lives to help the U.S. “are not going to be left behind.”  While their visas are being processed, the US State Department is working on mass evacuation arrangements to move the interpreters and their families to a third nation. It’s a massive undertaking that will require the airlift of 60,000 to 70,000 people.

The situation in Afghanistan, on the other hand, is deteriorating. Overnight, the Taliban retook the northern region, forcing over 1,000 Afghan forces to flee to Tajikistan. Jafari knows there’s no guarantee that speaking up will help save his life. “We are right now at the final stage. They are going to slaughter us anyway,” he said.

According to the new commander of Bagram Airfield, the US soldiers left the site in the dark of night without informing the Afghans. The US left Bagram at 03:00 local time on Friday, according to General Asadullah Kohistani, and the Afghan forces found out hours later. Bagram also houses a prison, where up to 5,000 Taliban detainees are believed to be housed. As US soldiers exit from Afghanistan, the Taliban has made rapid gains.

Thousands of Afghan families are fleeing the Taliban’s fast push into the country’s northwestern provinces. According to Mohammad Amiri, a deputy spokesman for President Ashraf Ghani, extremists have burned down fields and caused civilians to flee their towns and villages. “The Taliban prefers violence over talks and has accelerated its violence nationwide in order to achieve its own political agenda.”

During their five years in power (1996-2001), the Taliban, Afghanistan’s Islamist zealots, committed numerous atrocities, including systematic massacres of perceived opponents, destruction of traditional culture and education, brutal executions, and suppression of women, including the sale of many into sex slavery.

The US’s abrupt and unplanned withdrawal is a nightmare situation for Afghanistan and the Afghans who had helped the US. And no peaceful end for them appears to be in sight as the US drags on the diplomatic and bureaucratic hoopla which would cost countless Afghani lives.