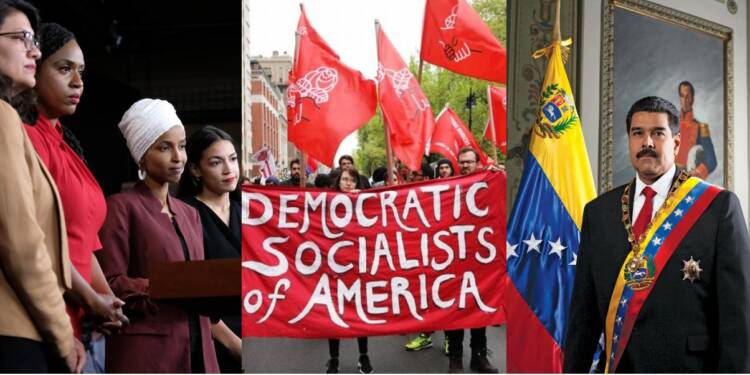 According to news reports, the Chairman of the National Political Committee of the DSA, members of the International Committee, and the Organization’s Political Formation, Foreign Policy and Bilateral Relations committees participated in the meeting. The Virginia chapter of the DSA confirmed the meeting with Venezuela’s communist dictator. “The members of the Democratic Socialists of America (DSA) meet directly with President Maduro. Big things are happening in our organization,” a social media post for Tidewater Democratic Socialists of America (DSA) said. The fact that the far-left leaning members of the Democratic Party popularly known as the Squad, have been endorsed by the same organization and they maintain a strategic silence on the issues and criticism of Venezuela, shows their loyalties and inclinations.

While the Democrats have been relatively silent on Venezuela, the Republicans under Donald Trump missed no opportunity to criticize the Venezuelan dictator as well as professed them to be the model communist state that should be taken care of by any means necessary. However, democrats who too should be criticizing the communist regime in Venezuela, have kept mum and from time to time showed their own support to Maduro’s policies, with the most vehement supporters being the Squad members as well as Bernie Sanders.

Any attempt by a Biden administration to extend an olive branch to Venezuela is bound to push the White House closer to the Communist world. Countries like Russia, China and Cuba back the Maduro regime. And while Biden continues to hate Russia rather dogmatically, China and Cuba will try to use any Venezuela-US negotiation for improving their own relations with Washington.

But Biden’s apparent bonhomie towards Venezuela is not a mere diplomatic manoeuvre. Rather, it seems like a consequence of the increasing influence of the Squad, on the Democratic Party. Biden’s Presidential campaign was organized on lines of Bernie Sander’s ideological ambitions and since taking office, most of Biden’s promises are actually a manifestation of Bernie’s socialist dream, which are being consistently supported by the ‘second generation Bernies’ of the Squad.

Bernie himself has been a long-time fan of Venezuelan socialism. In 2011, Sanders even endorsed an editorial reading, “These days, the American dream is more apt to be realized in South America, in places such as Ecuador, Venezuela and Argentina, where incomes are actually more equal today than they are in the land of Horatio Alger. Who’s the banana republic now?” under the ‘must read’ section on his official website.

Read more: As Biden sucks up to Maduro in Venezuela, his Communist leanings are out in the open

In the latest, Latin American multimedia platform, Telesur, wrote that one of the goals of the meeting between Maduro and the DSA was to “strengthen the fight against the blockade and the coercive and unilateral measures imposed by the United States government.” While the Democratic Socialists of America (DSA) leadership did not respond to The Epoch Times’ request for comment on the meeting, in March they made a statement criticizing the Biden administration’s policies towards Venezuela.

“US Secretary of State Antony Blinken met with right-wing opposition leader Juan Guaidó and, illegally and against the will of the Venezuelan people, recognized him as interim President of Venezuela. The International Committee of the DSA said in a press statement. “This act by the Biden administration is the latest in a long history of innocent and illegal US interference in the region, carried out by bipartisan consent.”