An activist, $300 million aid, and an explosive warning from Egypt: How Joe Biden is caught in a fight between Democratic moderates and progressives 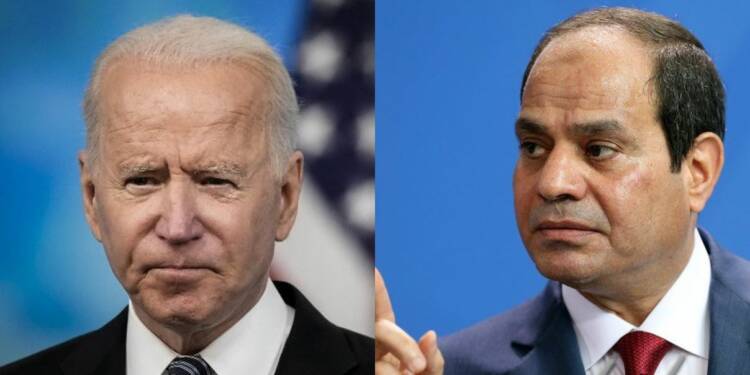 An Egyptian-American activist – Mohamed Soltan is at the centre of a massive headache for President Joe Biden and his top aides. Of late, the powerful lobby of progressive and far-left Democrats have been looking to cut all military aid currently being sent to Egypt by the United States. This aid amounts to approximately $300 million. However, the Democratic party and the U.S. State Department is split into two factions regarding the issue – while one faction is calling for the aid to continue given Egypt’s geostrategic significance for the United States, the other is calling for the aid to be stopped owing to the Egyptian government’s human rights abuses and repression of dissidents.

Among those who oppose any move to cut down the aid or block it altogether is the State Department bureau that deals with the Middle East. Interestingly, just when the anti-Egypt faction was beginning to gain momentum and at least appearing to take the lead in ensuring that the $300 million aid is at scaled down, Cairo dropped a big bombshell in Washington DC. According to Politico, during a visit to Washington last month, Egypt’s spy chief made a claim that startled U.S. lawmakers already worried about human rights in the Middle Eastern country.

According to Abbas Kamel – the Egyptian spy chief, the United States had promised back in 2015 that if Egypt released activist Mohamed Soltan, he would serve out the rest of his life sentence in a U.S. prison. However, Kamel claimed that despite a written assurance by the United States, which he produced before Capitol Hill staffers and other senior officials, activist Mohamed Soltan was free and living in Virginia, when he should have been serving a life sentence at a U.S. prison.

The Egyptian official even handed the document to Hill staffers, that appears to be a signed agreement between Egyptian and American officials laying out such an arrangement. Egypt had charged Mohamed Soltan with terrorism-related offences, including spreading “false news”. With this explosive document being personally delivered to American officials, Egypt has sent out a resounding message – any attempts to cut down or block the $300 million aid to Cairo will have unexpected and severe consequences for the Biden administration. Incidentally, the document produced by Abbas Kalem dates back to 2015, which is to say that the then Obama administration was in on this agreement.

The Arabic-language document purports to have been signed by a U.S. embassy representative and a representative of “Interpol Cairo.” It states that Mohamed Soltan is to be sent to “his home country to resume his sentence under the oversight of the appropriate authorities.”

Read more: With a naval base right into the mouth of Libya, Egypt and UAE have begun the dismantling of Turkey-backed regime in Libya

Progressives within the Democratic Party have been pushing Joe Biden to act tough on Egyptian ruler Abdel Fattah El-Sisi, who they say has imprisoned tens of thousands of dissidents. The alliance between Democrats and the Muslim Brotherhood is no secret. In fact, the very reason why Barack Obama orchestrated the Arab Spring protests was to ensure that the Islamist movement gains power across the Middle East.

In May, seven progressive U.S. senators, including Elizabeth Warren of Massachusetts and Sherrod Brown of Ohio, wrote a letter to Secretary of State Antony Blinken urging him to hold back the $300 million. According to Politico, officials with the State Department bureau that is focused on human rights are arguing for withholding the money, saying that Sisi’s human rights abuses are unpardonable and that action is required. The publication stated that the State Department’s Bureau of Political-Military Affairs is signalling that they may side with the human rights bureau this time.

This would pave the way for the aid to be cut down. Thereafter, the ball would be in the Secretary of State Antony Blinken, or subsequently, President Joe Biden’s court. If they decide that the aid must continue to flow to Egypt, it will flow despite the State Department’s decision that it must be cut down. Egypt has sent a message to Biden and his top aides – ensure free flow of military aid to us, and we keep all your secrets locked inside our closet.

However, Biden cannot antagonise the progressives and far-left activists within the Democratic party, who want aid to Egypt to be cut down significantly, if not blocked entirely. Domestically, it has been seen that Biden readily follows the far-left agenda. When it comes to replicating the same in foreign policy and international relations, however, the septuagenarian president trembles. And then, Egypt has given him all the more reason to weigh his administration’s actions. The old man is caught between a rock and a hard place now.

Japan has some big plans for China and obviously those aren’t good for the paper dragon.