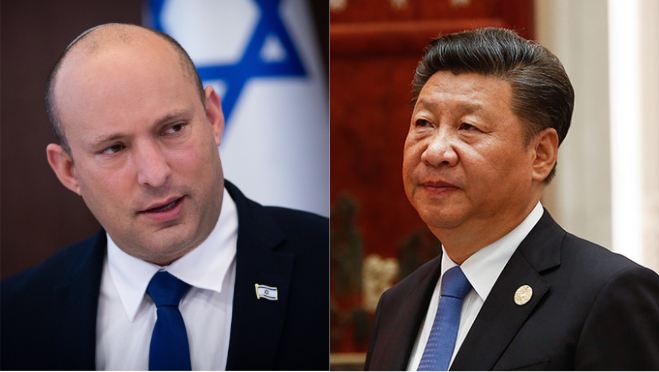 China is Israel’s second-largest trading partner after the United States. It is also involved in multiple infrastructure projects in the Jewish nation. Over the past few years, ties between China and Israel have grown from strength to strength. However, as the free world order steps up pressure against China for its brutal treatment of Uighur Muslims in Xinjiang, the CCP is now cleverly posturing itself as a formidable proponent of the Palestinian cause. The strategy behind China’s rather cringeworthy support for Palestine is that while the U.S.-led democratic world steps up pressure against the CCP for brutalising Uighur Muslims, they continue to ignore the supposed plight of Palestinian Muslims.

To add momentum to China’s endeavour of being seen as a country which stands for the rights of Muslims, State Councillor and Foreign Minister Wang Yi held talks with Egyptian Foreign Minister Sameh Shoukry and met with Secretary-General of the League of Arab States Ahmed Aboul Gheit respectively, in El Alamein. The objective of these meetings was one – Palestinian ‘freedom’. The Chinese foreign minister gloated over the fact that his country, being the rotating President of the UNSC, facilitated five Council meetings so far to review the “Palestinian question” amid the conflict between Palestine and Israel.

In line with China’s endeavour to be seen as a nation which supports the rights of Muslims, its foreign minister – on behalf of the CCP, proposed three ideas to resolve the Israel-Palestine conflict. China has proposed that as a prerequisite to finding peace in the region, the authority of the Palestinian National Authority be enhanced, and the PA be authorized to exercise sovereign functions in security, finance and other areas, so as to gain effective control over the autonomous and “occupied territories”. This is a move aimed directly against Israel, which has managed to keep itself safe so far by having amiable ties with the Palestinian Authority and its ruling Fatah.

Second, in a move which is aimed at directly mainstreaming Hamas and allowing it to take control over the West Bank, China has proposed that “the Palestinian factions should be supported for greater unity, whereby they can achieve internal reconciliation through consultation and dialogue, and come to a unified position on talks for the settlement of the Palestinian question.” Now, the second point is contentious – to say the least, as it talks about support for Palestinian factions, which also include Hamas.

China, therefore, wants to facilitate a reconciliation of sorts between rival factions – Fatah and Hamas, which rule over the West Bank and Gaza respectively. Any support to Hamas will lead to it exerting greater control over the West Bank – and this is simply unacceptable to Israel. For China to even think of facilitating the growth of Hamas in the West Bank would be seen as a hostile move in Israel, which will take steps to ensure that such efforts do not fructify.

Israel is already taking steps to ensure that the Palestinian Authority – ruled by Fatah is supported in its power struggle with Hamas in the West Bank. Hamas is gaining traction and popularity in the West Bank – which is a security threat for Israel. Hamas wants to see its rival faction – Fatah kicked out of power, and wants to take control of the Palestinian Authority upon itself. China seems to be helping Hamas do so, and therefore, Israel has now begun considering restricting debt collection from the PA to ensure its financial and political stability. This will help the PA overcome its financial woes, which in turn will lead to its position against Hamas being strengthened.

Within the West Bank, the Palestinian Authority is surviving on a very weak position. Earlier this month, hundreds of Palestinians protested against the Fatah-ruled PA in Ramallah, thus demonstrating the general sense of aversion which people in the West Bank have come to harbour against Fatah. This could further propel the Hamas’ rise in what has historically been a Fatah-stronghold, and Israel will do all it can to prevent the same.

Finally, China has called for the resumption of peace talks between Palestine and Israel based on the “two-state solution”. A press release by China’s foreign ministry said, “Palestinian and Israeli negotiators are welcomed to conduct direct talks in China. In the meanwhile, China calls for the holding of an international peace conference led by the UN with the participation of the permanent members of the UN Security Council and all stakeholders in the Middle East peace process to seek a comprehensive, lasting and just settlement of the Palestinian question and to enable Palestine and Israel to co-exist in peace.”

Recently also, at a virtual Palestinian-Israeli Peace Symposium convened by the Chinese Foreign Ministry, Wang Yi expressed the intentions of China to step up its involvement in mediating efforts to resolve the Israel-Palestine conflict. Yi said that China wanted the Geneva Initiative to play a greater role in expanding dialogue and reaffirmed the two-state solution as the only path towards a resolution. Like many other peace initiatives, the Geneva Accord has also failed to establish peace between Israel and Palestine, primarily due to the latter’s inability to eliminate anti-Jewish elements.

China is making itself an enemy of Israel. Already, the red rogue state has stretched its luck way too far during the Israel-Hamas war, by facilitating Palestinian propaganda via its state media channels. As the Israel-Gaza conflict escalated in May, Beijing decided to toe Iran’s line and support the Palestinian cause, at the expense of Israel. China waged an anti-Israel campaign at the United Nations during, and after the 11-day-war between Israel and Hamas.

Now that China has decided to unify Palestinian factions and facilitate the rise of a consolidated front which will challenge Israel, Tel Aviv is not expected to sit back and observe all of it as a mute spectator. China has made a very formidable and lethal enemy, and now stares at the prospect of suffering tremendous losses due to the same.