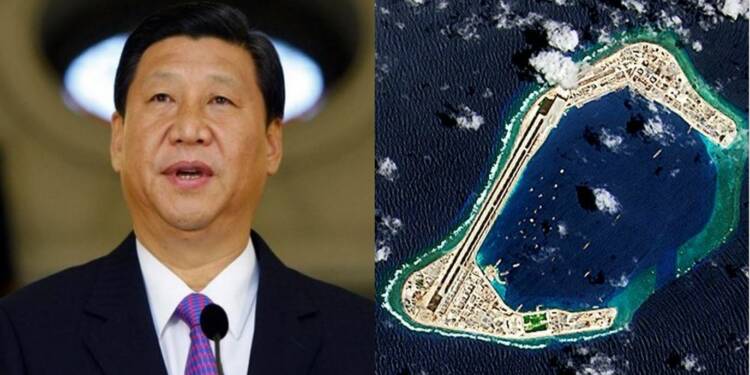 The world is filled with examples of up and coming or established large powers making, very obvious, yet very expensive strategic mistakes. Be it overconfidence or sheer ignorance, China is time and again repeating the same mistakes and investing heavily into the sinking artificial Islands of the South China Sea. Beijing has opened a massive military base on a disputed island fortress in the strategic region of Subi and Mischief Reefs. Satellite photographs obtained by the Washington Times show PLA KJ-500 airborne warning and control aircraft deployed at Mischief Reef in the Spratly Islands in May and June, as well as a Y-9 transport aircraft and Z-8 helicopter stationed at Subi Reef.

While it was the Obama administration under whom China was successfully able to create artificial islands in the South China Sea out of thin air, and after a short spell of hiatus during the Trump era, China is back at its old habits and as Joe Biden is long asleep in his Chinese slumber, Xi Jinping is fortifying the artificial Islands and reefs in the disputed region and trying to stamp Beijing’s authority in the region. While in any other scenario it would have been bad news for regional powers, the fact that China is trying to triumph over nature will only turn out to be one of the biggest blunders of the century, just like China’s attempt to conquer the rivers.

By undertaking such endeavours which are sure to fail at a time when the country is facing a major economic crisis, China seems really desperate to become poor even faster than it reached economic prosperity. Despite several other countries having seemingly genuine claims under international law, such as Taiwan, Malaysia, Vietnam, the Philippines, and Brunei, Beijing claims ownership of the majority of the disputed area of the South China Sea.

Former naval intelligence officer Michael Dahm, who currently works with Johns Hopkins University says new satellite photos show the deployment appears permanent. He told the publication: ”The most significant change in military posture in 2021 is the appearance of Chinese special mission aircraft and helicopters at Subi and Mischief Reefs, indicating the PLA may have commenced routine air operations from those airfields.”

However, these mega infrastructure projects and heavy weaponry, as well as sophisticated transportation arrangements, can last on these Islands as long as the islands stand. Beijing has successfully built several major military bases on such artificial structures complete with ports, airstrips, radars and missile installations.

These artificial islands that were built at a huge cost served as unsinkable carriers for China. More importantly, the right to harness resources is essentially tied with the coastline in international law. According to the United Nations Convention on the Law of the Sea or UNCLOS, an area within 200 nautical miles from the baseline of a country’s coastline is its exclusive economic zone, where it has exclusive economic rights. China’s plan was to game international law by building artificial islands, but these expensive, man-made Chinese islands are now getting submerged in the disputed South China Sea waters.

While these projects came at a huge environmental cost as reefs were pulverised by China to create raw materials for its man-made bases, nature has its own sweet way to exact revenge. Late last year, the Economist reported, “Rumors suggest the new islands’ concrete is crumbling and their foundations turning to sponge in a hostile climate. And that is before considering what a direct hit from a super-typhoon might do.”

China seems to be willfully oblivious of these realities and still believes that these Islands are some permanent structures that even nature cannot take on. Australian Institute of International Affairs (AIIA) national executive director Dr Bryce Wakefield told news.com.au that the recent deployments show China is attempting to increase its control over the region. ”These aircraft will allow China to use assets in the region more effectively, its so-called maritime militia, for example, to wage their campaign of harassment in scenarios short of war.”

China may try to intimidate and browbeat regional powers by these structures, in reality, they are just as fragile as the paper dragon itself. For all the hype that was being generated around China’s many artificial islands, the expensive Chinese plan to expand influence in the South China Sea is turning out to be extremely expensive and highly disappointing. China is trying so hard to project itself as powerful that it is investing extensively into sinking Islands, thereby sinking its economy in the process.