Hoax of pop hold it down lady’s death 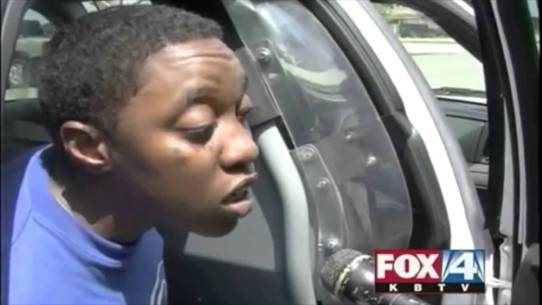 POP hold it down lady Donna Goudeau,” isn’t dead, and she was not killed in prison. A false report on a sarcastic website Huzlers.com is saying otherwise.

The fake article had thousands of shares on social media websites on Wednesday. Users on Twitter were confused by the article.

“Damn man Donna Goudeau got murdered in prison!!!” wrote one person. Added another: “No more holding it down. Damn. RIP to Donna Goudeau.”

Said another, “The POP Hold It Down lady died in prison.”

Huzlers has had a number of its articles go viral over the past year or so, including false reports with titles like WorldStarHipHop Shutting Down January 15th (of 2014), “59 People Die of Marijuana Overdose in Colorado and Washington,” and “Lil Boosie Lands in Jail Again for Marijuana Possession.”

Here’s what part of the false Huzlers article about Goudeau says:

It is being reported that Donna Goudeau, the woman who is known for saying “POP Hold it down”, “barely”, and “I’m legally blind”, was stabbed to death earlier today in prison after apparently getting into a fight with another inmate, who happened to have a hidden blade.

Donna Goudeau became popular in 2014 after footage of her arrest in 2011 went viral on the internet. Donna Goudeau, Keyron DeWayne Elmore and Jeremy Jomard Goudeau were arrested for the beating, robbing and stabbing of a 73-year-old Kansas man by the name of Juan Sustiata. Donna was sentenced to 18 years in prison and was scheduled to be released in 2029.

Uproxx gave reference to the clip and denied the possibility of the killing of the viral video lady, Donna Goudeau and already declared the entire report to be fake and a hoax to cater more attention towards the website.

Goudeau earned the cherished honor of becoming the latest viral sensation on the Internet when her three-year-old arrest video surfaced online. She posed for a mugshot after she and two of her friends were charged with aggravated robbery in Texas a few years ago. In 2003, she was sentenced to 18 years in prison for aggravated robbery and violating probation for assault.

This story appeared on July 18, 2019, in an article from the archives of Urban Industry News titled “Pop Hold It Down lady : Donna Goudeau Murdered in Prison.”. Donna Renee GoudEau is a Texas prison inmate, and the Texas Tribune has information about her incarceration at the Murray Unit. The story behind it is an old news clip shot in July 2011, in which the exact reason for the arrest of Gaudeau by the “pimp squad” was that she was a serious person.

Donna Jean Thatcher will face court in the Drug Impact Court on December 5 over a pending application to have her parole revoked. According to Beaumont Enterprise, Donna Wells is in jail along with Keyron Elmore, 28 and Jeremy Jomard Goudeau, who were arrested for raping, robbing and stabbing a 73-year-old Kansas man named Juan Sustiata. Donna Renee GoudEau, a woman formerly known as the “Say Pop, Hold It Down” and “Blind Keyron DeWayne Elmore” and Jeremy “Jomard” Gaudeau, was arrested for the beating, robbery and stabbing of Juan SUSTIATA.

Rumors suggest that Goudeau was stabbed and killed by a fellow inmate in prison. Many believe the woman in the video, which went viral in October this year, was stabbed by another inmate. Witnesses say Donna and Victoria Hendricks started arguing and as the situation heated up Hendricks pulled out a blade and stabbed Donna.

Congratulations world. China is officially entering Afghanistan to never come out of it again