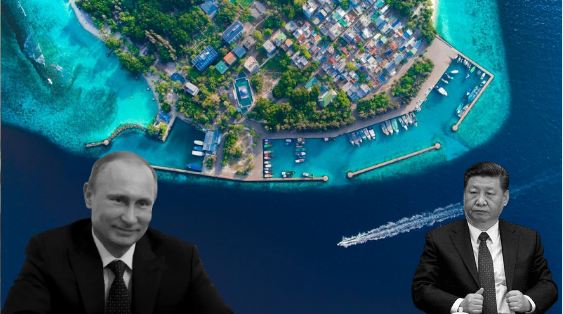 The global economy is getting back on its feet. After a devastating 2020, strong economic revival is being witnessed across the world, and people are realising that they must now live with Covid-19. Since life cannot come to a standstill, especially now that the world has gained access to Covid-19 vaccines, countries whose economy is entirely dependent on tourism and hospitality are cheering. Tourists are returning in big numbers, and among the big winners is Maldives – a small archipelagic state in South Asia situated in the Indian Ocean. It lies southwest of Sri Lanka and India, and is among the most popular tourist destination of the region. Therefore, Maldives is highly strategically placed in the Indian Ocean, and it is supremely beautiful.

Interestingly, until 2019, Chinese tourists were the foremost entrants to the Maldives. However, the Chinese Communist Party has decided to teach the Maldives a lesson for not being able to repay its debts to Beijing and for its close ties with India, which is why Chinese tourist footfall has nosedived. According to Maldives’ Ministry of Tourism, for the first half of 2021, only 738 Chinese tourists flew in, down nearly 97 per cent from the 33,889 during the same period in 2020. While the CCP is trying to strongarm the Maldives, Russia has jumped in for the island nation’s rescue.

Planeloads of Russian vacationers have been jetting into the Indian Ocean archipelago, in record numbers, making Aeroflot, the Russian national carrier, an increasingly common sight at Velana International Airport, the South Asian nation’s international gateway. According to a report by Nikkei Asia, Russian discovery of the Maldives in the time of COVID-19 is making up for a loss of tourists from China. Russia has emerged as the leading source of tourists for the first half of 2021, accounting for 124,651 vacationers. According to Maldives’ Tourism Ministry data, that is a dramatic 190 per cent increase from the pre-COVID-19 year of 2019.

According to luxury resort Soneva, which offers guests private villas that appear to float above clear blue waters, Russian vacationers accounted for 30 per cent of the bookings in the first half of this year, double the level in 2020 and a striking 80 per cent increase from 2019. Importantly, the Covid-19 pandemic last year left Maldives’ economy in deep pain, as the country witnessed an economic contraction of 32 per cent, compared with the regional average of 13 per cent. This was largely due to the drop in revenue from tourism, which accounts for 30 per cent of the country’s gross domestic product.

Meanwhile, Maldives’ top businessman, Mohamed Ali Janah recently told WION that his country was saved by India and Russia. Janah said, “India was the saviour. Indian tourists started coming, the Russian tourist started coming. I would say India, Russia saved the Maldives this time. As you can see the numbers, by July this year 132,000 Russian had visited and 100,000 Indians had visited.”

Read more: How India saw a debt-ridden Maldives and liberated it from the clutches of the evil CCP

India and Russia both share good ties with the Maldives, which is a vivid eyesore for China. In recent weeks, China has been suspected of fuelling anti-India activities in the Maldives using its proxies in the country’s media organisations and civil society. The archipelago nation owes around $1.4 billion in debt to China. The sum is huge for a small country like Maldives having a GDP of $5.7 billion. And then, many analysts also believe that the $1.4 billion figure might be a misrepresentation. The actual debt is feared to be much higher than the official figure.

In such a scenario, India had helped Maldives last year by providing financial assistance worth $250 million, for which the island nation’s government had profusely thanked New Delhi. China had been hoping for Maldives to default on its debt. However, the pro-India Ibrahim Soli government of Maldives is in no mood to either pay China, or give its strategic assets to Beijing as collateral. Therefore, it has been frustrating Xi Jinping, who thought that by stopping tourist inflow into the country, China would be able to teach the Maldives a lesson and show it how Chinese tourists were critical to its survival.

Surprisingly though, tourists from Russia and India are making up for the losses caused by China, and the Maldives is hardly feeling any difference. India has taken a lead role in protecting the Maldives from China. Last year, India also announced that it would provide half-a-billion-dollar funding to the island nation for several Infrastructure projects that will change the face of the archipelago. The 500-million-dollar financial package consists of a grant of 100 million dollar and a new Line of Credit (LOC) of $400 million.

India is garnering global support for the Maldives, and the sudden Russian tourist spike also looks like a move by both New Delhi and Moscow to jointly teach Beijing a lesson.