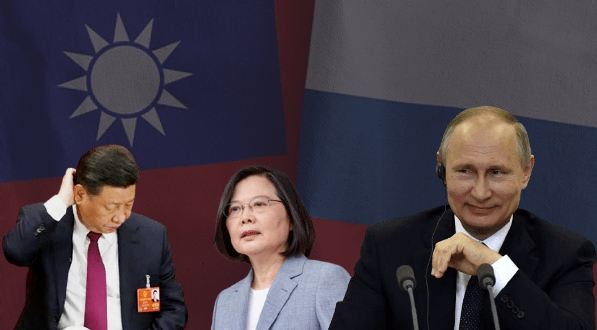 Russian President Vladimir Putin knows how to outsmart his competitors, especially when it comes to rogue leaders like Chinese President Xi Jinping. China wanted to undermine Russia’s interests in regions like Central Asia and Afghanistan. But now Russia is hitting back at China by joining hands with Japan and raking the issue of Taiwan, which is bound to leave China writhing in pain.

As per latest reports, a Russian state-media outlet has joined a growing list of international news agencies that have “rectified” the name of Taiwan or its flag in Olympic coverage. We are talking about Russia’s state-run RIA Novosti, which instead of displaying the white plum blossom for Chinese Taipei, carried Taiwan’s national flag on its online medal table. The fact that RIA Novosti is a state-owned broadcaster also shows how the Putin administration subscribes to the Taiwanese cause.

Several news agencies have carried symbols during the ongoing Olympic Games that seemed to support Taiwan’s independent character. NHK, Japan’s public broadcaster, too lists Taiwan as a country in Japanese Kanji. In fact, Japan has been leading the charge against China when it comes to encouraging Taiwan’s independence. Recently, Prime Minister Shinzo Abe also expressed a desire to visit the grave of Lee Teng-hui, Taiwan’s “father of democracy”, whereas the Suga administration removed Taiwan from China’s map in its defence white paper.

Therefore, Russia’s sudden signalling in Taiwan’s support can be read as a manifestation of Japan’s attempts to embolden Taiwan. Earlier in January also, Russia had dealt a major blow to Beijing by including Taiwan in its list of foreign countries ‘eligible’ for its unified e-visa program.

At the end of the day, Russia is getting pushed by Japan’s growing opposition to Beijing. Tokyo and Moscow are actually setting aside their differences only in order to ensure that China is cut to size. Even on contentious issues like the Kuril Islands, there are signs that Japan and Russia want to work together with each other. In fact, the two countries are looking to jointly develop disputed territory in Kuril islands.

The Kuril Islands dispute between Russia and Japan remains unresolved. However, Tokyo and Moscow understand that there is no sense in fighting each other over the decades-old dispute arising out of the Second World War. Instead, they want to address the bigger, common threat in the form of China. The Kuril Islands dispute is something that Japan and Russia can resolve between themselves, but handling China is a matter of priority for both these nations.

A bigger picture is also emerging here- China is trying to eat into Russia sphere of influence in Afghanistan, Ukraine, Central Asia and the Arctic. But Putin’s message to China is loud and clear- if you poke us in our backyard, we’ll poke you in yours. This is where Taiwan comes into the picture. What makes things worse for China is the fact that Russia is getting instigated by Japan, which doesn’t seem to lose a chance when it comes to weaponising the Taiwanese cause against China.