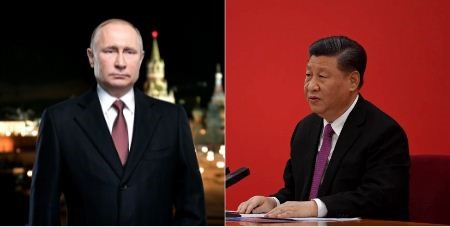 Russia is hated by the Democrats and the American deep-state. The European Union – which happens to lie just next to Russia is eternally ‘threatened’ by Moscow. So, the United States along with the EU have made it a point to punish Russia. These countries, frankly, have not been able to abandon their Cold War mentality.

With the Democrats back in power in the United States, hostilities with Russia are being pursued at an unprecedented level. Russia has accepted the fact that its ties with the ‘West’ have breached a point of no return. Moscow says as much in its latest National Security Strategy (NSS).

Russia has therefore been working on building lasting partnerships and friends across the world. From Africa to the Middle East, to Southeast Asia – Russia has managed to carve a positive image for itself. Moscow is seen as a reliable partner which, unlike the alarmist approach of the West, is hardly what it is portrayed to be. China has been historically seen as a positive neighbour by Russia. Especially when Moscow was at the peak of facing global isolation, China stood by it.

Ever since then, China under Xi Jinping has grown belligerent. It now seeks expansionism – both territorially as well as influentially. From staking a claim on the Russian far east and Vladivostok to trying to eat into Russia’s exclusive sphere of influence in Central Asia to now befriending the Taliban in Afghanistan – China is turning into a foe for Moscow. As a result, Russia is now decoupling from China.

On July 2nd, Putin signed an Executive Order “On the National Security Strategy.” The NSS is a key policy document in the security realm, which, according to the law on strategic planning, must be adjusted at least once every six years. The NSS emphasizes Russia’s ties with India and China, although it treads very carefully on the subject of relations with the latter.

According to The Diplomat, the partnership with Beijing and New Delhi are necessary for Moscow to create reliable mechanisms in the Asia-Pacific region to ensure regional stability and security on a non-bloc basis. However, the 2021 National Security Strategy of Russia makes one “ground-breaking” change, and this is extremely bad news for Beijing. Relations with India and China are combined in just one paragraph in the 2021 NSS, while in the 2009 and 2015 versions they were treated separately, with China preceding India.

Therefore, Russia is no longer giving China the importance it received in previous national security strategies. The attempt to avoid overdependence on Beijing dictates the way relations with China are characterized in the strategy.

While describing the China-Russia strategic partnership, there is no mention of a “new era” (this term from Xi Jinping’s diplospeak has been used in bilateral documents since 2019). Cooperation with China is no longer seen as a “key factor in maintaining global and regional stability” – at least, this is not emphasized publicly.

Read more: Russia has sneakily and meticulously encircled China from all directions and the CCP is too afraid to react

Russia is also trying to inhibit China’s Belt and Road Initiative (BRI) – which has emerged as an exploitative, neo colonial tool for China to subjugate weak nations. So, President Vladimir Putin has now come up with the Greater Eurasian Partnership (GEP). The GEP’s stated goal in the NSS is “Ensuring the integration of economic systems and the development of multilateral cooperation”. Effectively, Russia has come up with an initiative of its own to ensure that China does not end up monopolising ‘Eurasia’.

Additionally, what has also annoyed Russia is China’s growing bonhomie with Ukraine. Reportedly, Xi Jinping recently told his Ukrainian counterpart that China supported the sovereignty and territorial integrity of Ukraine. Given such a backdrop, for Russia to begin the process of decoupling from China was simply inevitable.

China has been poking President Vladimir Putin right in the face for quite some time now, and Putin seems to have begun the process of distancing Russia from Beijing. China will, as a result, emerge as the biggest loser.