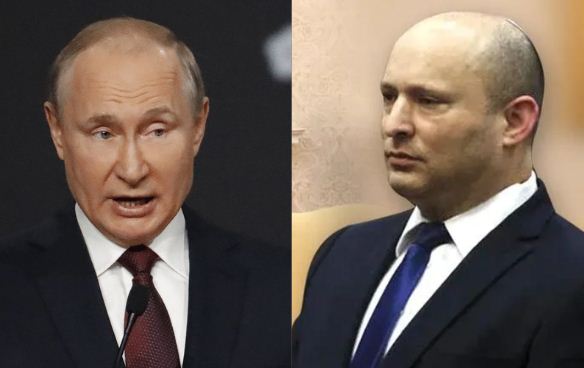 Israel’s relations with Russia are entering a rough, uneven and patchy phase. With Benjamin Netanyahu no longer the Prime Minister, Russia is looking to alter its engagement with the Jewish state, especially in Syria. The new Naftali Bennet government is domestically weak, and as a direct consequence of the same, does not have a clear foreign policy outlook – except for the agreement that Iran and the growing threat posed by it must be tamed. Benjamin Netanyahu was a good friend of former President Donald Trump, and under the leadership of these two leaders, U.S.-Israel ties reached new heights.

Now, both Trump and Netanyahu are out of office. And the Biden administration is inherently dominated by liberals, who do not have a favourable view of Israel. Russia, meanwhile, does not like the fact that Israel conducts airstrikes in Syria at will – mostly without even informing the Russian command in the country. With a new government in place in Tel Aviv, Moscow is beginning to posture itself differently, in a manner which many now believe will end up taking a toll on Russo-Israeli ties.

The claims by Russian Rear Adm. Vadim Kulit that Russian-made defense systems intercepted missiles fired recently by two Israeli F16 fighter jets toward targets near the Syrian town of Homs have raised many eyebrows not just in Israel, but across the world. According to Kulit’s comments to the TASS news agency, several days earlier, Russian defenses also successfully intercepted most of the missiles fired by Israeli jets at targets in Syria.

Russia has never really interfered with Israeli operations in Syria directly. That it has done so now, or has at least claimed to have intercepted and repulsed Israeli airstrikes is a significant development, and signals that Israel might no longer have the Syrian skies all to itself to counter the Iranian threat posed to it. Late last month, a report by Asharq Al-Awsat – the London-based Arabic daily sent even more alarm bells ringing in Israel. The publication cited a “well-informed” Russian source who said that in June talks between US President Joe Biden and Russian President Vladimir Putin, the Kremlin received the impression that “Washington does not welcome the continuous Israeli raids,” and believes Moscow can act more aggressively to foil them.

According to the unnamed source, the Russians are now supplying Syrian forces with more advanced anti-missile systems and knowhow, rendering them more effective at countering Israeli raids. Because of the new Russian policy, Syria was able to thwart Israeli strikes last week. The new Russian policy is aimed at taking advantage of the weak Israeli leadership, and forcing it to make concession in Syria – which include drastically limiting the use of air force over Syrian skies, and intimating Russia before conducting operations which are absolutely necessary.

The new posturing by Russia is dramatic, to say the least. Since the times of the Cold War, when Israel emphatically stood with the United States, the then Soviet Union made it a point to not antagonise the Jewish state. Israel is any world power’s key to truly establishing itself in the Middle East. It is a powerhouse of regional intelligence, and is a powerful force in the region. Remaining in the good books of Israel is necessary towards establishing a presence in the Middle East, and Russia has known this for the longest of time.

Despite Israel being among the foremost of American allies, Russia made it a point to never try its luck with the Jewish state. Especially after the Arab Spring protests and Russian intervention in Syria, there has been a general understanding between Israel and Russia that they both will mind their own business, and not cross each other’s paths. This arrangement, under the leadership of Benjamin Netanyahu and Vladimir Putin ensured that Israel and Russia developed extensive bilateral ties while not stepping on each other’s’ toes in the security realm.

Naftali Bennett, however, is proving to be a puppet Prime Minister, and Russia almost always flexes its muscles against countries with weak governments who make domestic concessions on a daily basis. The idea behind Russia doing so is that if the Israeli government is going overboard in making domestic compromises to please its coalition partners, it will also have to do so in terms of its foreign and security policy in Syria. A weak Israeli government is far more likely to step down on its Syrian campaign than, say, a government led by someone like Benjamin Netanyahu.

As reported by TFI, and as is generally known in Israel – the ‘Change’ government will not be lasting long. This rainbow coalition of parties from the far-right, centre-right, centre, centre-left and far-left will crumble eventually under its own weight. Naftali Bennet, although known as a staunch conservative, is simply buckling under pressure from his far-left and Arab partners. Whether it be the freezing of the Israel-UAE pipeline, or immediate reinstatement of Gaza’s fishing zone, Naftali Bennett has shown a tendency to not take a stand in favour of Israel, and domestically succumb to pressure from leftists and Islamists.

Russia is therefore testing the waters with the new government, and seeing how it can best optimise pressuring Israel into ceding space in Syria and cutting down on its campaign in the war-torn country. Moving forward, ties between the two countries are expected to deteriorate, and only a return of Benjamin Netanyahu will be able to arrest the deterioration.