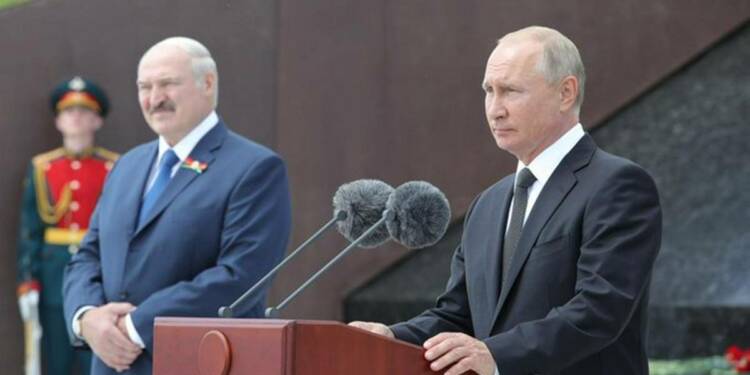 It is often said that one should be more aware of the blunders that close friends make. And one of the allies of Russia, Belarus’s dictator Alexander Lukashenko is committing one blunder after another. This time, he used Belarus’ Independence Day which is celebrated on July 3rd, commemorating the Soviet army’s liberation of the city of Minsk from the Nazis in 1944, to platform antisemitism. This not only complicates Russia’s relations with a small Jewish minority but also makes it a problem for Putin to gain influence in the Middle East, as Israel will surely remember and ask Putin for answers.

Lukashenko declared that, in contrast to the “tolerant” and “kind” people of Belarus, which allows the world to “spit in their faces” regarding the “holocaust of Belarusians,” no one today would “dare to raise a voice and deny the Holocaust” because “the Jews have succeeded in making the whole world bow down to them.” This was sharply criticised by Israel and as things go ahead, it may complicate the situation for Russia and Vladimir Putin in the Middle East, making an enemy out of Israel unintentionally. Therefore, as Lukashenko instigates anti-Semitism, it is only a matter of time before Putin takes him down, given it will be a small price for larger geopolitical interests.

Vladimir Putin has systematically ensured that while ties between him and Alexander Lukashenko flourish, the Belarusian President remains aware of who Putin is, and what he represents. The dynamic between the two leaders dates back into history. In 2002, in line with the German reunification model, Putin proposed that Belarus merge with the Russian Federation. Lukashenko did not like the idea. In 2004, Putin pushed for a referendum regarding the merger of Belarus with Russia and also called for elections to the state union – knowing fully well that he would win them. Even Lukashenko knew that Putin would win, and so, he again objected to the Kremlin’s proposal.

Read more: Belarus could soon be a part of Russia and there is a whole history behind it

Ever since then, the sole reason why Lukashenko is still in office is Vladimir Putin and the support he has from Moscow. Putin has been able to co-opt the Belarusian strongman to a great extent. In 2020, when Belarus’ streets were inundated by anti-Lukashenko demonstrators, it was Moscow, which had come to the Belarusian President’s rescue. The Lukashenko regime was, for all practical purposes, saved by Vladimir Putin. However, as he starts becoming a problem for Russia in the larger geopolitics, it will not be a big deal if Putin takes Lukashenko down and replace him with another more reliable person.

While Iran can somewhat be called a friend of Russia, but the relations have still not matured to an extent to be called as such. However, Russian President Vladimir Putin is a fan of Israel and the Jews. If the former KGB agent turned President’s remarks are anything to go by, he seems intent to imbibe a lot from Israel in order to achieve his goal of reviving the Soviet Union, by unifying former Soviet states into one federation. For fulfilling his reunification goals, particularly in the context of Ukraine, Putin suggested that Israel offered a good model which has a lot to offer. The Russian president suggested that Slavic people should take a cue from Israelis and unite as one people despite different ethnicities, origins, and maternal languages.

Read more: Russia will follow the Israeli model in its quest to reunify the lost USSR

However, the actions of Belarusian leader Lukashenko are making it difficult for Russia to get on better terms with Israel. The Jewish community has been particularly shaken by Lukashenko’s aggressive campaign of intimidation. Some members of the Jewish community were already hesitant to participate in pro-democracy demonstrations for fear of being labelled as yet another ‘foreign’ danger by the dictatorship. In addition to this, the recent antisemitic statements by him worsen the already problematic chemistry. It may not be long away when Putin takes him down given the cost will be much less than the otherwise consequence.