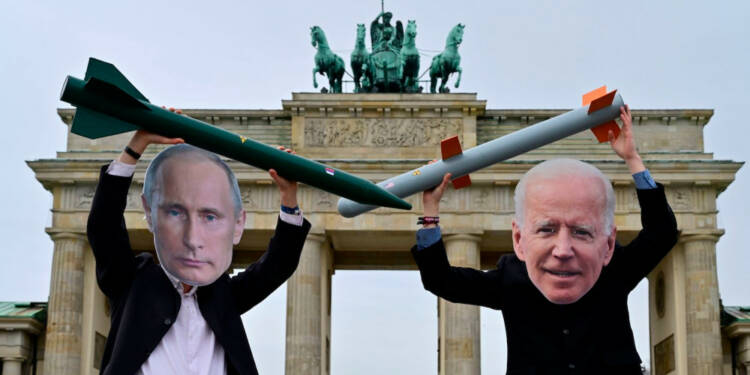 US President Joe Biden seems like a confused man. He doesn’t know how to take American leadership ahead in the highly volatile world order of today. Biden personally hates Russia but at a realistic level, China is the USA’s biggest enemy today. Yet, Biden has no idea about how to deal with the two authoritarian giants simultaneously. In fact, there is a precedent in history regarding the USA’s approach towards the Communist bloc, which can help Biden realise that the USA must join forces with Russia against China.

So, how should Biden handle this situation? Well, prudence dictates that Biden needs Russian President Vladimir Putin to stop Chinese President Xi Jinping’s quest for global leadership. The sooner he realizes this, the better it is. After all, China is much more dangerous and antagonised to the United States of America, when compared to Russia. So, Biden needs to check Xi, not Putin. And there are a plethora of reasons why Putin might be willing to help Biden.

While forming a strategy around China and Russia, Biden must get rid of the misconception that China and Russia are the best of friends. Make no mistake, there is no real camaraderie between Russia and China. Beijing and Moscow admittedly share what they call a “strategic axis of convenience”.

The Sino-Russian relationship is based on expediency and convenience. Due to adverse geopolitical circumstances, Russia tolerates China and this relationship of convenience can be easily pierced. Take the example of former US President Richard Nixon and his Secretary of State Henry Kissinger, who had struck a bargain with China by exploiting the China-USSR rivalry, further marginalising the erstwhile USSR.

The Nixon-Kissinger policy of letting China do whatever it was up to, and cornering the erstwhile Soviet Union was partly successful. It was because of the ugly Sino-Soviet split that the US managed to cause the disintegration of the Soviet Union and actually win the Cold War. At that time, the Soviet Union was the bigger enemy of the United States and today China is the bigger enemy of the United States. So, prudence dictates that Biden must play the same game with China this time around.

Of course, it will not be possible for Biden to completely take eyes off what Russia is up to. However, all that Biden needs to do is downplay differences and disagreements with Russia, and also explored possible areas of cooperation between Washington and Moscow. To be fair, there are a plethora of areas in which the US and Russia can actually cooperate against China.

Biden needs to understand that Russia itself doesn’t trust China on several areas, in respect of which the US also has a problem with China. Take the case of the Arctic, which is melting quickly due to global warming and is expected to open up to shipping and exploration activity.

Both Russia and the US (Alaska) are geographically endowed with an enviable Arctic coastline. Therefore, Biden and Putin would want to make the most of the opportunities that are going to crop up in the Arctic. However, an expansionist China is staking claim over the Arctic and wants to build a Polar Silk Road in the region. Now, there is no reason why Putin would reject any offer by Biden to cooperate in the Arctic and exclude an outside power like China.

Similarly, Russia also has a problem with Chinese expansionism, just like the US. China stakes claim on the Russian Far East Capital Vladivostok, and if Biden can convince Putin, Russia might accept Washington’s Indo-Pacific vision.

The fact remains that if China keeps poking Russia in its Far East region, Russia will have no qualms in poking China in the South China Sea Region. In fact, Russia already shares strong defence ties with China’s enemies in the South China Sea. Biden only needs to push Putin towards more cooperation in the Indo-Pacific.

Also, Russia and the US acknowledge that they need to cooperate in the cybersecurity space. While Biden used to blame Russia for cyberattacks in the US, it is now being realised that China’s “hacker army” poses a substantial threat to both the US and Russia. Critical resources like Intellectual Propety, defence designs and vaccine information in the US and Russia are at threat of being stolen by Chinese hackers. For Biden, Moscow’s cooperation is indispensable if he wants to fight China’s cyber warfare.

Even Xi Jinping’s flagship Belt and Road Initiative (BRI) is a problem for both Putin and Biden. From an American perspective, the way China is using the debt trap strategy to expand its foothold across the world is absolutely unacceptable. And for Moscow, the BRI poses a challenge to Russia’s influence in its own backyard.

In fact, Russia may be a part of the BRI but it has hardly opened itself upto any BRI projects. Moscow did allow China to invest in many Russian sectors, after Putin’s fallout with the Western world in 2014, but these investments are largely outside the Belt and Road Initiative fold.

In fact, Russia seems annoyed by how China has been creating a network of BRI projects in Central Asia and Eastern Europe. Moscow regards Eurasia as its “privileged sphere of influence“, and therefore, Putin won’t be ready to accept Chinese BRI investments in Central Asia and Eastern Europe. In fact, there is no reason why Putin would play second fiddle to Xi in a region which Russia considers its own backyard.

Finally, Biden will need Putin’s assistance to identify China’s nuclear warheads and the level of arsenal that China has amassed. Since the 1970s, US and Soviet/ Russian leaders have negotiated a number of arms control agreements that limited and reduced the number of nuclear warheads of both countries. However, China never became a part of any nuclear arms control agreement with Russia or the US and has amassed a plethora of warheads that can pose a threat to the other two big powers- Russia and the US. Again, Biden will need Putin on the same table, if he wants to compel China into agreeing on reducing nuclear arms.

Presently, China is on the rise and Russia is insecure. Xi is continuously looking to make Russia China’s junior partner, which would be a bitter pill for Putin to swallow. This is the perfect opportunity for Biden to drive a wedge between Moscow and Beijing.

Someone in Biden’s team needs to let Biden know that China cannot be contained without Russia’s help and that it is in the common interest of both Moscow and Washington to join hands against Beijing.