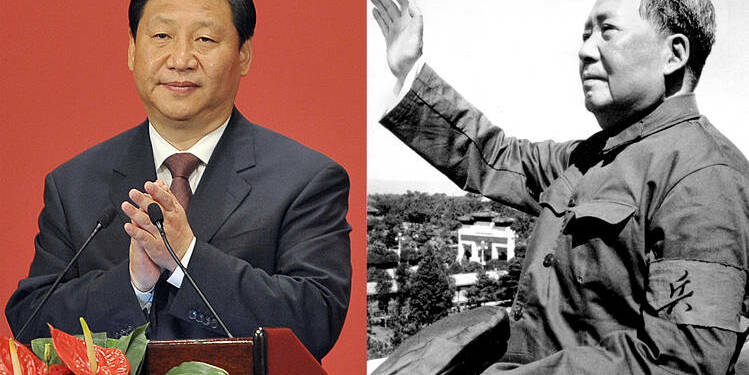 Mao Zedong is the architect of modern China. Although he’s dead, of late, the tyrant’s popularity has been rising in the country, especially as the people of China begin expressing discontent against Xi Jinping and his oppressive regime. Mao Zedong is becoming an icon for the Chinese youth, who are drawing inspiration from Mao Zedong, a mass murderer himself but for most in China, a revered communist deity, to stand up to Xi Jinping’s subjugation. But the current CCP General Secretary is no fan of Mao Zedong, and a recent event has stamped authority over the same. As a matter of fact, it seems Xi Jinping has conveyed a message to the Chinese populace – glorification of Mao Zedong is no longer fashionable or welcome in China.

Here’s what happened. The image of Communist China’s founding leader, Mao Zedong, made an unscheduled appearance at the Tokyo Olympics. After winning the women’s sprint in track cycling Monday, Bao Shanju and Zhong Tianshi wore pin badges of Mao. The gesture risks being judged a breach of Olympic Charter Rule 50, which prohibits political statements on the podium at the Games. The International Olympic Committee said Tuesday it is “looking into the matter.”

IOC spokesman Mark Adams was quoted as saying, “We have contacted the Chinese Olympic Committee, asked them for a report about the situation.” Meanwhile, one would have thought that the Chinese athletes wearing pin badges of Mao Zedong would be welcomed by the Xi Jinping-controlled CCP. Instead, Xi Jinping has cracked down on reportage of the incident, and is making sure that the wearing of pins with Mao’s face on them does not set a precedent and become the precursor to a pan-China trend.

Chinese nationalists are proud of the athletes for wearing Mao proudly on their shoulders. Chinese state media was proud and jubilant too – but only momentarily. Then, perhaps Xi Jinping came cracking down hard on them, because soon, all Chinese state media outlets deleted the reports of “Chairman Mao being honoured at the Tokyo Olympics” and edited footage pertaining to the incident where two athletes decided to flash Mao Zedong before the entire world.

The Chinese national newspaper Global Times celebrated the two cyclists’ gesture at first by posting a photo and writing “Look! Chairman Mao is on the chest of champions.” According to the Daily Beast, Global Times’ post soon grabbed the attention of the newspaper’s 30 million Weibo followers. It also caught the attention of Xi Jinping. The thrill among Chinese nationalists seems to have sent a shiver down the spine of the CCP General Secretary.

So, six hours and more than 10,000 likes later, Global Times deleted the post and took down a similar tweet it has on Twitter. Several official accounts also took down shared content related to the matter. Weibo’s host site – Sina delayed related posts from publishing on the platform. China’s national broadcaster CCTV also edited out the badges from the jackets of the two athletes during a replay of the medal ceremony. Now, Chinese nationalists are livid, and Xi Jinping is satisfied.

Read more: Xi Jinping tells the world about the biggest weakness of the Chinese Communist Party

Many might not know this fact but Xi Jinping’s family was among the many who were tormented by Mao Zedong during the Cultural Revolution and Great Leap Forward. When Xi was nine years old, his father, Xi Zhongxun, former head of the Communist Party’s propaganda division, was expelled by Chairman Mao because of his disloyalty. Until then, Xi had grown up a ‘princeling’ in ‘Zhongnanhai’, the enclave of influential Chinese Communist Party (CCP) leaders.

When Xi Jinping was fifteen, his father was sent to prison and Xi was one of the nearly thirty million ‘sent-down youth’ who were forced to work in the Chinese countryside for ‘re-education’ as part of Mao’s ‘Down to the Countryside’ movement. Therefore, Xi Jinping has faced the cruelty of Mao Zedong firsthand. As such, Chinese people now celebrating the man does not auger well with the Chinese president.

In the China of 2021, Xi Jinping is the tallest leader. The man does not consider himself to be lesser than, or equal to Mao Zedong. In fact, he considers himself much mightier than Mao. So, the people of China are allowed to have only one idol – and that is Xi Jinping, not Mao Zedong. Therefore, Xi Jinping is trying to curb the news and excitement of the Chinese athletes donning badges with Mao Zedong’s face on them.

To top it all, Xi Jinping does not want a man who brutalised his family to be glorified. Mao’s actions forced Jinping to undertake menial jobs. A prince was reduced to a pauper – all because of Mao Zedong. Therefore, Jinping is now reducing Mao’s memory in China. It’s pure and simple revenge at play here.