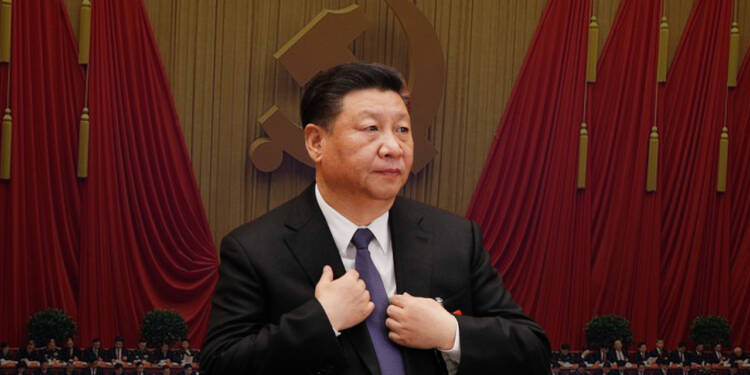 Chinese President Xi Jinping has just admitted his weakness. He has told the world that he and the Chinese Communist Party (CCP) do not possess loyal members and supporters, but only a large set of opportunistic members who have joined the party for personal gains. So, Xi Jinping, the President of China and General-Secretary of the CCP is going full Mao Zedong. He is trying to assert his authority over the CCP and compel loyalty towards himself.

As per a latest CNN report, Xi has demanded absolute loyalty from CCP members, by launching an ideology drive to ramp up their faith in the party and also by launching a crackdown on internal dissent. These are signs of sheer paranoia on the part of Xi Jinping, who has failed China and the CCP terribly. Now, Xi wants to nip any chances of a rebellion against him in the bud and this is why he is demanding greater loyalty.

Xi feels that many people are joining the CCP without any ideological motivation. They join the all-powerful party in China, only because their families want them to join the CCP or because they wanted a leg up in the Communist country’s highly competitive job market. Truth be told, these CCP members have no genuine belief in the party ideology.

The problem for CCP and its leader, Xi Jinping is that many of the party members are turning inactive. They lend weight to the numerical strength of the party but do not give it any substance. Also, there is a palpable fear that some disillusioned party members may fuel dissent within the CCP.

For Xi Jinping, loyalty to the CCP means loyalty to himself. Therefore, he is finding new ways to change the CCP. Xi doesn’t want party membership to remain mere means of advancement in public life.

So, the Chinese President is making new rules for CCP membership. We are talking about more meetings and volunteer work expectations. Those who want to join the CCP will now have to meet tougher requirements and demands of the party leadership.

However, from Xi’s perspective as a Chinese President with ambitions of becoming the greatest CCP leader since Mao, there are many reasons to be worried. Declining loyalty towards the CCP is interpreted by Xi as signs of rebellion against himself.

Especially over the past one year, Xi would have realised that the declining loyalty towards the CCP is a direct consequence of his own pathetic failures. He is getting even more paranoid because he is the one failing China in terms of handling the Coronavirus Pandemic, controlling food shortages, rescuing flood victims in Chinese villages and improving China’s global image.

And then every single one of China’s woes can be attributed to Xi’s lack of foresight and terrible decisions making. Whether it is the relentless crackdown on the tech giants that has plummeted Chinese stock markets or the unnecessary trade wars with Australia which have mounted trouble on China’s steel mills, power sector and infrastructure sector, Xi is to be blamed for all of China’s troubles.

Moreover, dissatisfaction is bound to grow in China over how the President of the country has single-handedly made a pariah out of the second-largest economy in the world. The trade sector too is facing a lot of trouble with jammed ports and geopolitical tussles between China and the free world.

Xi also understands that within the CCP, there are groups like the “Shanghai faction,” which consists of people close to former President Jiang Zemin. This faction supported powerful business tycoons and tech innovators like Alibaba founder Jack Ma, and therefore, carries a lot of influence within the party. Also, Xi’s crackdowns against the tech sector imply that he can face more opposition within the CCP. This is why he wants to discipline his party members.

For Xi, commanding loyalty is therefore more of a compulsion than choice. He is desperate to assert strengthen and consolidate power. Recently, Xi went as far as visiting Tibet for the first time after taking over as the Chinese President. The visit was actually a show of strength by Xi Jinping in an attempt to salvage his own image.

Xi visited Nyingchi, a strategically located border town close to the Indian state of Arunachal Pradesh. The visit was preceded by Indian Prime Minister Narendra Modi and his ministers publicly wishing the Dalai Lama a happy birthday. The 14th Dalai Lama – who has taken refuge in India is considered a ‘separatist’ by China. This was as much a message to the people of China, as it was to the rest of the world. Xi wants China and the CCP to know that he is their leader and that he can quell any rebellion against himself.

However, in trying to discipline his party members, Xi has committed the cardinal mistake of letting his enemies inside and outside China know that his party is not a united force but a divided house. And that the absolute supremacy of Jinping is a manufactured illusion and like most China made things would not last long.