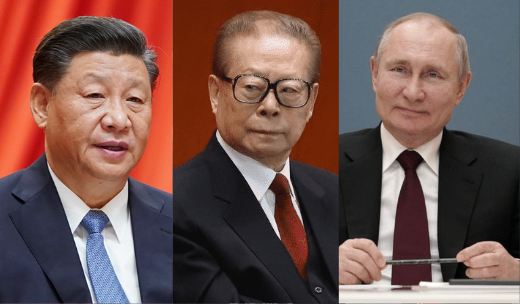 The cracks in the Sino-Russian relationship are slowly getting exposed. And to make the bilateral relationship even more tense, Russian President Vladimir Putin is hobnobbing with his Chinese counterpart’s biggest foes- the “Shanghai faction” and Alibaba founder Jack Ma. In a recent videoconference between the Russian Geographical Society and Putin, Alibaba founder Jack Ma was also spotted. The Alibaba founder did not speak but he marked his presence, as he is on the group’s board of trustees.

Ma’s presence was however an extraordinary event, as the star billionaire hasn’t appeared frequently in public after Chinese authorities cracked down on him and his ventures since October last year. So, why did Ma appear in a meeting with Putin and what is the role of the “Shanghai faction” in the entire development?

Ma’s appearance in a meeting with Putin is a hint of how Alibaba founder’s interests in Russia have remained unscathed. And this isn’t really a matter of surprise. After all, Ma enjoys strong ties with “princelings”, the children of CCP leaders and “second-generation reds”, a smaller group of elitist Chinese children whose parents joined the revolution preceding the establishment of the People’s Republic of China (PRC) 1949.

China’s President Xi Jinping is himself a second-generation red. But Xi and Ma are separated by the latter’s particularly strong connections to the “Shanghai faction.”

The ‘Shanghai faction” is basically a group of people considered close to former President Jiang Zemin. This faction supported Alibaba’s rapid growth before Xi Jinping took charge of affairs. The Xi era has however been different. The problem for Ma is that the sitting Chinese President considers the “Shanghai faction” a political challenge and many top officials purged by the Jinping administration have been Zemin supporters.

One of the key reasons behind Xi’s onslaught against Ma’s Ant venture is believed to be the fact that people close to princelings have significant Ant shareholdings.

So, where do Russia and Putin come into the picture? As for Putin, he has always been close to the “Shanghai faction“.

In 2014, Putin visited Shanghai and met Jiang Zemin. The meeting had then come into media glare and SCMP had even reported, “Jiang Zemin keen to use Putin meeting in Shanghai to show he still has what it takes.”

More than what Zemin wanted to show, we are concerned about what Putin wanted to do. The meeting showed that Putin was ready to let the “Shanghai faction” show some sense of authority, even though Xi had already assumed office as China’s President. Moreover, Putin and Zemin were labelled ‘old friends’ after the meeting.

The Shanghai faction was known as the “machine-building industry faction” in its heydays. Many Chinese businesses grew and prospered under the shadow of the Shanghai faction. Also, the Shanghai faction controls resource groups and is believed to have an influence over China’s gas agreement with Russia, apart from resource development in the waters near the disputed Paracel Islands in the South China Sea.

From a very political point of view, the “Shanghai faction” works as a tool for the Russian President. He can keep the Jinping administration on its toes by hobnobbing with the financially prosperous faction in the CCP. Ma’s presence in the videoconference with Putin also serves as a signal for Jinping.

Alibaba’s investments in Russia worth over $100 million are perhaps an extension of the close ties between the Putin administration and the “Shanghai faction”.

Moscow has its own interests to pursue in the Arctic, Central Asia and even the Indo-Pacific. The Russo-Chinese relationship is supposed to grow tense once both Beijing and Moscow pursue their interests aggressively and bluntly. Putin however is ready to keep China on the track through his special relationship with the “Shanghai faction”.