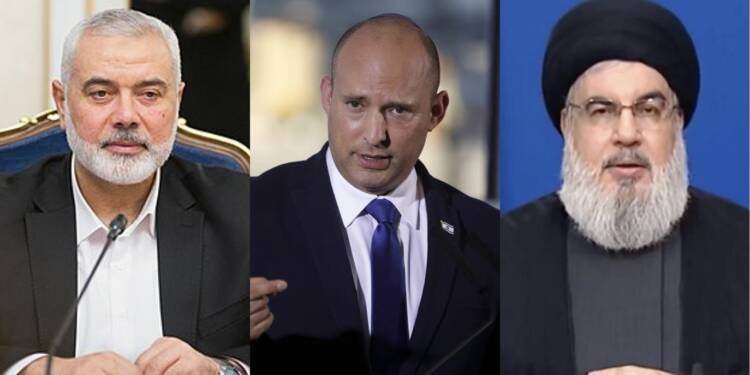 Hezbollah, the Iranian backed terrorist organization is grappling with a plummeting support among the Lebanese. Given the vehement political and economic crisis that has taken a massive toll upon the poor Lebanese, the people are taking it upon themselves to free their country from the clutches of Islamic terrorism.

Fearing an imminent backlash from the infuriated swathes of the Lebanese population, Hezbollah is taking a leaf out of Hamas’ playbook to stay afloat in the country’s highly volatile political scenario. It has resorted to attacking Israel in its bid to fan anti-Israel sentiments among the Lebanese population and help its plummeting popularity; much like Hamas’ 11-day war against Israel that rendered it extremely popular among the sulking Gazans.

On Friday, Hezbollah fired barrages of rockets towards Israel, drawing retaliatory fire from Israel into south Lebanon on the third day of cross-border salvoes. The salvoes began on Wednesday with a rocket strike on Israel from Lebanon.

Read More: Hamas leader killed Hundreds of Gazans just to secure another term as the chief of the terrorist outfit

The same day, Hezbollah affiliated al-Manar television channel documented the firing of 19 rockets in the direction of the Israeli border and the Golan Heights. Hezbollah proudly claimed the responsibility for the rocket attacks and tried to project itself as the sole saviour of the poor Lebanese against an extremely ‘assertive’ Israel.

The rockets failed to inflict any major damage to the Israeli assets, nor did Hezbollah intend to do so. The fact that all these attacks were carried out just to grab eyeballs proves that Hezbollah carefully orchestrated this move only to leg up its diminishing popularity. The video footages of the attack on Israel were vigorously propagated only to showcase Hezbollah’s valour on the battlefield.

Much like Hamas, Hezbollah uses civilian and residential areas to launch attacks against Israel, so that when the Jewish nation responds, it ends up hurting and killing Lebanese civilians. This was carefully orchestrated to project Israel as the villain among the commoners and fan nationalistic sentiments among them. However, it seems that poor Lebanese have had enough of Hezbollah’s menace.

Read More: A fierce retaliation from Israel begins a chain of attacks against Hezbollah by locals in Lebanon

Israel and the people of Lebanon are well aware of such tactics. So, in Southern Lebanon’s Druze village on Friday, the civilians stopped Hezbollah and its extremists from attacking Israel using rockets. The Hezbollah operatives were beaten and dragged across the road for putting the lives of Lebanese people at risk. One of the comments made by an ordinary Lebanese civilian was, “Locals taking out the trash!” The trash, of course, was Hezbollah.

Attacking Israel and thus boosting its political support back at home is a tried and tested formula for the militant organizations like Hamas and Hezbollah. Earlier this year, the end of the 11-day war between Hamas and Israel witnessed a whopping increase in Hamas’ popularity. A survey by the Palestinian Centre for Policy and Survey Research post the 11-day war showed that Hamas’ chief Ismail Haniyeh’s approval ratings had skyrocketed to 47 percent compared with 46 percent for President Mahmoud Abbas of the rival secular Fatah faction.

Haniyeh’s popularity in Gaza before the 11-day war was simply piteous. Hamas had lost a lot of its popularity as it infuriated people due to its lack of governance and some people see it as the reason for the Israeli-Egyptian siege and the international boycott which resulted in high rates of unemployment and poverty as well as lack of many essential services due to the severe shortages of basic necessities and funds.

The iniquitous war with Israel brought much-needed respite to Hamas and its leader Ismail Haniyeh, who successfully clinched another term as Hamas’ chief last Monday. What Hezbollah is doing in Lebanon is the exact same thing. It is pinning all of its hope on the intuition that attacking Israel will help its plummeting support among the Lebanese. However, much of its bravado against Israel could very well prove to be a damp squib for Hezbollah as the Lebanese people storm the streets to beat the living daylights out of the terrorist organization.