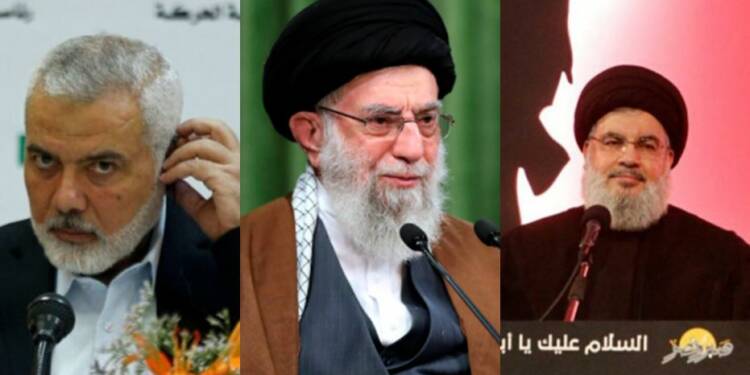 If one notices with a keen eye, it would not be extremely difficult to see a pattern emerging in the Middle East. This pattern involves the Shi’ite nation of Iran and its proxy militia groups – Hezbollah in Lebanon and Hamas in Gaza. Iran, Hezbollah and Hamas are all at their lowest. They are weak, devoid of any enthusiasm, and bankrupt. Furthermore, all three of them are losing the support of the masses. Iranians are taking to the streets against the Islamist regime of Tehran in large numbers. The Lebanese are dragging Hezbollah extremists by their collars across streets. In Gaza, the population is so impoverished that Hamas is ruling over it only by the power of their guns.

At a time when Iran’s economy is in the doldrums, no nuclear deal is in sight, the people are rising against the Ayatollah’s regime and Israel is on the brink of launching an unprecedented offensive against it, Tehran will be forced to rethink support for Hezbollah and Hamas. Iran has been the patron and financer of these terror organisations, and has helped them spread violence against Israel and its people for a long time. Now, however, it is bankrupt and its ability to finance and support these proxy groups is increasingly waning.

The people of Iran are rising up against the regime. During the recent Khuzestan mass protests in Iran, one of the main slogans of the demonstrators was, “No Gaza, No Lebanon, my life for Iran.” This shows the level of frustration among ordinary Iranians, who do not have essential commodities, electricity and water, all at a time when their country’s regime is pumping money abroad, into the pockets of Hamas and Hezbollah for the fight against Israel. So, now that there is a growing consciousness among Iranians over how their money is being sent to proxy militia groups across the Middle East while they continue to suffer, the mullah regime of Tehran will be forced to rethink its support for Hamas and Hezbollah.

Iran also has sufficient cause to stop supporting Hezbollah. The people of Lebanon are increasingly getting tired of the organisation. On Friday, Hezbollah fired barrages of rockets towards Israel, drawing retaliatory fire from Israel into south Lebanon, in a third day of cross-border salvoes. The salvoes began on Wednesday with a rocket strike on Israel from Lebanon. Interestingly, Hezbollah uses civilian and residential areas to launch attacks against Israel, so that when the Jewish nation responds, it ends up hurting and killing Lebanese civilians.

Israel, and the people of Lebanon are well aware of such tactics. So, in Southern Lebanon’s Druze village, the civilians stopped Hezbollah and its extremists from attacking Israel using rockets. The Hezbollah operatives were beaten and dragged across roads for putting the lives of Lebanese people at risk. One of the comments made by an ordinary Lebanese civilian was, “Locals taking out the trash!” The trash, of course, is Hezbollah.

More footage of of villagers in southern Lebanon seizing the convoy of #Iran-backed Hezbollah and confronting the operatives.pic.twitter.com/goUNkv7wtv

More footage of the Druze villagers, said to be near Hasbaiyya, confronting #Iran-backed Hezbollah members.@AuroraIntel: Appears to be a 122mm MRLS, which aligns with the Hezbollah statement of "dozens of 122m rockets."pic.twitter.com/eakyKlKSMM

Hezbollah is fast losing support in Lebanon. Furthermore, France and Israel are breathing fire down its neck. TFI had explained a while ago how France seems to be rooting for military rule in Lebanon, in order to free the crisis-struck country from the Hezbollah-backed government. Israel, meanwhile, is looking to win over the Lebanese people, by offering them humanitarian aid at a time when the country is facing its worst economic crisis.

Hamas is suffering from plenty of problems itself. Its fate rests solely in the hands of Israel, and most recently, Qatari money has not been flowing into Gaza freely. According to the Jerusalem Post, payment of Hamas salaries has delayed the resumption of Qatari funding for the Gaza strip. Prior to the 11-day Gaza war in May, Israel allowed Qatar to make regular $30 million cash payments to Gaza, which had gone to needy families and salaries of Hamas’ civilian officials. Qatar also paid for fuel for the strip’s power plant.

Israel has demonstrated to Hamas that even though Iran might be its patron, the organisation’s fate, and that of Gaza too, resides squarely in the hands of the Jewish nation. Iran’s investments in such proxy militia groups are bearing no results. Instead, they are becoming a source of financial drainage and international shame. The world community is turning against Iran for its support of anti-Jewish forces. Iran is on the brink of collapse, and now would be the right time to rethink support for organisations like Hamas and Hezbollah.