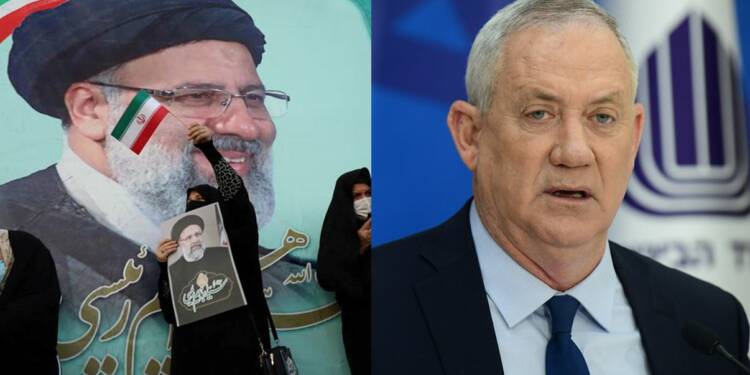 Tensions are at an all-time high in the Middle East. With the “Butcher of Tehran” – Ebrahim Raisi now firmly in office as the Shi’ite nation’s president, hostilities are rising in the region at an unprecedented pace. Iran has stepped up activity across the Middle East. Its militias are enthusiastic with the change of guard in Tehran, while Israel and the Arab world led by Saudi Arabia are equally concerned. Israel, however, faces an immediate existential threat from Iran, especially now that an ultraconservative like Ebrahim Raisi has risen to power. Therefore, Tel Aviv has given up on all pleasantries and is directly warning Iran against any misadventures.

On Thursday, the same day when Raisi was sworn in, Israel’s defense minister Benny Gantz issued a stern warning to Tehran. Speaking to Ynet, Gantz was asked if Jerusalem was ready to strike Tehran, to which he answered in the affirmative, saying that the Islamic Republic was a threat to the country, Middle East and the entire world. Gantz added, “Iran seeks to pose a multi-front challenge to Israel and is building up its forces in Lebanon and Gaza, deploying militias in Syria and Iraq and maintaining its supporters in Yemen. Iran is a global and regional problem and a challenge to Israel.”

The Israeli defense minister also remarked that Israel must continue to develop its abilities to cope with threats on multiple fronts, as this was in the country’s future. What is even more worrying for the Jewish nation is the fact that as per its own intelligence, Iran is only around 10 weeks from acquiring weapons-grade materials necessary for a nuclear weapon. So, Gantz said, “Now is the time for deeds – words are not enough. It is time for diplomatic, economic, and even military deeds – otherwise the attacks will continue.”

Read more: As Iran gets closer to being a nuclear nation, Israel prepares for an attack on Iran’s nuclear sites

Israel’s stand on Iran is, therefore, abundantly clear. The Jewish nation is in no mood to even appear conciliatory towards Iran. Iran is proving to be a threat for Israel which must be immediately neutralised, using military means if necessary. This renewed vigour on the party of Israel to deal with the Iranian threat all by its own if required is bound to raise temperatures in the Middle East, which could very well spiral into a full-blown conflict.

The nuclear deal revival talks which were being held in Vienna between the West and Iran are currently stalled. The Ebrahim Raisi government is in no mood to resuscitate the Joint Comprehensive Plan of Action. Instead, by stalling the negotiations rather indefinitely, Tehran is narrowing its breakout time – which means that the Shi’ite nation is getting closer to a dirty bomb with every passing day. Israel knows this very well, and soon, there might be a point where Iran might just surprise the world

Furthermore, Iran is doing itself no favours by mounting attacks on foreign shipping vessels. The U.S., Israel and UK, are said to be jointly deliberating on an appropriate response to Iran after the suicide drone attack on Mercer Street, a Liberian-flagged, Japanese-owned petroleum product tanker managed by Israeli-owned Zodiac Maritime. The attack had led to at least two deaths. The democratic world is now livid at Iran.

The Arab world led by Saudi Arabia, meanwhile, is no fan of Iran. The Shi’ite nation is pursuing its violent geopolitical goals across the Middle East using proxy militias, which are a direct threat to the Sunni Muslim world. In Yemen, Iran is waging a war against Saudi Arabia and getting critical assets of Riyadh attacked by the Houthis. Therefore, when push comes to shove and Israel decides to take matters decisively in its own hands, the Arab world would not be holding it back from launching an offensive against Iran.

A full-blown conflict between Israel and Iran would be difficult for Tehran to sustain. Domestically, Iran is at its lowest. Its economy is in the doldrums and the Iranian people are turning against the Islamist regime. If Israel decides to teach Iran a lesson, it would be extremely unlikely that the mullah regime of Iran would survive.