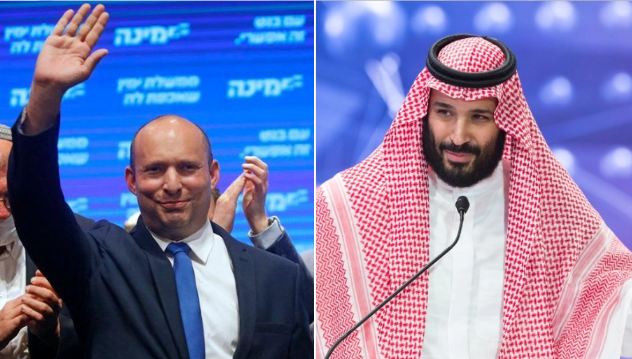 Saudi Arabia has always wanted to normalize ties with Israel. It wanted to do so last year itself when President Donald Trump first brokered peace agreements between Israel and various Arab states. However, due to a multiplicity of factors, it could not. President Donald Trump is gone – but his Israel and Middle East policy is being followed in toto by the Biden administration – even if secretly and complemented with the usual Democrat war mongering. The same was witnessed during the 11-day Israel-Hamas war, where Joe Biden went out of his way to support the Jewish nation.

As reported by TFI, the Biden administration is now looking to carry forward the ‘Abraham Accord’ legacy of Donald Trump, and is said to be in silent discussion with multiple Arab states to normalize ties with Israel. Saudi Arabia is one of these states – with the only difference being that Riyadh does not require any convincing by the United States. The Abraham Accords have the approval of Saudi Arabia since the very beginning, and it is only a matter of time before the leader of the Arab world signs the historic accord.

Saudi Arabia has been posturing very strategically, in order to let the concerned parties know it is keen to normalize ties with Israel. In a historic step, the United Arab Emirates – which was the first Arab state to sign the Abraham Accords, opened its embassy in Israel on Wednesday. The UAE also became the first Gulf state to open an embassy in Israel, as its envoy hailed the trade and investment opportunities that closer ties would bring at a flag-raising ceremony also attended by Israel’s president. The Emirati embassy’s inauguration came weeks after Israel Foreign Minister Yair Lapid cut the ribbon on its embassy in Abu Dhabi.

The inauguration of the UAE’s embassy in Israel was given prominent coverage by Arab News – which is a Saudi Arabia based major English news publication. At least as of May 2019, Arab News was owned by Prince Turki bin Salman Al Saud, the brother of the ruling Crown Prince of Saudi Arabia Mohamad bin Salman. The newspaper has been described as “a mouthpiece for the Saudi regime” and “regarded as reflecting the official position” of the Saudi royal family and government.

In Saudi Arabia's @arabnews. "The opening of the UAE embassy in Tel Aviv is an important milestone in our joint journey toward a future of peace, prosperity and security for the Middle East.” – Israeli President Isaac Herzog @Isaac_Herzog. pic.twitter.com/cMSWhIE6Vo

Oman had recently stated that it would not be normalising ties with Israel. This had surprised many, as Oman is generally seen as a moderate Arab nation. Oman has always played the role of a facilitator in the region. However, Saudi Arabia has been pushing Oman to normalise ties with Israel. There is no reason why Oman should not normalise ties with Israel, when Riyadh is itself in favour of the same. In a rare visit to Saudi Arabia, the leader of Oman signed a Memorandum of understanding to establish a joint coordination council that aims to coordinate the two countries’ stances in all fields. Relations between Oman and Saudi Arabia had long been cold despite their shared border. A closer relationship could be an economic boon for Oman, which is struggling to diversify its economy away from oil.

However, Oman will have to return the favour by normalising its ties with Israel. Economic dividends are more than sufficient reason for Oman to sign the Abraham Accord. Meanwhile, latest developments would have boosted the Sultan of Oman’s confidence, which would make it easier for him to decide in favour of normalising ties with Israel.

Most importantly, we now come to Jordan. According to reports, Jordan is the closest to signing the Abraham Accord with Israel. Last week, Jordan’s King Abdullah and Israel’s newly sworn President Isaac Herzog spoke over the phone. The two leaders agreed to strengthen ties in the areas of economics and tourism. Recently, Israel’s Prime Minister Naftali Bennett and King Abdullah secretly met in Amman, where Israel struck a deal to sell Jordan an additional 50 million cubic metres of water this year, and allow Jordanian imports to the West Bank to go up from $160 million last year to about $700 million. This was followed by a public meeting between Israel’s foreign minister Yair Lapid and his Jordanian counterpart Ayman Safadi last Thursday.

Importantly, according to a report by the Middle East Monitor, Jordan will finalise a normalisation of relations with Israel during an upcoming visit by Jordan’s King Abdullah II to Washington. The Biden administration seems to have convinced that it would be in the best interest of Jordan to normalise ties with Israel. It is worthy to be mentioned here that Jordan was the main reason why Saudi Arabia did not sign the Abraham Accord with Israel last year itself.

A recent Washington Post report revealed how Trump’s dream to unite American allies- Israel and Saudi Arabia under his ‘deal of the century’, could never materialise because Jordan’s King Abdullah II did not bend on the issue of making concessions on the status of Jerusalem and other Palestine-related issues. When Trump made an attempt to bring Israel and the Arab countries closer and ties, Jordan’s King Abdullah II started weaponising Islamic sentiments over Jerusalem. The Hashemites felt that any agreement between Saudi Arabia and Israel over Jerusalem could erode Jordan’s control over the Al-Aqsa Mosque compound, which is the third holiest site of Islam.

Such remarks made it very uncomfortable for Saudi Arabia to sign an Abraham Accord, even though MBS indirectly supported the Arab-Israeli peace process last year. How could Saudi Arabia, the undisputed leader of the Muslim world, publicly embrace Israel while Jordan grew vocal about Jerusalem? It would have made MBS look bad.

Now that Jordan is all set to normalize ties with Israel, Saudi Arabia can breathe a sigh of relief. Meanwhile, a Saudi-backed venture firm – SoftBank has become the second investment giant to open an office in Israel within the past three months. SoftBank is seen as the world’s leading technology fund, having invested huge sums into companies such as Uber, Alibaba and TikTok. The Saudi-backed venture has appointed ex-Mossad chief Yossi Cohen to head up its new office in Israel.

The indications are clear – the Abraham Accords are soon about to receive a big impetus, as major Arab states – including Saudi Arabia are about to normalize bilateral ties with Israel.