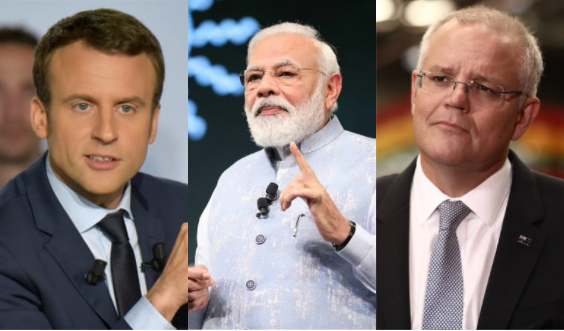 The three M’s which China and its despotic leader, Xi Jinping fear the most are coming together. Modi, Macron and Morrison are all set to form a trilateral for India, France and Australia in order to counter the Chinese threat posed across the Indo Pacific. What was for so long a secretary, or at the most, a foreign ministerial level platform has now been elevated to include the leaders of India, France and Australia. Therefore, Indian Prime Minister Narendra Modi, French President Emmanuel Macron and Australian Prime Minister Scott Morrison are slated to meet soon to further strengthen the trilateral setup.

The high-level meet of the three leaders is likely to happen on the sidelines of any major multilateral summit. G20 summit in Italy this October could provide an opportunity for the meet. According to WION, the development comes almost a year after the group first met at the secretary level. The France, India and Australia trilateral was launched in September 2020 at the foreign secretaries’ level with three joint priorities, maritime security, environment and multilateralism.

With a focus on maritime security, the trilateral is slated to become among the leading bodies which will counter Chinese aggression across the Indo Pacific. Modi, Macron and Morrison are all China hawks, and for them to come together to maintain maritime security in the Indo Pacific is a big deal. China is a wanton violator of maritime laws as it harasses smaller nations in the region with the aim of gobbling their territories and waters.

Read more: India turns UNSC into a centre stage for back-to-back embarrassments for Pakistan and China in its first week of presidency

In May this year, the foreign ministers of the three nations had met at the sidelines of the G7 foreign ministers’ meeting. During the meeting, India, France and Australia committed to advancing their shared values and working together to achieve a free, open, inclusive and rules-based Indo-Pacific. The Ministers reaffirmed their support for the rule of law, freedom of navigation and overflight, peaceful resolution of disputes, democratic values, and respect for sovereignty and territorial integrity.

The foreign minister’s meet had set the tone for what the trilateral will look like in the future. The Indian, French and Australian foreign ministers had reiterated their commitment to ASEAN’s centrality and their support for ASEAN’s Outlook on the Indo-Pacific. Additionally, the three countries promised to work together with a range of partners to promote the rules-based maritime order based on respect for sovereignty and international law. They affirmed the centrality of the UN Convention on the Law of the Sea (UNCLOS) and that UNCLOS provides the legal framework for all activities in the oceans and seas.

The trilateral setup has never made a secret of the fact that its primary mandate is to take on China and protect nations that cannot protect themselves. So, in a direct challenge to China, the three countries had recognized that Illegal Unreported and Unregulated (IUU) fishing is a trans-boundary and transnational problem that affects the biological sustainability of relevant fish stocks and impacts the livelihoods of fishers, especially small-scale fishers and coastal communities in developing countries and Small Island Developing States.

The biggest IUU fisher in the world is China. The Chinese have an unnaturally voracious appetite for fish and marine life. Therefore, to satiate its needs, China fishes not just along its own coastlines or even just in the South China Sea. In fact, Beijing has an illegal fishing racket running in seas across the world. From Latin America to the Indian Ocean to the Atlantic and Pacific Oceans – China has its fishing fleets stealing fish from other countries all over. While Beijing officially acknowledges a distant-waters fishing fleet of 2,500 vessels, independent researchers estimate it could be as large as 17,000 vessels.

India and France, meanwhile, have also begun work on a space alliance. The two countries are soon set to launch Space Security Dialogue at the heart of which is protecting space assets like satellites.

For a trilateral between these countries to be elevated to the leaders’ level shows the importance which India, France and Australia attach towards the threat posed by China. France is infuriated with Chinese plans to undercut its influence in the Pacific, especially in its island territories of the region, like in New Caledonia. Australia has been fighting a trade war with Australia for over a year now and is also kicking Chinese interests out of the country. When it comes to India, China has been poking it along the Himalayas. India is the only country in the world that has most recently dealt physical blows with China, and as such, it is a natural ally of all major powers who seek to challenge China.

For the India-France-Australia trilateral to be elevated to the leaders’ level is a serious challenge to China’s evil designs. Xi Jinping was already worried about the growing naval presence of the free world in the South China Sea. Now, apart from the Quad, he will also have to steer clear of the triad between India, Australia and France.