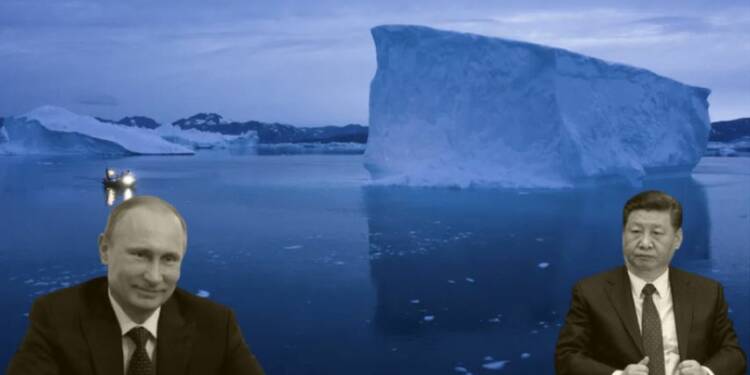 IUU fishing – the term stands for illegal, unreported and unregulated fishing. The biggest IUU fisher of the world is China. The Chinese have an unnaturally voracious appetite for fish and marine life. Therefore, to satiate its needs, China fishes not just along its own coastlines or even just in the South China Sea. In fact, Beijing has an illegal fishing racket running in seas across the world. From Latin America to the Indian Ocean to the Atlantic and Pacific Oceans – China has its fishing fleets stealing fishes from other countries all over. While Beijing officially acknowledges a distant-waters fishing fleet of 2,500 vessels, independent researchers estimate it could be as large as 17,000 vessels.

China is on the constant lookout for new avenues of fishing. The Arctic is one such region which China wishes to exploit for its marine life. China likes to call itself a near Arctic state. That China is as far away from the Arctic as Poland is a separate matter altogether. Nevertheless, China considers itself to be a major player in the Arctic, and expects to be involved in all major decisions taken by the world community for the melting region. With the polar ice cap melting, the Arctic is being thrown open to a multitude of possibilities – ranging from trade, tourism, gas and oil exploration and of course, fisheries.

Therefore, China has been included in a major intergovernmental setup which will deliberate and work out the various fishing quotas for countries interested in the Arctic. According to Nikkei Asia, the U.S., China, Japan and Russia are among the countries planning to conduct joint research on fishing in the Arctic Ocean in a step toward setting forth international rules. The joint research aims to track the types of fish in the Arctic and their current catch levels. If a fish stock is deemed sufficient, a rule will be issued to allow commercial fishing within set quotas.

The aim of the member states is to promote “sustainable fishing”. Representatives from nine countries and the European Union are planning to meet in South Korea early next year to discuss fishing quotas based on similar treaties covering other regions. The Nikkei Asia report also stated that the countries’ efforts are based on an international agreement to ban unregulated fishing in the Arctic that went into force in June.

Make no mistake, as the country which shares the largest border with the Arctic, Russia is the undisputed king of the region. Without Russia’s approval, no such intergovernmental body would have been able to set foot in the Arctic. Since China calls itself a “near Arctic state”, when Russia must have got China onboard with the intergovernmental bloc, it must have been an ego issue for Beijing. As a proclaimed “near Arctic state”, it cannot decline participation in the deliberations of fishing rights and quotas which are to come into effect in the near future. If it did decline, the world community would realise that Chinese assertions of being a “near Arctic state” are empty rhetoric, and nobody would consult the country regarding Arctic-related issues in the future.

So, Russian President Vladimir Putin really laid out an unavoidable trap for China. Now, as a member of the Arctic Fishing bloc – of which Russia, the United States, South Korea, Canada and other nations are all members, China will have to adhere to the fishing quota and regulations set by the collective group, failing which Beijing will antagonise Russia severely – something which it cannot afford.

Therefore, China is walking into a death trap – willingly so, because the trap laid by Putin is just too perfect to be evaded. The biggest IUU fishing entity in the world will now be forced to follow rules in the Arctic. This is some grand strategizing by Putin at play right here.

Read more: The polar wars of China: Challenging Russia in the Arctic and Australia in Antarctica

Vladimir Putin knows what China is up to in the Antarctic. While the rest of the world was cutting down on Antarctic research due to the Coronavirus Pandemic, Chinese company- Shanghai Chonghe Marine Industry was acquiring the largest Antarctic krill-fishing boat to be completed by the year 2023. Krill, a tiny crustacean crucial to the Antarctic ecosystem as it forms a diet of several creatures in the region is already in danger due to increasing global demand. And now, Beijing wants more of it because Krill is used as oil and feed in China. China can irreparably hurt the Antarctic ecosystem through overfishing.

Russia will not allow China to have its way in the Arctic, and therefore, to neutralise the Chinese threat, Putin laid out a trap for Xi Jinping, in which the despot walked right in. Now, Putin is making China write its own suicide letter.

With record donations, Trump has achieved a feat no former US president ever has