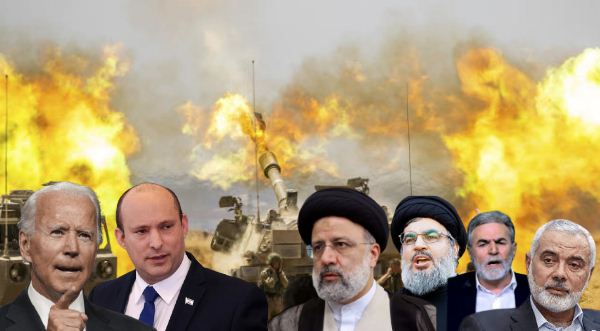 The tensions between Iran and Israel are running hot amid Iran’s escalation in the Persian Gulf and Hezbollah’s aggressive posture in Lebanon. Israeli defense minister Benny Gantz, last week threatened that Israel was ready to strike Iran, saying that Iran has become a grave threat to the stability in the Middle East region. CIA Chief Bill Burns rushed to Israel amid reports that the USA is mulling “alternative ways” to get Iran to stop advancing its nuclear program. Long story short, Israel could very well launch a military operation against Iran with tacit approval from the United States of America.

Taking on Israel with its extremely limited sources could even cause Iran to cease to exist and thus, it has resorted to preparing for a three-front war scenario with Israel if the two countries go to war in coming times. In an interesting development, Palestinian Islamic Jihad (PIJ) chief, Ziyad Al-Nakhala, on Monday said that “Palestinian fighters are ready for a new battle with the Zionist occupation in defence of Jerusalem.”

Read More: Enough is enough! Iraq has finally turned its guns towards the unholy Iran-China nexus

Nakhala’s recent remarks came during his meeting with the Chief of Iran’s Revolutionary Guards, Brigadier General Hussein Salami, in Tehran. He said, “The force balance is changing in favour of the Palestinian resistance and the result of building up local force in the occupied territories left the Zionists in a permanent state of worry and tension.” The Islamic Jihad Delegation is in Tehran since the last week and had also attended Ebrahim Raisi’s swearing-in ceremony.

It is abundantly clear that Iran largely relies on its proxies to further its geopolitical interests in the region, and it is working out a strategy to deploy PIJ in its bid to deter Israel’s offensive moves against the Iranian regime and Iran’s nuclear ambitions.

Apart from Hamas, Iran had established its relations with the PIJ in the 1980s. Since 2006, Tehran has increasingly focused on supplying the Islamic Jihad with various types of rockets, including Fajr 3 and Fajr 5 rockets as well as M302s, originally made in Syria. “Instead of giving them a fish or teaching them to catch a fish, we taught our allies and friends how to make a hook, and they are now in possession of missile capabilities and technologies,” General Amir Ali Hajizadeh, the commander of the IRGC Aerospace Force, said during an interview in January 2021

Just like Hamas and PIJ in Gaza, Iran also maintains extremely close ties with Hezbollah in Lebanon, another terrorist organization that is driven by its constant hate for the Jewish state. Hezbollah and Israel are yet to relapse into a full-blown war, but the two sides have sporadically exchanged severe tensions over the last decade. The periodic conflict between Hezbollah and Israeli forces escalated into a month-long war in 2006, during which Hezbollah launched thousands of rockets into Israeli territory.

Hezbollah recently launched an offensive against Israel from the Lebanese soil that prompted Israel to carry out strikes in Lebanon for the first time since 2014. The head of Lebanon’s powerful Hezbollah movement, Hassan Nasrallah, on Saturday vowed a “suitable and proportionate” response to any Israeli airstrikes on Lebanon after the flare-up.

The fact that both, the PIJ and Hezbollah, are vowing to go all guns blazing after Israel at the time when Israel could be preparing for a military offensive against Iran, speaks vehemently for the fact that these two are upping the ante at the behest of Iran. Iran is striving to flare up tensions between Israel and Iranian proxies in Lebanon and Gaza to delay, if not prevent, what could be Israel’s decisive war against the theocracy in Iran.

Read More: It’s almost official – Israel and the US are preparing for a war against Iran

The tensions between Israel and Gaza, and Israel and Lebanon would help Iran buy more time in advancing its nuclear development and its highly ambitious missile program. In recent months, Iran has continued to enrich uranium to 60%, develop uranium metal and block International Atomic Energy Agency access to nuclear sites.

The US and European officials are worried that Iran’s violations of the JCPOA agreements would become so advanced that they could even render the JCPOA completely useless altogether. The Israeli side says that Iran has already breached the threshold and only hard measures should be deployed to tackle the Iranian menace.

Hence, relying upon its proxies to further embroil Israel in the regional conflicts seems the only way for Iran that could deter Israel’s full-blown war against Iran in the months to come. It has, for long, nurtured its proxies in the region to notch up its interests over there, and now the time has come for Iran to bring those militias into play. With Hezbollah in Lebanon and the PIJ in Gaza, Iran could be preparing for a three-front war with Israel to outlive the major crisis in making.

However, much to Iran’s dismay, even a three-front war against the Jewish state could prove short of a breakthrough for the Iranian regime. Given the fact, that the US could have given Israel its tacit approval for the offensive against Iran, would make it difficult for Iran to earn significant support among the international community.

Iran is already reeling under a severe water crisis and its Southwestern province of Khuzestan is being stormed by the Arab secessionist forces.

Israel, in the past few months, has forged greater ties with the Arab states and thus, Israel could very well enjoy their support in any event of a military clash between Israel and Iran.

Also, Hezbollah in Lebanon is continuously losing its popular support among the Lebanese people. Last week, when Hezbollah decided to launch strikes against Israeli forces, its members were hounded and beaten by none other than furious Lebanese, who are being meticulously used by Hezbollah as mere cannon fodders in its war against the Jewish state.

The PIJ, on the other hand, could meet the same fate as Hamas did in its 11-day war against Israel in May this year. Israel’s incessant strikes upon Hamas caused the terrorist organization to lose its bearings and prompted it to conclude a ceasefire with Israel after suffering heavy causalities on its side.

A three-front war against Israel would help Iran achieve nothing other than the destruction of its delegates and its interests in the region. Instead, it will help Iranians, Gazans and Lebanese in freeing themselves from the clutches of Islamic terrorism that has spelt doom for their lives over the past decades. Iran’s suicidal war against Israel would mark a new beginning for peace and prosperity in the so-far troubled region.