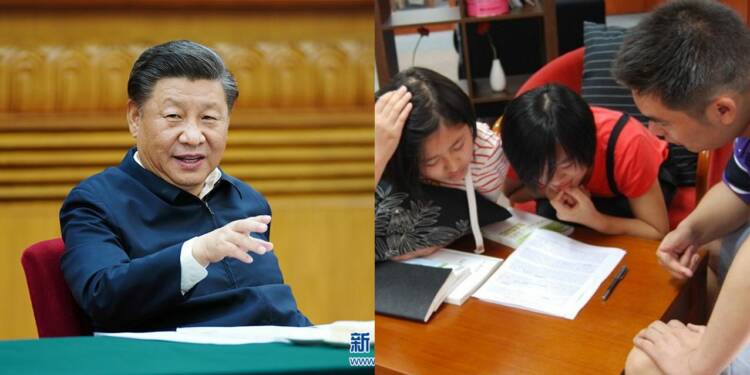 Chinese President Xi Jinping is seeing his end right before his eyes. China’s youth is dead against the Chinese President, and they want to end his villainous reign. So, he wants a Cultural Revolution of his own to rid the youngsters of such hostility and stop young children from realising the truth about him.

So, Xi Jinping’s latest target is the English language. Schoolchildren in Shanghai will no longer need to remember English spellings. But they will be forced to read something else; a textbook on “Xi Jinping Thought on Socialism with Chinese Characteristics for a New Era”. Reading of the textbook will be required in elementary, middle, and high schools starting in September, for classes on morality, rule of law and other concepts of Statecraft. Notably, they will be required to memorise notable quotes by Xi Jinping by heart.

Shanghai is just the tip of the iceberg. China’s Education Ministry has announced that the “Xi Jinping Thoughts” textbook will be introduced in schools nationwide starting this fall. So, a paranoid Xi Jinping wants China’s future generations to read only about him. Therefore, Beijing will also crackdown on foreign textbooks in primary and junior high schools.

Xi Jinping feels that private education and foreign education could create ideological conflict in several parts of China. It could also fuel Hong Kong-style activism in different parts of the Communist nation.

Xi has been already cracking down on English teachers in China, as youth keep digging anti-CCP content despite the great firewall and rampant censorship. Again, the idea is to strictly control the kind of education imparted to children in the country.

Presently, Xi Jinping’s China is witnessing the downfall of the private, profit-making education sector. The Chinese Communist Party (CCP) is taking over Chinese education. The Central Committee of the Party has abruptly ordered private tutoring providers to turn into non-profit organizations. Xi Jinping’s idea is to roll out populist measures in the education sector and gradually take over the learning system in the country.

While Xi Jinping claims that the purpose of such measures is to relieve Chinese parents of the high financial burden of education, a source familiar with the world of Chinese education said that the “the reality is that the order is aimed at strengthening political management of and control over the private education sector.”

At the end of the day, Xi Jinping’s object is to control what a young Chinese child reads or learns. So, he is cracking down on sources of learning and entertainment for young children. He is therefore cracking down on the Edutech sector and even video games.

Actually, Xi knows that people are understanding what he is up to. There is reportedly growing discontent among some of his fellow “second-generation reds”- a reference to the children of revolutionary-era party leaders.

They understand how Xi’s policies are leading to serious repercussions like visa restrictions by the US government against CCP members and their families. Xi is facing a great degree of pressure from such leaders who even lobbied him to get the issue raised when Chinese Vice Foreign Minister Xie Feng met U.S. Deputy Secretary of State Wendy Sherman in Tianjin last month.

For Xi, his contemporary leaders aren’t a major issue. He is afraid of the youth, teenagers, and the children of his country. Xi is in for the long haul and wants to rule for several more years.

By the time the Chinese children and teenagers start exerting enough influence in the country, he might face some major problems. Xi knows that China’s future generations can engineer his end and therefore he is trying to create a personality cult among them by compelling them to read about “Xi Jinping’s thoughts”. This is how the Chinese President seeks to save his regime from the inevitable doom.