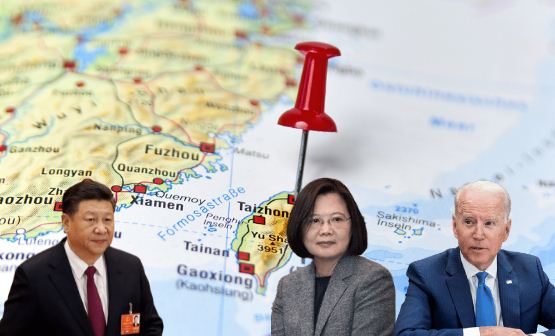 The USA’s debacle in Afghanistan has set alarm bells ringing among the USA’s allies worldwide. Especially, the Europeans are miffed at Biden’s hasty withdrawal amid fears that the crisis in Afghanistan could trigger a new wave of mass migration, with large number of Afghans seeking refuge in the Europe.

However, the USA’s Afghanistan fiasco has also laid bare the USA’s exaggerated role as a bulwark against the Chinese threat for some countries in the East. On the other hand, the USA’s abandoning of Afghan people has provided China a stick to beat the United States with, which has subsequently upped the ante in South China Sea aimed at intimidating the island nation of Taiwan.

The US has miserably failed in Afghanistan, and now China is rushing to make the most out of it. China is not only striving to forge friendly ties with the Taliban to ascend its influence in Afghanistan, but is also stepping up pressure in the South China Sea while projecting America as the least trustworthy ally for any country seeking its help against China.

Read More: Two decades of nothing. Afghanistan is America’s worst defeat ever

The article reads, “The DPP authorities need to keep a sober head, and the secessionist forces should reserve the ability to wake up from their dreams. From what happened in Afghanistan, they should perceive that once a war breaks out in the Straits, the island’s defense will collapse in hours and the US military won’t come to help. As a result, the DPP authorities will quickly surrender, while some high-level officials may flee by plane.”

Taiwanese authorities have so far maintained a sheer silence over the American blunder in Afghanistan. However, the developments must have sparked a fear in Taiwanese leadership regarding the USA’s commitments towards the defense of Taiwan in any event of Chinese aggression. For worse, the US authorities are doing exactly nothing to shave off the growing fears among the allies.

Read More: The UK is not happy with Biden’s Afghanistan policy and it is NATO that will suffer for it

The People’s Liberation Army or the PLA also lost no time in joining in the chorus of the bellicose Chinese media, and launched joint live-fire assault drills in multiple locations near the island of Taiwan. As reported by Global Times, The PLA Eastern Theater Command on Tuesday dispatched warships, anti-submarine warfare aircraft and fighter jets in surrounding maritime and aerial areas near the southwest and southeast of the island of Taiwan for military exercises including joint live-fire assaults, and also for testing the command troops’ integrated joint operation capabilities.

The message from China is clear. It wants to spark fears among the US allies that forming their anti-China strategies merely based on the USA’s commitments could prove disastrous for the countries such as Japan and Taiwan.

Undoubtedly, the US has a tendency to abandon its allies in order to serve its interests. Considering the USA’s dubious role in the Vietnamese war of 1975 and its abandoning of the Kurds in 2019 in Syria, the horrifying scenario being unfolded in Afghanistan is absolutely not unexpected.

The hasty Afghan exit has provided China with a blank check to blatantly and unquestionably contravene the international laws while the US struggles to mend its image overseas. The fact that the PLA lost no time in showcasing its military adventurism off the coasts of Taiwanese island clearly illustrates that the American debacle in Afghanistan has bolstered and emboldened China’s resolute to forcefully take over the Taiwanese territories.

The USA’s support to Taiwanese freedom has already weakened under the Biden administration. In July this year, Joe Biden’s Asia Czar Kurt Campbell had denounced the island nation’s call for independence owing to the “sensitivities involved” in the matter.

Now, the USA’s failure in Kabul serves as a wake-up call for the USA’s allies across the globe. Biden’s fiasco in Afghanistan has put Taiwan in a fix, which now faces a grave existential threat from a belligerent China. Taiwan should brace itself for a perfect storm propelled by Biden’s ill thought actions in Afghanistan. Relying solely on the USA’s commitments could very well spell a doom for the proud democratic nation on Taiwan.