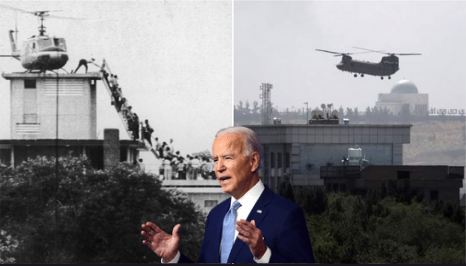 ‘F**k that, we don’t have to worry about that. We did it in Vietnam, Nixon and Kissinger got away with it.’ These are the words of Joe Biden. Now, do you get why Afghanistan is in chaos?

You know things are wrong when even those most loyal to you are not able to take your side publicly. The events which are taking place in Afghanistan are so heartwrenching that even the most loyal media houses are not able to come to Biden’s support entirely.

In such a situation, the Biden administration is trying to lay the blame on everyone but itself. However, the images are so obvious that all these efforts are ending up in vain.

Images of the US evacuating Americans from Kabul resemble the US withdrawal from Saigon in 1975, following a humiliating defeat in the Vietnam War. While some are trying to blame it on intelligence failure, but there is more to it than just that. The chain of events and Biden’s older statements point in a different direction.

The historic scale of the diplomatic blunder that the Biden administration has made is really immeasurable. Joe Biden’s image diminished as fast as the defence of Kabul. Some are even pushing the narrative that it was an intelligence failure. However, the fact that such statements are coming from within the US is unbelievable. And in such a scenario the sudden troops’ pullout could be purely intentional on the part of Joe Biden. Biden might have known what chaos was coming to Kabul and still, did not take any action to stop the rise of the Taliban. And both, latest developments and past mentions are substantiative evidence.

The situation in Afghanistan has solidified for the worse, and hope has left the capital. All of this has been the making of the Biden administration, which failed on every front and made the worst possible exit from a country where the US had invested so much. And while all this was going on, President Biden retired to a resort in Maryland. If these pieces of evidence do not sound incriminating enough, then there is more.

In 2010, Joe Biden informed Obama’s special representative for Afghanistan and Pakistan, Richard Holbrooke, that the US had to leave Afghanistan regardless of the repercussions for women or anybody else. If we corroborate this with the current situation in Afghanistan, this makes sense. The situation has deteriorated in the region and the Taliban has taken over the country two weeks before the USA had declared the last day to move out of Afghanistan.

The US alone has to evacuate an estimated 88,000 people in Afghanistan. It includes those who worked against the Taliban and supported the US military or other agencies in Afghanistan. Biden said, “Operation Allies Refugee [Refuge], which I announced back in July, has already moved 2,000 Afghans who are eligible for Special Immigration Visas and their families to the United States.”

Read more: Biden lied through his teeth in his latest speech

Biden isn’t even talking about the 86,000 people left behind for the Taliban to slaughter and whose evacuation is America’s moral responsibility. In fact, Biden has botched up the evacuation of not only American interests but also the interests of all other countries in the war-torn nation of Afghanistan. In order to legitimise his hasty withdrawal from Afghanistan, Biden also said, “Afghanistan political leaders gave up and fled the country. The Afghan military collapsed, sometimes without trying to fight.”

Biden’s premise that the Afghans don’t want to fight the Taliban is fundamentally flawed. As Afghanistan’s former Vice-President Amrullah Saleh himself made a strong statement where he mentioned that he won’t disappoint millions who listened to him. And he will never be under one ceiling with the Taliban.

These kinds of careless statements can only come from someone who does not care about the fate of the people and the country, that is Afghanistan. According to Holbrooke’s diary, as cited in POLITICO, when he asked about American obligations to Afghans, Biden replied with a history lesson from the final US withdrawal from Southeast Asia in 1973: ‘Fuck that, we don’t have to worry about that. We did it in Vietnam, Nixon and Kissinger got away with it.’

Now, how can anyone expect a good geopolitical outlook from someone who thinks he can get away with a Saigon-like situation without any repercussions, like Nixon and Kissinger? It was Kissinger and Nixon whose actions made China what it is today and it was under their leadership that the USA retreated from Vietnam. Now Biden too may have acted deliberately. He just did not just care about, women, children and everyone that supported the US in Afghanistan. He has even left behind thousands of US citizens stranded and surrounded by the Taliban.

While Joe Biden may brush off the criticism, in the long run, people will remember his actions and how catastrophic they were for the very people who had supported the US.