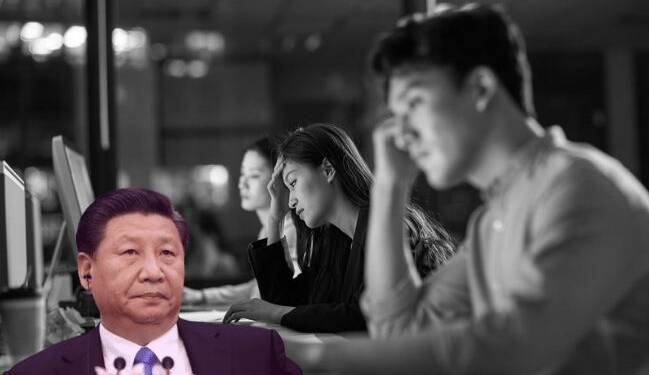 The CCP has finally given in to a protest by its citizens. For decades, the CCP forced the people of China to work 12 hours a day, six days a week to pump rampant economic growth. The CCP indoctrinated the people of China by telling them that material betterment is the only dimension of human prosperity. So, for several generations, the people of China didn’t even complain about inhuman working hours and the lack of a fulfilling life.  However, a novel protest called “lying flat” against the 996 regime, that is, working from 9 am to 9 pm, six days a week, is forcing Beijing to rethink. In fact, the Chinese Communist Party is cracking down on the 996 culture in order to placate the restless Chinese youngsters.

Reuters has reported that China’s Supreme People’s Court has described the overtime practice of “996” culture as illegal. This is a big change on the part of the Chinese state, which used to instigate Chinese technology firms into following the controversial practice.

In fact, China’s Ministry of Human Resources and Social Security on Thursday published guidelines and examples on what constituted as overtime work. The Ministry also admitted that they were focusing on the issue because it has gained widespread attention recently.

The Chinese authorities even took the example of a parcel company to explain why “996” was illegal, even though inducing such a regime had become a badge of honour for many Chinese firms. It was a means of showing loyalty to the CCP’s goals of pumping economic growth by exploiting the Chinese workforce. This was a part of CCP’s strategy to put China in an advantageous position over the free world.

The Chinese state is, of course, an authoritarian regime and hardly cares about human rights. So, we do know for a fact that the sudden crackdown on “996” culture isn’t a matter of good conscience on Beijing’s part. China has been forced to get rid of the exploitative regime because it was simply becoming unsustainable.

Youngsters in China have been protesting against the “996” culture in a rather unique way. They launched what came to be known as the “lying flat” (tangping) movement. The movement didn’t involve any sloganeering or active protest, rather it meant lying down and doing absolutely nothing.

The “lying flat” movement was triggered by the rising insecurities in Chinese youth, who witnessed how older generations didn’t really head towards prosperity, well-being or satisfaction by following China’s “996” culture policy. In fact, China’s young population got apprehensive that it won’t be able to do better than its preceding generation.

“996” culture had actually started taking a massive toll upon the well-being of Chinese employees. Rising prices and relatively stagnant incomes meant that Chinese workers had to work for longer hours but lower effective salaries. According to local reports in China, the unemployment rate is rising and currently stands at 5.5 per cent. In the 16-24 age group, it is as high as 13.1 per cent.

For Chinese President Xi Jinping, the rising unemployment and lack of willingness in Chinese youth to work created signs of an impending workforce crisis. It seemed as if China would simply not find enough youngsters to meet its ambitious growth targets.

Initially, Beijing tried to fight the “lying flat” movement by cutting linkages between the Chinese youth and the West. The Chinese state media also called tangping “shameful” and the censors deleted a tangping group with over 9,000 members on Douban, a popular internet forum.

China’s internet regulator too ordered online platforms to “strictly restrict” new posts on tangping. For some time, the Xi Jinping administration tried to restrict the “lying flat” movement through censorship and state-run propaganda.

However, the pressure that the CCP is facing from Chinese youth is simply enormous. Xiang Biao, a professor of social anthropology at Oxford University with expertise on Chinese society, said, “Young people feel a kind of pressure that they cannot explain and they feel that promises were broken.”

Xiang added, “People realise that material betterment is no longer the single most important source of meaning in life”.

The CCP ultimately failed to combat the “lying flat” movement. Last month, TikTok owner ByteDance said that it would formally end its weekend overtime policy with effect from August 1. Kuaishou, TikTok’s short-video rival, too has announced a similar decision.

The message to Xi Jinping was loud and clear. He knew that even if the CCP doesn’t give in to the protest against the “996” culture, the big corporates will eventually adapt themselves to humane working hours. In such a case, the CCP would have become even more unpopular with the Communist nation’s youngsters. And therefore, the Chinese authorities are now reluctantly ending the era of forcing Chinese workers to work for long hours under inhumane conditions.