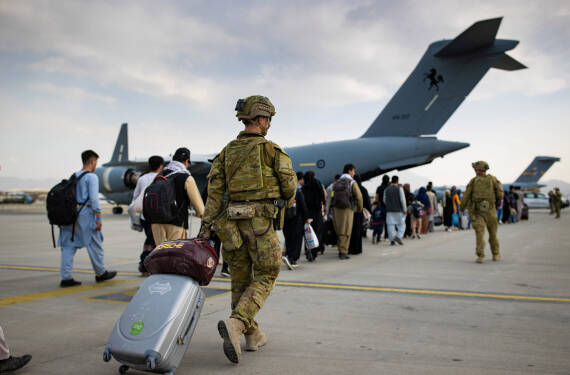 The Biden administration’s definition of a respectable withdrawal is entirely in opposition to what is the world norm. The desperate evacuation campaign of the United States of America and its allies from Afghanistan has dealt a huge dent in the image of Washington as the undisputed leader of the free and democratic world order. Currently, the US has been reduced to an object of global shame and ridicule due to Joe Biden’s catastrophic and ill-thought surrender to the Taliban in Afghanistan.

Leave alone evacuating friends of America and its allies, the United States was not even able to successfully evacuate its own citizens from Afghanistan. And now as the last of US troops have withdrawn, those who have been left behind are people who have helped the U.S. and its allies throughout the 20-year long inconsequential war in Afghanistan. And due to Joe Biden’s ill-intended withdrawal, all these people are left at the Taliban’s mercy. Now, going ahead, the world will watch Afghanistan descend from hope to hopelessness.

These harsh realities, however, will not only impact the domestic situation of Afghanistan but will also have an impact on the neighbourhood. For Afghanistan, the Taliban is a legacy foisted on the country by foreign leaders such as Biden, Xi, and Imran Khan. Afghanistan is already in a precarious position. The majority of the children are malnourished, and half of the population requires humanitarian assistance. The Taliban are not recognised by the majority of countries.

Even if they recognise a Taliban government, any money you provide the terror group will be used to carry out further attacks like 9/11, regardless of the US-Taliban peace agreement. Meanwhile, China and Pakistan will strive to make as much money as possible from the war-torn country by using its mines, metals, opium, and other resources. Domestically, barbaric, and medieval punishment is being carried out on fellow Afghans, whom it claims to have given a general amnesty.

Read more: Biden is using the Kabul blasts to shift attention from his debacle and legitimize the Taliban

The situation in India is delicate. Let us not be fooled into thinking that the Taliban and Kashmir are unrelated issues. Many terror organisations that previously operated for the Taliban, including JeM, JuD, and LeT, have recently focused on Kashmir. The government of Imran Khan and the terror groups it finances are attempting to persuade the Taliban to include Kashmir on the agenda. India must be vigilant while also acknowledging that the Taliban is not a homogeneous group. We’re effectively dealing with savages from the Middle Ages, who are naturally unpredictable.

The Taliban’s ascendancy in Afghanistan has sounded the alarm thousands of kilometres away in Southeast Asia. Millions of Muslims live in the region. The success of the Islamist group has alarmed Southeast Asian governments, who fear that it may encourage extremism in their countries. Predominantly, the region faces two challenges out of the Taliban’s triumph in Afghanistan. The first is that this could spur a massive influx of refugees into these developing nations. The pandemic has already taken a toll upon the region’s economy. Now, a Taliban-engineered refugee crisis could exacerbate its financial woes.

Read more: The butterfly effect of Afghanistan on Indonesia, Malaysia, Brunei, The Philippines, and Thailand

The second biggest challenge for the Southeast Asian governments would be to rein in the ensuing ideological impact on the region. The region houses a considerable number of extremist and militant organizations, and for worse, the Taliban’s regime in Afghanistan could very well inspire them to replicate the Taliban’s model in Indonesia, Malaysia, Brunei, The Philippines, and Thailand.

While Central Asia, Iran and China all are worried about the Balkanisation of Afghanistan, and it is ending up flushing into a worse off situation. The domestic situation is only going to flare up and it will, in turn, become a hotbed for Terrorists and for the existence of the terror outfits. The Taliban used a US chopper to publicly hang a civilian above Kandahar, according to a new video shared online. A man hangs from a helicopter as it flies over Kandahar ahead of the US withdrawal from Afghanistan, according to footage uploaded on Twitter. According to reports, the Taliban now has access to $85 billion worth of American military equipment that the US has abandoned, including up to 600,000 guns, 75,000 vehicles, and hundreds of aircraft that the US has supplied to the Afghan army.

Going ahead as the problems in Afghanistan have become exponential and while the last troops of the USA have withdrawn, Afghanistan will end up in a whirlwind of problems.