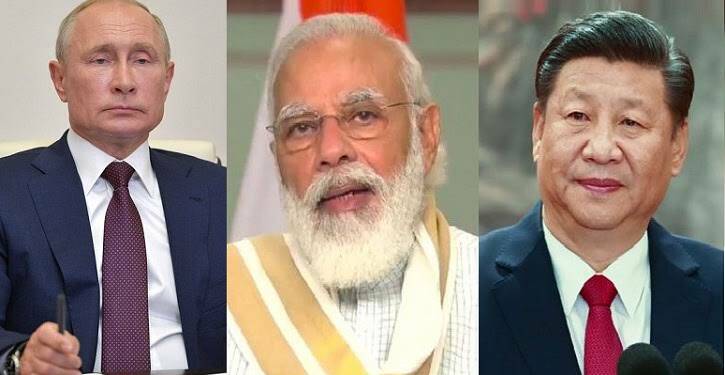 Russia’s President Vladimir Putin is all set to visit India later this year. During his India visit, Putin will hold an in person summit with India’s Prime Minister Narendra Modi for the first time since the onset of the Coronavirus Pandemic last year. The agenda of Putin-Modi meeting seems to be becoming clear. The two flamboyant leaders seem to be working on mutual plans to deter an expansionist China. New Delhi and Moscow are looking to get together and drive China away from the Russian Far East region and the Indian Ocean Region (IOR).

India could be leasing a nuclear-powered attack submarine from Russia

India has presently signed or is negotiating arms purchases worth $15 billion from Russia. From long-range missiles to fighter aircraft, and assault rifles, India continues to look at Russia as a major defence partner in the process of modernizing its own armed forces.
However, the main highlight is the prospect of India leasing a second nuclear-powered attack submarine (SSN) from Russia. India is already looking to induct one Russian SSN into its fleet in 2026. If India and Russia strike a deal for leasing a second SSN, then New Delhi’s naval power in the Indian Ocean Region (IOR) will be bolstered dramatically.
SSNs are crucial assets as they can stay and operate underwater for very long durations. In fact, their endurance is restricted only by food supplies for the crew. Also, they are equipped with tactical weapons like torpedoes, anti-ship cruise missiles and land-attack cruise missiles, which make these submarines lethal in character.
SSNs form battle groups centred around aircraft carriers. With two SSNs in operation, the Indian Navy would be able to operate two independent carrier battle groups simultaneously- one centred around the INS Vikramaditya and the other around INS Vikrant.

India’s plans to lease a second SSN from Russia carries a significant Indian Ocean connection. New Delhi has always been concerned about China’s attempts to expand its presence in the IOR.
New Delhi considers the IOR to be its privileged sphere of influence. However, Beijing has been trying to mount trouble on India under its ‘String of Pearls’ strategy by building a network of ports and other infrastructure surrounding India in the IOR.
Often, Chinese military vessels are also spotted in the IOR near India’s Andaman & Nicobar Islands. Now, by shoring up its naval power with Russian submarines, New Delhi is sending a loud and clear message to Beijing- stay away from the Indian Ocean. In fact, India’s enhanced naval power must deter China’s hawkish behaviour as the paper Dragon would also understand that it might have to pay a heavy price for any miscalculations.

Prime Minister Modi has been quite clear and forthcoming about India’s readiness and willingness to help Russia develop its Far East region.
Speaking at the Eastern Economic Forum, Modi said, “I am delighted to address Eastern Economic Forum and thank President Vladimir Putin for this honour.”
Modi then went on to appreciate the importance of the Russian Far East Capital Vladivostok. He said, “In Indian history and civilization, ‘sangam’ (coalescence) has a special meaning. It means confluence or coming together of rivers, people and ideas. In my view, Vladivostok is truly a ‘sangam’ (or confluence) of Eurasia and Pacific.”
India’s Prime Minister added, “I applaud President Putin’s vision for the development of the Russian Far East. India will be a reliable partner for Russia in realising this vision. In 2019, when I had visited Vladivostok to attend the forum, I had announced India’s commitment to enact Far East Policy.”
Prime Minister Narendra Modi also invited governors of the 11 regions of the Russian Far East to visit India, presumably in order to deepen Indo-Russian cooperation in the Russian Far East.

Prime Minister Modi’s focus on helping Russia develop its Far East region has an intimate China connection. Chinese influence has been growing rapidly in the Russian Far East, a sparsely populated and resource-rich region. Through this vast territory, an expansionist China is also trying to achieve its ambitions of becoming a “near-Arctic state”.
In fact, Chinese Communist hardliners go as far as staking claim upon the port city of Vladivostok. This is why Prime Minister Modi’s remarks about the significance of Vladivostok are extremely important. He is directly undermining China’s position by making it clear that the port city holds a lot of importance in Indo-Russian cooperation.
In fact, India is already helping Russia secure and protect its Far East region for Chinese expansionism. In 2019, India extended a $1 billion line of credit to Russia for the development of its Far East region. India is also looking to develop a sea route linking India’s Chennai with Russian Far East city of Vladivostok that will pass through the South China Sea, securing the Russian Far East territory and at the same time needling China.
Meanwhile, Prime Minister Modi also announced that India’s biggest shipyards will partner with Russia’s Zvezda for construction of some of the world’s most important commercial ships. Moscow and New Delhi are thus looking to enhance their maritime power jointly in order to overcome the imminent challenge posed by China’s growing maritime belligerence in the Indo-Pacific. As such, the idea is to secure the entire region from the IOR to the Russian Far East.
Tags: ChinaExhaustive ReadsIndiaIndian Ocean Regionnuclear submarineRussiaRussian Far EastSSN
ShareTweetSend
Previous Post

Why Biden is scared of Netanyahu’s possible return to power