No one blames JFK for Vietnam, but it was he who caused countless American deaths 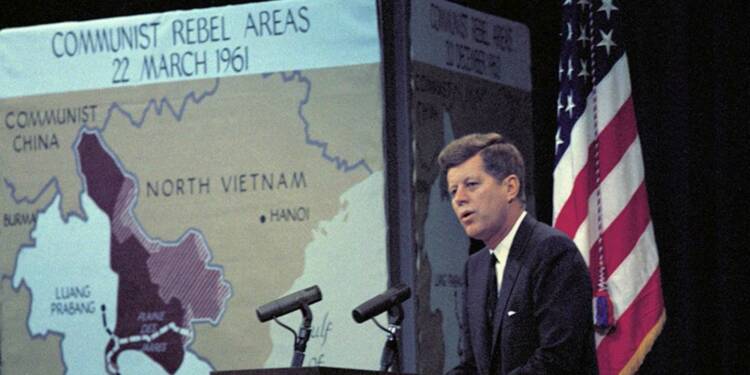 The war in Vietnam, between the country’s northern guerrilla Communists led by Ho Chi Minh and the South’s pro-West authoritative-democracy enthusiasts really transpired, or rather snowballed from bad to worse under five American presidents, beginning with Harry Truman and ending with Richard Nixon, and having Dwight D. Eisenhower, John F. Kennedy and Lyndon B. Johnson in between. For some strange reason, while Eisenhower, Johnson, Nixon, and even Truman are often mentioned in discussions relating to the war in Vietnam, Kennedy is ignored – as if he had nothing at all to do with what would become America’s worst defeat ever.

Perhaps, the fact that Kennedy was assassinated and was deprived of the chance to even complete his first term in office has something to do with a general aversion of Americans to talk about the man’s disastrous decisions pertaining to Vietnam, which eventually became the bedrock of the United States being made to flee Saigon in 1975. Two major decisions which John F Kennedy took as President really messed up the United States’ chances at winning the war in Vietnam, and not being defeated by the Communists led by Ho Chi Minh.

Geoffrey Shaw’s ‘The Lost Mandate of Heaven’ gives some intriguing details about how the United States lost the war in Vietnam during the presidency of John F. Kennedy itself. Shaw’s book principally focuses on the Kennedy administration’s “betrayal” and collusion— or at the very least its complacence — in the 1963 military coup that resulted in the assassination of South Vietnamese President Ngo Dinh Diem, who by the way, was an ally of America. Yet, he was assassinated and gotten rid of since, in the words of the Kennedy administration, Diem was not “democratic enough” to suit them.

One may ask who succeeded President Ngo Dinh Diem after the 1963 coup, which Kennedy consented to and helped effectuate. Well, it was a military dictatorship! Perhaps that was “democratic enough” for the then-White House occupants. Ngo Dinh Diem was actually despised by American media, who projected him as an anti-Buddhist despot. Whether that projection was true or not, the Kennedy administration’s complicity in getting the nationalist leader of South Vietnam killed really proved to be a nail in the coffin of America’s fortunes in the Southeast Asian country.

Read more: ‘F*ck that, we did it in Vietnam too,’ Biden knew the Taliban will take over Afghanistan. He just didn’t care

John Kennedy took a conscious decision when he allowed the assassination of President Ngo Dinh Diem. This is because his administration was warned against any such action by U.S.’ ambassador to South Vietnam, Frederick Nolting. In a communique exchanged with the White House, Nolting on October 8, 1961, said, “Diệm does not organize well, does not delegate sufficient responsibility to his subordinates and does not appear to know how to cultivate large-scale political support. In my judgment, he is right and sound in his objectives and completely forthright with us. I think it would be a mistake to seek an alternative to Diệm at this time or in the foreseeable future. Our present policy of all-out support to the present government here is, I think, our only feasible alternative.”

Ignoring such advice, Kennedy went ahead with consenting to Diem’s assassination. This was a blunder, and the President must be held accountable for it.

Agreeing to the ‘Neutrality of Laos’

Among the biggest blunders which cost the United States heavily was John F Kennedy’s decision to bind the USA by international treaty to officially honour the “neutrality” of Laos. North Vietnam and Ho Chi Minh’s forces violated the agreement almost immediately. These Communist guerrillas launched an entire campaign to occupy Laos’ entire eastern half and construct the extensive logistical network, known as the Ho Chi Minh Trail, which was vital for North Vietnam’s prosecution of the war.

The Ho Chi Minh would come to become the biggest reason why the United States would lose to the Communist guerrillas by 1975. According to History Net, it is hardly an exaggeration to state that every American killed in ground combat in South Vietnam during the war died from a bullet, rocket-propelled grenade, mortar round, artillery shell or hand grenade brought south via the Ho Chi Minh Trail, considering the fact that there was no alternative route for Hanoi to get the weapons south other than through “neutral” Laos.

Before President Lyndon B. Johnson announced an invasion of Vietnam, Kennedy had already ensured that America becomes physically and inextricably woven into the war between North and South Vietnam, through a disadvantageous position no less. By the time of his assassination in 1963, there were 16,000 U.S. soldiers in South Vietnam.

As the people of American realise how Joe Biden has really surrendered to the Taliban and lost the Afghan war with his ill-planned withdrawal, it is also time to hold previous presidents like Kennedy accountable for how they put the United States into unwinnable positions, leading to an embarrassment which the people of America had never seen before.

China is no longer the most attractive investment destination in the world. India is