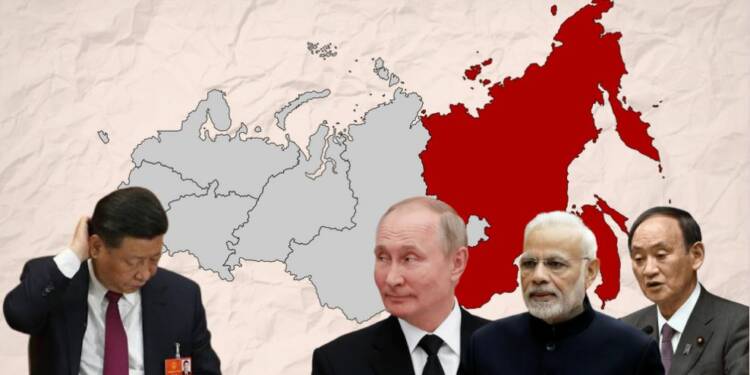 For over a year, the resource-rich Russian Far East has been in news. China has been staking claim over the historically significant region, whereas Russian President Vladimir Putin has been trying to ramp up development in the sparsely populated region. Now, the myth of a Sino-Russian alliance is about to take a major hit as Russia prepares to join hands with India and Japan, effectively kicking China out of the Russian Far East.

There are many developments that indicate the rise of an India-Japan-Russia trilateral for speeding the development process in the Russian Far East.

● Most notably, Economic Times, a popular Indian daily, has reported that China is not able to reap any great benefit of infrastructure development projects in the Russian Far East.

● Locals in the region are growing increasingly apprehensive of China’s ambitions to maximise profits.

● Russia is itself looking to collaborate with Japan and India for the development of the Russian Far East.

China grows wary of investments in the RFE

China is growing increasingly disinterested and wary of its investments in the Russian Far East. China has invested in only eight projects in the resource-rich region. In fact, China has claimed that the opportunities coming its way in the region are financially unattractive.

In fact, several Russian projects like the Eurasia Railroad, which was supposed to link Beijing, Berlin and Moscow have failed to secure Chinese funding. The disinterest being shown by China is perplexing. Remember, China is always eager to invest in global infrastructure projects as part of President Xi Jinping’s flagship Belt and Road Initiative (BRI). Investment in strategic cross-border projects is, in fact, at the core of Xi Jinping’s hawkish foreign policy.

And when it comes to the Russian Far East, which the Chinese Communist hardliners claim to be a part of China’s territory, Xi Jinping would have been more than eager to invest in infrastructure projects.

So, if China is not making any big investments in the Russian Far East, then it really means that Moscow isn’t really letting Xi lay his hands upon any financially viable projects.

Growing resentment against China in RFE

Xi is also battling increasingly hostile sentiment against his country in the Russian Far East. Locals believe that Beijing is trying to reap the entire benefit of accelerated development in the resource-rich region.

The Russian Far East already had a bitter experience of Chinese selfishness during the Program of Cooperation between Northeast China and Eastern Siberia, Russia’s Far East (2009-18). Moreover, financial difficulties in the program and the implementation of a top-down Directive didn’t really go down well with the locals.

Moreover, given China’s history of overtaking key infrastructure projects, including strategic ports like the Hambantota port in Sri Lanka and the Darwin port in northern Australia, locals in the Russian Far East also entertain a nagging fear of China trying to overtake key ports of mineral-rich areas.

A statement released after talks among the three countries stated, “The participants agreed that it is in the three countries’ shared interest to promote the trilateral framework to harness economic opportunities in the Russian Far East for mutual benefit.”

The three countries had also welcomed their growing links in the Arctic, “recognising the inter-connected nature of regional development alongside the Russian Far East.”

Recently, India’s Prime Minister Narendra Modi too had underscored the growing importance of the Russian Far East. He said, “In Indian history and civilization, ‘sangam’ (coalescence) has a special meaning. It means confluence or coming together of rivers, people and ideas. In my view, Vladivostok (the Russian Far East capital) is truly a ‘sangam’ (or confluence) of Eurasia and Pacific.”

As India and Japan show growing interest in helping Russia develop its Far East region, China’s readiness and willingness to play any major role in the region is shrinking uncontrollably. Russia has thus effectively kicked China out of the Russian Far East.