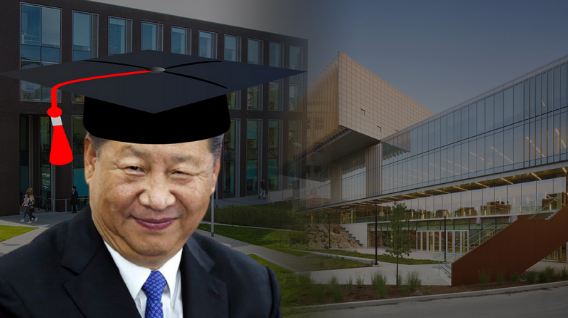 China is rising in terms of hegemony and global influence. And as the West tries to push back against China’s growing influence, the authoritarian nation is trying to buy out the very soul of the Western world- its premier educational institutions.

The curious case of the Cambridge Centre for Chinese Management (CCCM)

Chinese interference at the CCCM really reveals how China has been trying to infiltrate British educational institutions by hook or by crook. Three out of four of the directors at the premier research centre are said to have ties to Huawei, a Chinese technology giant whose 5G technology has been banned in the UK over national security concerns.

In fact, The Times has also reported that the CCCM was launched in 2018 in Shenzhen, a Chinese tech hub. Yanping Hu, a former senior Huawei vice-president, has been described as the research centre’s chief representative on its website. Hu is reportedly “entitled to a special allowance from the State Council”. The allowance is a special award for experts favoured by the Chinese Communist Party (CCP).

Meanwhile, the Cambridge University has clarified that Hu “is not currently and has never provided anything towards or delivered any services to Cambridge Judge Business School or the Cambridge Centre for Chinese Management”.

Chinese influence at the CCCM is really just the tip of the iceberg. In June, a study by the China Research Group, that is the CRG, a conservative group that bats for a more hawkish British foreign policy against China, found that twenty leading UK universities had received a total of over £40 million ($55.38 million) from Huawei and Chinese State-owned companies in recent years.

Imperial College London received between £3.5 million and £14.5 million from Huawei. The University also accepted at least £10 million from Sinopec, China’s state-controlled petroleum and chemicals corporation and £6.5 million from the Aviation Industry Corporation of China (Avic), which is a Chinese State-owned defence and aerospace company.

Meanwhile, Huawei also gave  £1.1 million to Lancaster University for research on sensitive subjects like semiconductors, computing and machine learning since 2015. It also gave £890,000 to York University for undisclosed research projects. The institutions made these disclosures in response to Freedom of Information (FOI) requests from the CRG.

China’s clear strategy is to hijack British education by making them dependent on its students for their finances.

More students translate into more fees and earnings for British institutions. Fee income from Chinese students stood at £2.1bn in 2018-19, which was over 10 per cent of the total. At some premier Universities like Liverpool, Glasgow, Sheffield, Manchester, UCL and Imperial College, fees from Chinese students accounted for over a quarter of the fee income.

The Guardian further reported that Liverpool and Nottingham have campuses in China. Cambridge has a Chong Hua professorship in development studies, which is endowed with £3.7 million in charity controlled by the family of a former Chinese PM. Moreover, at least 10 UK research laboratories are now perilously dependent on funding from Chinese defence firms.

Make no mistake, Chinese funding to British Universities is no philanthropy. This is a strategic investment that companies with close ties to the CCP and the Chinese State-owned enterprises are making. They have two main purposes to achieve- firstly, to control the narrative on key issues like human rights violations committed by CCP authorities in China and secondly, to hijack critical research centres in the UK involved in crucial sectors like semiconductors.

Tom Tugendhat, the Tory MP, who heads the CRG and serves as the chairman of the foreign affairs select committee, said, “Perceived academic influence is clearly an issue and just as universities would never take money from tobacco companies to investigate links with cancer so institutions need to be very careful about where they accept their money.”

The UK must understand that China is trying to buy out its educational institutions. Ultimately, China is trying to control the British academia and bring them in line with Chinese authoritarianism. This is actually a direct assault on British democracy and freedoms. A similar Chinese attack was also targeting Australian Universities, but the Scott Morrison government was able to secure its campuses in time. Now, it remains to be seen if the UK can protect its campuses from the CCP.

A new Anglo-French war looks like a possibility, only this time it will be a diplomatic one