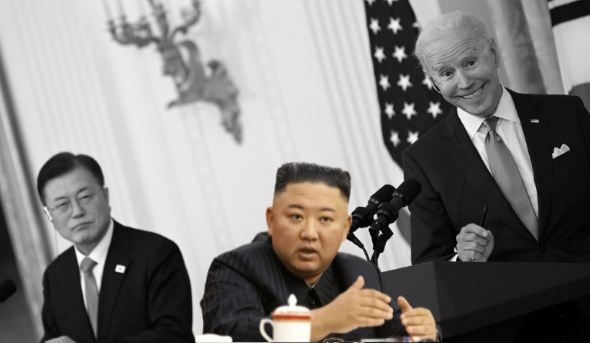 North Korea is going nuclear at a breakneck speed. Meanwhile, US President Joe Biden and South Korean President Moon Jae-in, the two leaders who are mainly concerned with denuclearisation in the Korean Peninsula, seem totally clueless.

In fact, North Korea is believed to have restarted a nuclear reactor used to produce plutonium for nuclear weapons.

While North Korea’s nuclear programme is in full swing, the Moon administration cannot go beyond talking about cooperation and aid to placate a belligerent Pyongyang. South Korea’s Unification Minister Lee In-young on Friday said that Seoul will cooperate with the US to provide humanitarian aid to North Korea despite escalating tensions with Pyongyang over a recent missile launch by the Communist country.

What the Moon administration is doing right now reeks of the clueless agenda of the Progressives to engage North Korea without any clear strategy or plan to achieve specific policy objectives. This is starkly in contrast with the South Korean Conservatives who don’t believe in appeasing Pyongyang and take a hardline approach against their belligerent neighbour.

Lee said, “Although many have once again raised concerns over North Korea’s recent missiles launch, I believe our determination towards bringing peace has become stronger amid a robust readiness posture.” Again, Lee has taken the clueless agenda of Moon to advance denuclearisation talks further without any strategy in his mind.

US President Joe Biden is giving clear signals of weakness in face of North Korean Supreme Leader Kim Jong-un’s aggressive behaviour. Jalina Porter, the principal deputy spokeswoman for the State Department, said, “The United States remains committed to a diplomatic approach to the DPRK, and we also call on the DPRK to engage in dialogue.”

US State Department spokesman Ned Price too spoke in abstract terms. He said, “We are, in the midst of this, committed to a diplomatic approach to the DPRK, and we call on the DPRK to engage in a meaningful and substantive dialogue with us.”

How Moon and Biden are going wrong

Biden and Moon administrations are giving some really defeatist statements here. By talking about humanitarian aid and dialogue without any clear policy goals even as Kim blasts nuclear missiles to augment Pyongyang’s destructive capabilities, they are exhibiting weakness. And when you show signs of weakness to a dictatorial bully, you embolden his aggressive policies. This is exactly what is happening with North Korea at this point.

Moon and Biden have inflated Kim’s ego, and it seems that he won’t stop easily now. In a commentary run by North Korea’s official Korean Central News Agency, Pyongyang accused the US of a “double standard”, and claimed that Washington described North Korea’s ballistic missile launch tests as provocative while remaining silent about the one that South Korea launched hours later.

At the end of the day, Moon and Biden have only themselves to blame for North Korea’s increasing aggression. During the Trump era, the US had managed to speak in a tough tone with the North Korean President while excluding China completely from the Korean Peninsula.

However, Biden came up with a confused policy of not speaking to Kim directly and engaging China instead. In the process, Biden also dropped South Korea into China’s lap and Moon sought the Communist country’s support to advance peace talks in the Korean Peninsula.

The US Secretary of State Antony Blinken, in fact, urged China to convince North Korea to denuclearise. But when you engage one enemy to mediate your disputes with another enemy, you are bound to end up with a disastrous settlement.

China has actually used North Korea as a client State and has ended up creating a security threat for both the US and South Korea. In Pyongyang, the US has given way too much leverage to China and China is simply using this leverage. In this chaotic situation, North Korea is going unabashedly belligerent, and Moon and Biden are clueless on how to handle the mess that they have created.