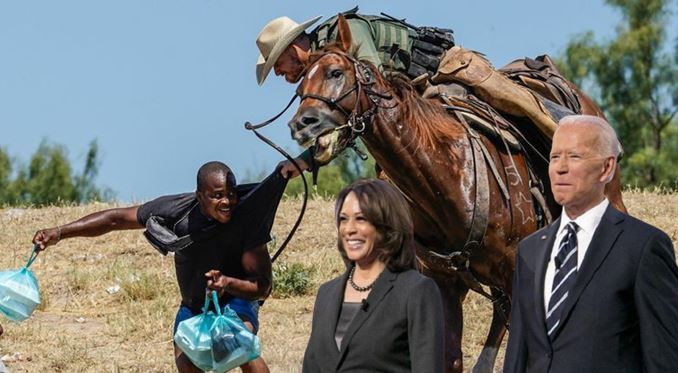 The political situation in the US is highly stacked against Joe Biden and the democrats. This has gone to such levels that the Biden administration is willing to let its supporters create an entirely false story and run with it. This has come to light again with the bizarre response of White House press secretary, Jen Psaki to the genuine questions by journalists. The fake “border patrol agents on horseback seen whipping Haitian migrants” story has completely collapsed, with the latest example coming from the New York Times, which quietly corrected one of their stories on the issue over the weekend, noting that they had “not seen conclusive evidence that Haitian migrants were struck with the reins.” Even though their piece still contains references to “whips” and “whipping,” Axios offered a type of correction.

.@PressSec says that the distinction between whipping immigrants and using horse reins does not change the circumstances regarding the investigation and disciplining of border patrol agents.

"Our reaction to the photos has not changed." pic.twitter.com/a6eAHF7N24

When asked if fresh evidence on the story has changed the Biden administration’s thinking about their previous statements practically condemning Customs and Border Protection agents of being no better than slave owners, press secretary Jen Psaki almost literally stated that facts don’t matter. This dangerous norm that has been set by the democrats, is going to haunt Americans in the longer term.

Also read: Biden is flying Haitian migrants to New York, Florida and other parts of the US, instead of deporting them

The admission by White House spokeswoman

For any government to deny the facts and stick to the agenda of its political allies even if it leads to the government supporting a proven lie, tells a lot about its intentions.

A reporter asked that the El Paso Times has walked back their claim that border agents were using whips to deter Haitian migrants. This is the kind of a controversy he said, some people are weighing what is a whip versus what is a rein. The El Paso Times put out a clarification saying, “It was not an actual whip.” The reporter added, “does that change anything for the administration, in light of the statements that were made last week?”

To which Psaki replied that she didn’t think anyone could look at those photos and think that was appropriate action or behavior or something that should be accepted within our administration. There’s an investigation. And added that the government will let that play out. But the government’s reaction to the photos has not changed.

According to Fox News, Border Patrol personnel claim that the Biden administration is “casting blame” on them for the border issue, following the release of disturbing photographs of authorities purportedly flogging detainees in Del Rio, Texas.

After at least 15,000 largely Haitian migrants crossed the border from Mexico in the hopes of being processed in America, a humanitarian crisis has erupted at the Texas border in Del Rio.

Vice President Kamala Harris, who was just appointed as the border czar, addressed the issue today, criticising agents who allegedly whipped Haitian migrants. She told reporters, “What I saw displayed… is horrific.” “That is not how human beings should be treated.”

While Homeland Security is currently conducting an investigation, others believe the agents were not using whips, but rather pulling the reins to pull their horses along.

Also read: By demolishing VOICE, Biden has sent a clear message to immigrants that they won’t be prosecuted for their violent crimes

The hypocrisy of the Biden administration

Psaki – and, by implication, this administration – is attempting to have her cake and eat it too. On the one hand, they’re attempting to appease the wokesters to whom they’re beholden by claiming that what was seen in the photos was in no way acceptable, but then she says an investigation is “ongoing,” as if that means the CBP agents at the centre of the controversy are getting a fair shake as this all unfolds. To put it bluntly, Biden administration is trying to bury the truth on Haitian migrants’ whipping story to push its sick agenda.